In the States, as you get older and are no longer a sexy teenager who attracts all sorts of whistles, you acquire the gift of anonymity, the ability to walk down the street or go into a store or restaurant, and have no one really notice you are there, if you don’t want. Here, in China, anonymity is totally impossible and you are rather like Ling Ling in the Washington Zoo. Last night at dinner, a little girl spent the entire time on her haunches in front of my table just staring at me. At the botanical garden, I was rarer than the rarest plant.

Tea – It turns out that Xishuangbanna has one of China’s 10 great teas – Puer Tea, that sells for $90/kilo. There is a clunk of this tea about the size of Charlie Brown’s great pumpkin that is 1000 years old and resides in the Beijing Museum. Here in the area there is a tea tree that is 1700 years old, and people trek through the jungle to pay it homage. They no longer pick the leaves. Rather, like a good stud horse, it has been left to thrive in the rainforest.

They make tea a bit differently here, rolling the leaves into small clumps that open up in hot water. Every Chinese has his special tea bottle of some strange color with all sorts of leaves floating around. What I can’t figure out is why, with all the good tea in the area, all restaurants serve the low grade teas of a very uncertain color.

Perhaps you would like to know how Dai boys and girls hook up with each other. Well the big time is during the water festival. For the big market, Dai girls cook a very special chicken. Then they take the chicken, a largish stool and a small stool to the market and sit there on their stool displaying their chicken. The Dai boys circle the market, checking out all the girls. When they find one they like, the say, “Your chicken looks really very delicious. Is it promised to anyone?”

If the girl finds the boy attractive and thinks she might like to get to know him, she pulls out the small stool and 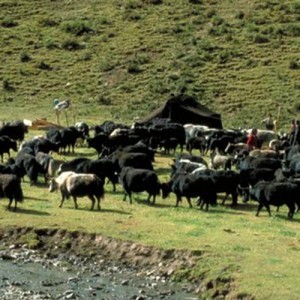 replies, “No, this chicken is not for anyone. You can have it.” The boy then says, “Oh, it looks so delicious we should share it with each other.” They then take the two stools and the chicken and find a private place where they can eat the chicken and get to know each other more. As my guide explained, “It is very romantic.” He noted that you can try to do this in the daily market, but it is not as good. It gives you a chance to really know a girl. Do you think we can get Raley’s to give this a try and add romance to the fryers?!

Perhaps you would like to know about Monklets. The Dai are quite religious and are Buddhists. Each village has a pagoda or monastery. It is not uncommon to have one child become a monk for three years and study the Dai language and scriptures in the monastery school. He also has to go to Chinese school, but this complements it and is a place for learning and retaining the culture. If a boy wants to become a monk, he will tell his parents. They will invite the relatives to come and give him some advice on how to behave. Then the relatives will provide a special feast with lots of meat. Even though you can get a bit of meat in the monastery today, tradition dictates that you serve meat, because in the old days there was none. Then the boy takes off his old clothes, bathes and dons monk clothes. His father carries him to the monastery, so that his feet do not touch the ground and he is not contaminated by his old world. At the monastery, he has his head shaven and begins his new life.

One more note about how history intertwines. The Thais say that Chiang Mai was founded in 1100 by Mengrai, who built the city and founded the Lanna dynasty where he saw three white barking deer. He is said to have come from China. Here in Xishuangbanna, there is a city called Monghai, named after a famous warrior, who is said to have built a pagoda in 1100 where he saw a golden deer, and is credited with being the founder of the Dai and Thai people. My guess is that Mengrai and Monghai are one and the same, particularly since it only takes 12 hours by boat to Chiang Rai down the Mekong.

What is the importance of Xishuangbanna? Well, it is in a critical geographical location on the borders of Myanmar, Thailand and Laos. Every day, tons of Chinese come down here, stay in hotels, use the prostitutes, and drive to the border to buy jade and gems (Aung San Suu Kyi be darned). Here is where the Chinese are building the big road to Myanmar that has so many Asian countries worried about the political influence it will exert. You can take a boat to Laos in two hours and Chiang Rai in 12. Three times a week, there are flights to Chiang Mai and Bangkok. Thus this is a serious location.

Other than the location, it does not compare with colorful Guizhou. The cultures here are very sinicized (is this a word?), unless you are way up in the hills in villages that are almost impossible to reach. The different people do live in villages in houses that echo the traditional styles, but much of their culture is lost and the young fight what still remains.

Well, I have done Xishuangbanna in spades: I have visited Dai and Aini villages and talked with the locals, while sitting on tiny stools that remind me that I am on a diet. In 36 degree heat (my math stinks, but the locals are really complaining that this is far too hot), we have explored the two botanical gardens Xishuangbanna has to offer in the most minute detail you can imagine, including portions no one sees. Yesterday the Japanese were collapsing under the trees and standing in herds under the sprinklers, as we trotted bravely onward. I have seen tea, pineapple, and other plantations, climbed tons of steps in the heat to photograph pagodas (I am really pagodaed out), and if I never visit another market again, it may be too soon. Forget Raleys forever. I have photographed pomelos and dried fish, families and headdresses, traffic jams and water buffalo jams.

So now we are off to Tibet and who knows what sort of computer access. The phone is working, thanks to Chou. I am saying farewell to the land of Chilis and good food and heading to the land of yak meat, dumplings and tsampa. I must admit, the thought of someplace cool is appealing.