Bangkok is a hub of travel for Southeast Asia and the most visited city in the world. Despite weeks of anti-government demonstrations and the recently declared state of emergency in the city, the unrest has been confined to very localized areas and is not affecting international visitors.

We at Myths and Mountains receive frequent reports from our Thai tour operators and guides in Bangkok. They are monitoring the situation around-the-clock and are prepared to make changes in touring itineraries quickly if the need arises. Thus far, no alterations have been necessary. As one traveler told us, “The city is operating beautifully.” Wandering on his own, this traveler accidentally bumbled into a demonstration, which he described as, “Peaceful…lots of families, people selling things like a Night Market, including T shirts with ‘Shut Down Bangkok’ written in English!”

For tourists, the main issue is the inconvenience of traffic disruptions. Our contacts in Bangkok say that some streets where protestors are demonstrating are blocked, but these can be avoided. Traffic is always horrendous in Bangkok, and now it is just more so, particularly in the core downtown business center and spaces near government buildings targeted by protesters. Nevertheless, Bangkok is a very large city, and business in most areas is unaffected, including the riverfront area where Myths and Mountains clients usually stay.

Important sites — the Grand Palace, the Temple of Dawn, Wat Pho, Wat Arun, the temple of the Emerald Buddha, 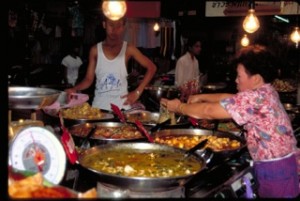 and the Chatuchak Weekend Market to name a few–are open as usual and safe for visitors. Banks, hotels, spas, and restaurants are open also. So are schools and colleges. No curfew has been imposed. However, shops and restaurants downtown may close during a demonstration if necessary.

All airports are open and operating on schedule. Pick up times for transfers to the airport are four hours prior to departure as a precaution in case of any road blockages or diversions.

Public transportation–the Skytrain, subway, boats, ferries, and buses are operating. Taxis carrying visitors are issued stickers that allow them to pass through areas that may be blocked.

Of course, anyone visiting Bangkok needs to be flexible and vigilant. Although we’re told that the protests are generally peaceful, we advise you to avoid joining the demonstrations and to stay away from those sites, especially at night. 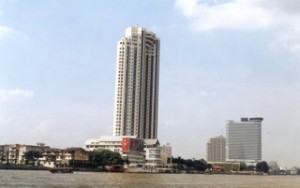 On January 19, the U.S. Department of State joined 45 other countries and issued a travel alert, cautioning Americans about the potential risks of traveling to Thailand, particularly Bangkok. Thai officials issued the state of emergency on Sunday, February 2, as a result of disruptions at voting polls.

We at Myths and Mountains are keeping a close watch on the situation in Bangkok and throughout Thailand, and will keep our clients and friends informed. Along with news and government reports, we rely on our contacts on the ground in Bangkok for information. They are monitoring events 24/7 and reporting to us frequently on the situation in the city. We will be passing that information on to Myths and Mountains clients regularly. As always, we are available any time if you need further information.