“We had seen a whole mountain range, little by little, the lesser to the greater until, incredibly higher in the sky than imagination had ventured to dream, the top of Everest itself appeared.” — George Mallory

Psychologists say that one of the things that separate us from apes in the jungle is our uniquely human ability to imagine being somewhere else. Wherever that “somewhere else” is in your mind’s eye, you probably regularly feed your imagination on traveler’s tales, movies, and photos. From time to time you may even eat the food of the land you long to visit–for Nepal, think momos and dal ghat.

Now, though, you can boost the quality of your imagination with the fantasy-inducing equivalent of jet fuel–a computerized zoom in, zoom out, pan-able landscape panorama of Sagarmatha “Head of the Sky.”

To get a sense of Everest-size scale, click here and look closely at the panorama by famed photographer and mountaineer David Breashears. Zoom in beneath the second green box from the left until the prayer flags come into view. To almost feel how big those mountains are, slowly zoom-out until the blue and yellow tents and huts of the trekkers and climbers at basecamp become indistinguishable from the rocks and boulders. (For other examples of Rome, the Yosemite Valley, and Corfu, go to krapano.com.

Yes, this is just how the camp looks from Kalapatar–literally, the high point of Myths & Mountains’ popular Everest Base Camp trek.

When virtual traveling falls short of feeling the wind, smelling the air, and watching the light change the view, let 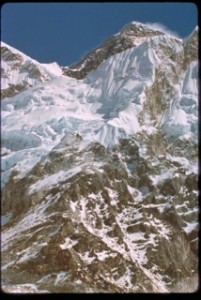 Myths & Mountains take you there. (Isn’t your imagination begging for a reality check?)

We fly to Lukla, which translates “place with many goats and sheep.” It’s the staging area for treks in the Khumbu region of the Himalayas. From there, we trek eight days to Kalapatar (18,450 feet), where the South Col of Everest and the west and south faces–and the view of Breashears’ photograph–can be seen. Trust us, whatever you imagined Everest to be can’t match the thrill of seeing the majestic Himalayas for yourself.

Along the way to and from Kalapatar, you’ll visit tea houses, shop in Namche for the trekking gear you forgot, listen to monks chant in Thyangboche monastery, sleep in local lodges, and talk and laugh with the locals. Imagine that!