Travelers are fond of saying of places they visited long ago, “You should have seen it before all the tourists came.” It’s a bragging right of sorts in a world where the “discovery” of a place may mean a change for the worse in the future. And the Galapagos Islands–the archipelago of 19 islands some 600 miles off the Ecuadorian coast — is not immune to change.

“Yes, tourism has changed, and, as Darwin described change in his theory of evolution, it’s survival of the fittest,” says Myths and Mountains VP Allie Almario, who has made 13 trips visiting the Galapagos over the past 25 years. “The tour operators know that the most eco-friendly ships who practice sustainable tourism will do the best.”

“In some ways travel to the Galapagos Islands is a model for ecotourism,” says Matt Kareus, Executive Director of the International Galapagos Tourist Operators Association (IGTOA). Nevertheless, people who see change as either black or white might find themselves in a grey area of contradictions when it comes to the Galapagos. Here is a reality check on some rumors:

Rumor: The Galapagos Islands aren’t the same as they once were.

Reality: In twenty years, the number of visitors has quadrupled, from 46,818 in 1993 to 204,395 in 2013. To accommodate the increase in tourists, there are now more ships and planes, more hotels, three airports instead of just one, and a burgeoning, year-round population of about 25,000. 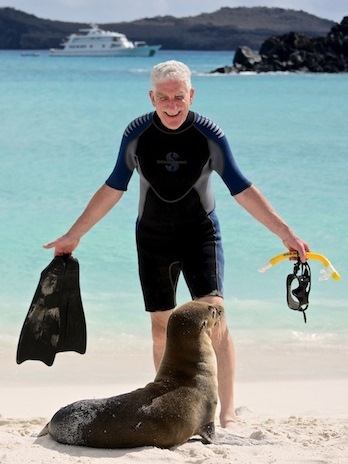 Despite the dramatic growth in tourism, the actual experience of exploring the Galapagos National Park and seeing wildlife is essentially the same. “That’s largely because there are strict controls over how many boats can come to a designated landing site each day,” says Kareus. On most islands, the number of visitors is limited to small groups, depending on the landing site the number of groups at a landing site at anyone time is carefully controlled. That’s why you’re unlikely to encounter the swarming hoard of camera-wielding tourists that you might imagine when considering the total numbers of tourists in the Galapagos.

There are more rules today than in the 1960’s when there were only 2,000 visitors a year. The long list of do’s and don’ts range across all behaviors from not getting within 6 feet of the birds to not buying tortoise shell or sea lion teeth souvenirs. See Galapagos Park Rules for a complete list.

Rumor: The Galapagos Islands are a cash cow for Ecuador and officials are only doing enough conservation to keep tourists coming.

Reality: “Tourism does put a lot of money in the country’s coffers,” says Kareus, adding, “but that’s not necessarily a bad thing. As David Attenborough said, ‘Without tourism, the Galapagos would not exist.'” Considering the hundreds of millions of dollars tourism pumps into the economy, the country cannot afford NOT to make a serious effort to preserve it. (Interesting to note that user fees paid by tourists and tour companies have not increased since 1993!)

True, there was some frustration with how the Galapagos National Park was being managed in the past, but its placement on the List of World Heritage Danger sites in 2007 was a wakeup call for greater control to overcome what UNESCO said were threats posed by invasive species, over-fishing, and unbridled tourism. As a result of the “significant progress” made by Ecuador, and the government’s continuing conservation efforts, UNESCO took the Galapagos off the danger list in 2010.

And there are other organizations financially supporting conservation and monitoring the impact of tourism. The Charles Darwin Foundation is the most well known for funding scientific research that influences conservation activity. The World Wildlife Fund, WildAid, and the Nature Conservancy are also active in the Galapagos.

Rumor: You can no longer go to the islands you want to visit.

Reality: Thanks to the “Special Regime Law for the Conservation and Sustainable in the Province of the Galapagos” passed in 1998, which is inscribed in the Ecuadorian Constitution, a visitor management system is in place to regulate visitor permits and quotas while visiting the Galapagos.

Licensed tours–and all multi-day tours are licensed–may only visit the islands on an itinerary approved by the Directorate of the Galapagos National Park. This is done well in advance, so do not wait until you get to the boat to make a request. If you want to visit a particular site of the 70 terrestrial sites in the park, choose the tour company that has that island on its itinerary and confirm that the boat goes there when you book your trip. It’s as simple as that.

Currently, there are 83 vessels in the waters of the Galapagos Islands and since 1978 there has been a set limit on the number of sites they can visit. Currently, the Directorate has set a maximum of 60 on the number of sites that can be visited on a two-week tour and 28 sites on a one-week itinerary. A map and list of terrestrial sites and marine sites for scuba diving, snorkeling, and kayaking are available on the Galapagos National Park website.

Yes, visiting the Galapagos has changed, but with continuing conservation efforts by the government, the non-profit organizations, the tour companies, and, most important, aware tourists, the islands will always be a “living museum and showcase of evolution.”

We highly recommend you travel with Galapagos experts like Myths and Mountains to help you make the right decisions for your trip.