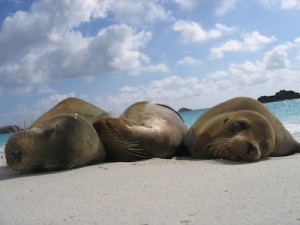 “When is the best time to go to the Galapagos?” is the first question that most people ask who are thinking of traveling there. Our answer: “Anytime.”

“That’s because no matter when you go, something on the islands is breeding, courting, nesting or giving birth, says Allie Almario, Myths and Mountains’ resident Galapagos expert who has visited the islands 13 times in all seasons.

There are basically two peak seasons: mid- December through mid-January when it’s summer in the Galapagos and mid-June to early September when North American and European school students are on vacation.

Every season has its pluses, a few minuses, and a trade-off or two. Before you turn in your “Personal Time Off” request or plan your family trip, check out this season-by-season guide and think about the wildlife you’re most interested in seeing.

It’s the Garua season when there may be mist in the morning and some clouds, but the atmosphere is dry the rest of the day. Air temperatures range from high 60’s to high 70’s (see chart below). From June through October, the cold Humbolt current flowing up from the tip of South America is strong, cooling the air and water.

Wildlife watch: Thanks to the cool current, there are more nutrients in the water and marine life is quite active. (Divers and snorkelers often prefer this time of year even though wearing a wet suit is a must.) More fish mean more seabirds, too. Now is the time to see the blue-footed boobies do their famous mating dance.

The good news is that everything warms up as the Humbolt current weakens. Air temperature ranges from low to high 80 degrees F. Seas are calm, and flowers bloom. The sun shines most days, but there are also brief periods of drizzle or showers, especially later in New Year, which is why this time is called the rainy season. But no worries! Most people are wearing wetsuits anyway when snorkeling! Underwater visibility is greatest in March and April when water temperature peaks.

The water temperature is determined by the three currents that meet in the Galapagos, most noticeably, the Humbolt current, which brings cooler 70-degree waters during the Garua season. (In an El Nina year, water temperature may be about 5 degrees cooler.) And temperatures vary somewhat on different islands. West of Isabela, for instance, the water can be as cold as 60 degrees F.

Here’s a month-by-month temperature chart to help you factor climate into your decision: 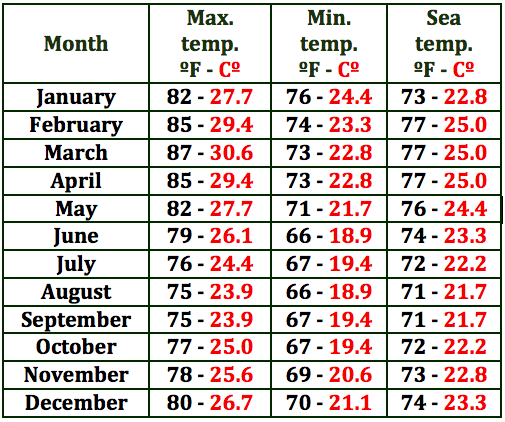