When travelers call us about a trip to Tibet, our first question is, “Why Tibet?” The reason we ask is because there is another option that might be even more interesting, less expensive, and just as gratifying. It’s Ladakh, also known as “Little Tibet.”

Don’t get us wrong. Tibet is a must if Lhasa is on top of your bucket list or visiting the Jokhang temple is a lifelong dream, as it is for many Mahayana Buddhists. But if experiencing the Tibetan Buddhist culture, enjoying festivals that will not be cancelled and appreciating the stark and breathtaking landscape of the Tibetan plateau are your main interests, Ladakh offers it all.

Tibetan culture in Ladakh has been allowed to flourish unimpeded by 20th century political clashes and restrictions. And the culture has a centuries- old history in Ladakh: Tibetans began migrating from western Tibet, or Guge, in the 7th century. During the same period, Buddhist texts were being carried across the Himalayas, and the sage Padmasambhava was bringing Buddhism to Tibet, Bhutan and neighboring countries. Today, Mahayana Buddhism is the main religion of eastern Ladakh. (The western part of the region is primarily Muslim). The Dalai Lama is free to visit, and he does with some frequency. This July, for instance, His Holiness will be in Leh, Ladakh’s capital city, for the first three days of the Kalachakra festival.

Ladakh, the “land of mountain passes,” is crisscrossed by two great mountain ranges, the Himalayas in the south and the Karakoram to the north. It is within the Jammu & Kashmir state, which juts upward from India and is bordered by Pakistan to the northwest, Xinjiang, China to the north, and Tibet to the east. And, yes, a river–the Indus River–runs through it.

Ladakh and Leh, the capital city, is the site of many festivals and functioning monasteries. At almost any time of year, we can schedule your trip to coincide with a major festival. And your travels, including treks for those who wish to experience the high desert and deep gorges on foot, can be organized around visits to several important monasteries. We can also include a journey to Kashmir to the west and/or south to Dharamasala, where the Dalai Lama resides. Flights can be arranged, but going by van allows for seeing spectacular scenery up close.

As Buddhism spread, monasteries to house the monks and Lamas were constructed. By the 11th century there were over 100 in what is today Tibet and Ladakh. Here are a few that are typically included on a Myths and Mountains itinerary–two of which date back to the 11th century.

Like many monasteries, this 600- year-old one sits on a hilltop with a panoramic view of the Sindh Valley. With ten temples, Thiksey (or Thikse) is among the largest monasteries you can visit. It is said to be one of the best organized, since the incarnate lama actually lives there, along with about 100 monks and a school for children. Thiksey is also home to a nearly 50-foot-tall Buddha statue, the largest in Ladakh. Lovely murals decorate the walls, and an image of Sakyamuni (the past Buddha) in the central hall is a main attraction. Cham (mask) dances take place here during the annual Thiksey festival. 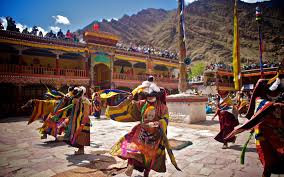 In a remote valley on the bank of the Indus river about 25 miles from Leh is one of the most important and largest monasteries in Ladakh. Hemis is actually a unique complex of temples built in the 17th century and based on the concept of a three-dimensional mandala. The two-day Hemis festival celebrating the birth of Padmasambhava, the founder of Tibetan Buddhism, is one of the most famous festivals in Ladakh. The highlight is a masked dance performed by the colorfully robed Lamas celebrating the victory of good over evil. If you are really fortunate, you may see one of the largest thanka paintings in the world, which is displayed only every 11 years.

Unlike other monasteries, Dak Thok (aka Takthok, Thag Thog, and Thak Thak) is built within and around a cave about 28 miles from Leh. It is the only Buddhist monastery of the Nyingma (the “school of the ancient ones”) tradition in Ladakh. The name Takthok means, “rock roof.” Padmasambhava lived there and meditated for three years–or so the legend goes. Just outside his small cave are images of him and Avalokitesvara, the deity of compassion. It’s believed that a large footprint on a nearby rock slab belongs to Padmasambhava. The monastery was initially created when a Lama walled in the cave and built an entrance door. Later a three-story building with an assembly hall was constructed, which over the years has been modified several times and now is home to about 50 monks. Attending the lesser-known Dak Thok festival, often at the same time as the Hemis Festival, is a treat, as there are few tourists and many Ladakhis. 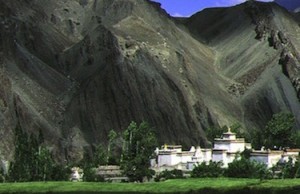 About 44 miles from Leh on the banks of the Indus river is the village of Alchi and a thousand-year-old monastery and temple complex–the oldest in Ladakh. The architecture is typically Tibetan with flat roofs and multiple windows. Thousands of images of the Buddha and murals dating as far back as the 11th century decorate the monastery, and some are extraordinarily colorful. You’ll see some of the oldest wall paintings in Ladakh as well as major shrines, such as the Manjushri Temple, with its painted wood ceilings. Another distinguishing feature of the monastery is the series of chortens marking the entrance. 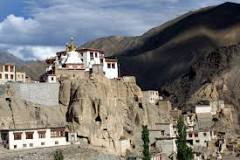 Like Alchi, Lamayuru is ancient, dating to the time of the Rinchen Zangpo (958-1055 CE), the great builder. It’s thought that Lamayuru was actually built by the King of Ladakh and given to Zangpo. Also known as Tharpa Ling, or “place of freedom,” Lamayuru is one of the largest monasteries in Ladakh. Nearly 80 miles from Leh and perched on a steep mountain, it contains many works of Tibetan Buddhist art–colorful murals, thankas, and statuary–and is home to about 50 monks. The surrounding landscape is “otherworldly” and the drive definitely epitomizes “adventure travel” at its best!