For 25 years, Myths and Mountains has been taking travelers beyond the guidebook sites to experience different cultures through their crafts, natural history, spiritual centers and healing traditions. Now, these kinds of trips have a name — experiential tours — and it’s a hot trend in worldwide travel.

An American Express survey last year found that 72% of respondents said they would rather spend money on experiences than things. That certainly describes the typical Myths and Mountains traveler. Take the six women who took our Untamed Cambodia journey last winter.

Of course, no one going to Cambodia wants to miss the Royal Palace and Angkor temples — and Arta, Terri, Roz, Alain, Susan and Nancy were no exception. But Untamed Cambodia, named a “Tour of a Lifetime” by National Geographic Traveler last year, offered the women opportunities to spend time in the wild animal rescue facilities that had attracted them to the Myths and Mountains Cambodia trip in thefirst place.

Some of the women were or had been involved with the Como Zoo and Conservatory in St. Paul, Mn., so bathing elephants at the Elephant Valley Project and playing with the sun bears at the Phnom Tamao Wildlife Rescue Center were experiences that still give them goose bumps. Their 13 days experiencing Cambodia also included trekking through the jungle with local guides, floating in small boats down the Tonle Sap past floating villages, and meeting people in other villages.

Arta says spending the day as a bear keeper at Phnom Tamao was “…an amazing, amazing experience.” As a member of the board of directors of the Colo Zoo, she was aware that sun bears were in trouble, but she was not familiar with rescue programs such as this one in Cambodia.

Sun bears are in danger of becoming extinct as commercial hunters ruthlessly capture them. They may be killed for their paws, the essential ingredient in bear paw soup, a gourmet Asian delicacy that is said to promote health. Or they are held captive in “bear farms,” where their gall bladders are continuously and painfully drained of bile for use in traditional Chinese medicine.

The bears at Phnom Tamao were the lucky ones. The Wildlife Rapid Rescue Team has rescued them for several reasons, including confiscating them from illegal wildlife traders. The bears and other rescued animals are cared for at the Center until they are healthy enough to be released in the wild.

“We did enrichment exercises with the sun bears to bring out some of their natural instincts and break up the boredom,” said Arta. “We tossed balls with holes filled with food to them, and the bears would hold the balls between their front and back paws to get the food out. It was such fun to watch.” 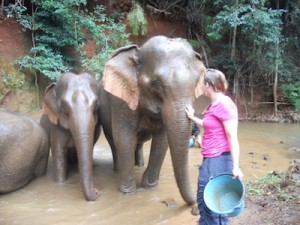 What surprised Arta was how modern the animal care was. “The animals are very well cared for and the local people working at the facility were informed and educated. I’m not sure what their background was, but they certainly knew a lot about sun bears.”

“It was painful to hear about how the bears were treated but also hopeful that something was being done to rescue them,” said Terri. She is a therapeutic harpist, who has worked with primates. The Cambodia experience inspired her to compose three pieces that will be recorded later this year.

Nancy, who is a volunteer at the Como Conservatory garden, didn’t find the birds she was hoping to see. “We made too much noise walking through the jungle,” she said. But seeing the floating villages and having time to wander through a rural village and meet the locals was especially memorable for her.

The experience that caused her goose bumps? Trekking through the Mondulkiri jungle to the Elephant Valley Project, which rescues overworked elephants from Bunong families. The project pays the elephant owners what their animals would have earned doing exhausting jobs like dragging timber from the jungle. “It’s awin win situation,” says Terri.

“We walked down a steep path and then, just like magic, there was an elephant!” said Terri. “It brought tears to my eyes. I thought elephants would make a lot of noise walking through the jungle, but they don’t. They are so quiet.”

We couldn’t help but ask, “Did you know this kind of ‘experiential’ travel is a hot trend now? ”