For train lovers and “slow” travelers, Ecuador’s newly restored, century-old railwayline — the Tren Crucero — is a way to “cruise” from the country’s capital city of Quito to Guayaquil, its commercial center on the Pacific. The four-day trip can also be taken in the reverse direction, which makes it a perfect add-on trip post-Galapagos island hopping.

That’s what Myths and Mountains’ travelers David Axelrod and his wife Linda Feferman did. Rather than take the 40-minute flight to Quito, they opted for seeing the country by rail. David, a train fan, was intrigued by an article about the newly restored Tran Crucero in the Financial Times, and the trip, which includes a sojourn through the “Avenue of the Volcanoes,” did not disappoint. In fact, it just won the title of South America’s Leading Luxury Train Journey from the 2014 World Travel Awards.

“The cruise train is for people who like getting into the back country and traveling in an interesting way,” says David. “We went through parts of the country that few tourists visit.” Since having the train come through their village is a new experience for the local people, David said the people were friendly and pleased to have visitors. 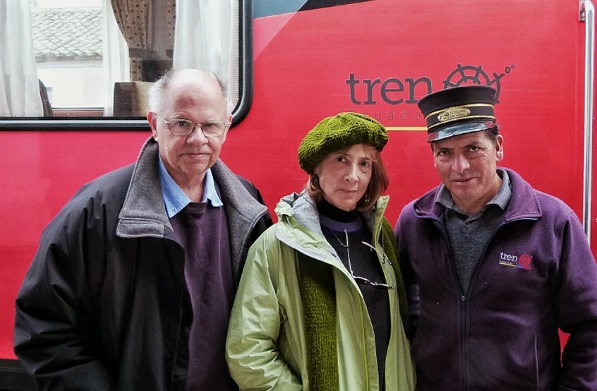 Although David cautions travelers not to expect Orient-Express luxury, he says the coaches were quite comfortable. Since they are restored in the Spanish Baroque style, one feels transported in time as well as place.

The four coaches of the Tren Crucero, or “cruise train,” are alternately pulled by a reconditioned, authentic steam engine and a gleaming new diesel, depending on the track and the terrain. It carries as many as 54 passengers nearly 300 miles, through villages, orchards, and fertile farmlands and down deep gorges and up cliff-side switchbacks, including crossing the precipitous “Devil’s Nose,” which is said to be the trip’s most exciting moment.

A bilingual concierge in each car answers questions about the passing landscape and points out landmarks travelers wouldn’t want to miss by looking in the wrong direction.

Along the way, the train stops in towns and villages for travelers to enjoy local cuisine, folk dances, and craft markets. At some stops, passengers are bused to popular sites, such as the national park surrounding Cotopaxi, one of the world’s highest active volcanoes.

“The train crew warned us about altitude sickness and then kindly provided us with unlimited amounts of coca tea which is claimed to cure it,” says David. “I’m not sure it helped with the altitude, but we definitely left the train with a buzz on!”

There are several off-the-beaten track experiences, too, like a tour of working rose and cocoa plantations, which were a surprise for David and Linda. If you’re lucky, your stop at the town of Guamote will be on market day, when everything from fabric to pigs are for sale.

“We got off in one town, which seemed quite dismal at first, but when we turned the corner, there was

a spectacular 19th century castle-like structure with strolling musicians,” he says. “Even the Ecuadorians on the train were surprised!”

Each day ends near a hacienda, where passengers dine and spend the night. The first night’s accommodations at a hotel outside Bucay were fine, says David. But the hacienda stays were among the highlights of the trip. “They were places we never would have known about,” says David.

David and Linda spent the second night at the Hacienda Abraspungo outside Riobamba. Set against a backdrop of Andean peaks, the hacienda is built in the traditional colonial style and is a working estate.

Another highlight was lunch at Hacienda San Agustin de Callo, which is built on the site of an Inca palace and has changed little since the 18th Century. Its previous owners include several presidents of EcuadorFeferman and famous bullfighters. “After lunch, two of the hacienda’s herdsmen brought a huge pack of llamas into the courtyard 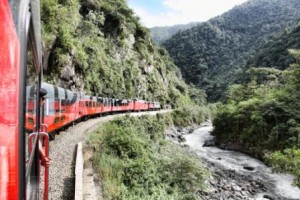 for our amusement,” David recalls.

On the third night, David and Linda were guests at the Hacienda La Cienega, a historic inn dating back to 1695 outside Latacunga that was once home to the Marques family, staunch defenders of Simon Bolivar.

“Many people going to Ecuador do their own tours, but this is quite a unique trip. We felt we had an Ecuador experience that few people have had,” says David. And they met other interesting travelers, many of whom were Ecuadorian seeing this part of their country for the first time.

David offers some good advice for travelers taking the train from Guayaquil: “The train leaves from the station in Duran which is a 20-30 min drive from central Guayaquil. It’s a good idea to use a fixer and driver because the procedures at the station are somewhat chaotic, and English is not widely spoken by the station staff.”

David and Linda had traveled with Myths and Mountains before, and they love that almost any trip they want to do can be customized to their standards.