“Move the tents,” I told my friend Dawa, “It’s going to pour for two days and we need to set them up so rain and wind won’t wreak havoc.” He looked at me as though I was crazy.

“I bet you the pants you’re wearing we are getting a storm,” I taunted.

The day had been sunny and beautiful, yet suddenly clouds were coming up over the horizon, dark clouds that should not have been there on a day like this or at this time of year. I did not like it. In 1987, I had been caught in a heavy blizzard at 15,000 feet that lasted for more than 36 hours on a route rarely traveled in the Everest region. We ended out having to break trail over two precipitously difficult 17,000-foot passes down to safety below the tree line.

Now, as we were just about to head up above the snow line on a side path of the main Annapurna route, the weather looked exactly as it had in 1987. Although fall in Nepal is usually perfect trekking weather once the monsoon season is over in early October, occasionally cyclones or gales sweep up through the Bay of Bengal with heavy winds and blinding snowfalls. They appear suddenly to those who don’t watch and can’t read the clouds. The horrendous conditions block passes, cause avalanches and bring death to those who don’t know the trails and are caught unprepared in the wrong place.

Thorong La is just such a “wrong” and dangerous place. Articles about the tragedy that befell so many trekkers attempting to cross the pass comment that the Annapurna Trail is nicknamed the “Apple Pie Circuit,” since there are so many lodges along the way and apple pie is a favorite menu item.

Many Nepal trekkers sling their own backpacks over their shoulders and march casually off on their own, map and apple pie in hand, to cross Thorong La. At the top of the pass, they descend first to the holy town of Muktinath, and then walk farther to Jomsom and fly back to Kathmandu.

Other trekkers fly to Pokhara, the jumping off point for the Annapurna circuit, hire a local porter or guide on their own to help, and then start climbing. Most of the time they are fine and safe. 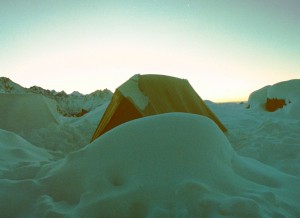 Nepal Lumiding SnowBut the Himalayan environment is not consistently benign, and when a storm system, such as the Hudhud Cyclone, vents its fury, these independent trekkers tend to suffer the most. Not understanding or underestimating the danger the weather can pose, the independents attempt to cross the pass when no one should, slip off the sides of the trail in blinding snow, suffer from hypothermia, and are buried by avalanches or drifts.

Storms such as the Hudhud Cyclone suggest that tragically, too many of these independent travelers are “penny wise, and pound foolish,” putting their lives at risk. Though more expensive, choosing to employ a reputable, experienced trekking company has real advantages. For example, our Myths and Mountains ground operator in Kathmandu had several groups in the area during the recent storm. They contacted the Sirdar, or leader in Pisang, two villages below the dangerous Thorong La pass, told him that a storm was coming and ordered him to go no farther and stay where he was. All of his guests were safe, warm and comfortable, while others struggled or died in raging blizzard over the pass.

As for Dawa, our group and me, although we were out of Kathmandu contact range, I recognized the weather warning signs. That night, as I predicted, a raging storm hit the area. Where we were camped, rain and wind pummeled the tents relentlessly. Higher, there was a blizzard such as that caused by Hudhud, and trekkers suffered badly. Had we not moved the tents and kept our camp below the snow line, we would have been in serious danger. For being correct, I now own Dawa’s pants!

Nepal Thorung LaThe moral of the story: Don’t take the Himalayas for granted. They will lash out unexpectedly and can be deadly. Here’s what almost 30 years trekking the Himalayas has taught me: 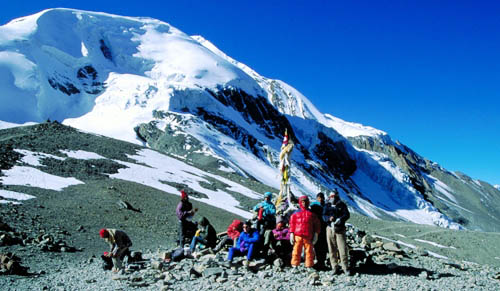