As a child, I had a pet guinea pig, Honey, with a personality as sweet as her name. Caught up in the thrill of new Peruvian tastes and adventures, I admit I ate some of her kind. It’s my husband Fred’s fault. He ordered it at Limo, a restaurant in Cusco. One of our food habits is that we always switch plates and share dishes. For us, part of our Peru adventure with Myths and Mountains meant testing our “foodie” status throughout the country. 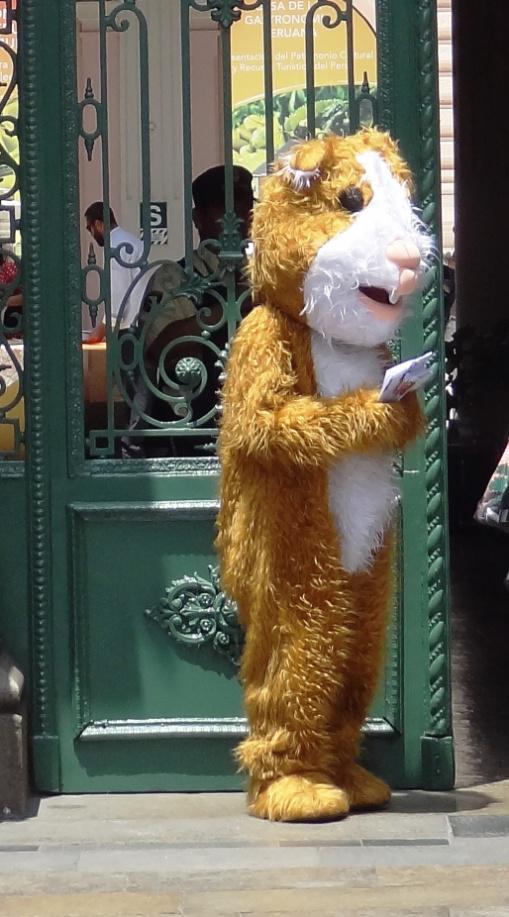 “Really?” I said to him as he finished asking for “Cuy confit.” In Ecuadorian, Peruvian and Bolivian Spanish, “cuy” means guinea pig. Confit preparation seals the meat in oil, intensifying the flavor.

His dish arrived, looking like a UFO—unidentifiable fried object. He broke into it with knife and fork, picking around for meat.

My turn came and I quickly jettisoned silverware for fingers. I grabbed a haunch, holding the top thigh between my left thumb and finger, with my right hand grasping the leg’s lower portion. Barely an inch separated my hands, the leg so small I looked as if I just joined a little girl’s dollhouse setting for a pretend dinner. The fingernail-sized portion of meat I retrieved felt greasy, with a slightly gamey, dark meat flavor. I picked around for more, finding the feeling similar to dining on quail and other boney birds—not enough calories to offset the work spent getting them. 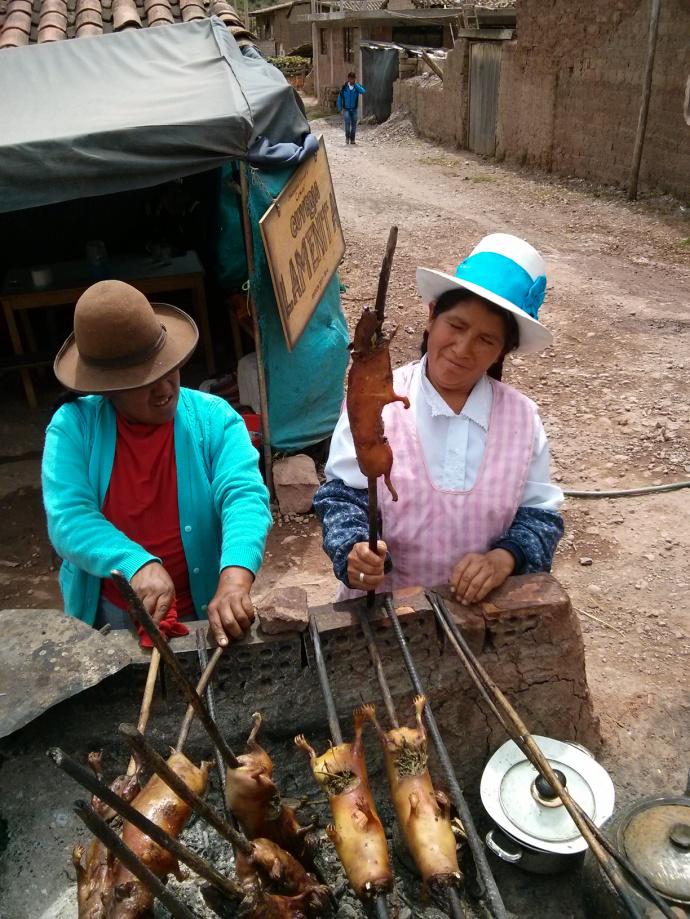 We later described the meal to our guide Cris, who grew up in a Quechua village an hour from Cusco.

“It is better prepared at home,” he said. Following up on my curiosity about the dish, he introduced me to some women at a roadside roasting stand in the Sacred Valley, where Incas once ruled the South American world. Wearing traditional mountain skirts and headgear blending fedora and top hats, they skewered the skinned little pigs by ramming sticks into butts, passing through the trunk and out their mouths. Green herbs filled slit bellies as the women placed the creatures on grills. Starting out whitish, the cuy crisped to a reddish brown, little paws curling. Pointing to one woman, Cris commended her economic foresight.

“She came out here alone and started cooking,” he said. “And now look. It is a booming business.” He breathed deeply. “It smells so good. I would love to eat now, but we must go on to Pisac.”

“Right!” I said with relief, happy the cuy experience would not extend beyond photography.

That evening I posted one of the photos on Facebook.

“What is it?” came one curious response.

That’s the one about a rat.

Brandishing the title “Gastronomic Capital of South America,” Lima serves cuy dishes but emphasizes seafood. No one argues that Lima rules the world when it comes to cevicherias, small, lunch-only operations that specialize in marinated seafood. Among these cevicherias, many experts like food guru Anthony Bourdain rate Chez Wong as the best.

We learned this during trip research as we watched the Peru episode on the first season of Bourdain’s “Parts Unknown” series. Whether grabbing an octopus or flounder, Chef Javier Wong wielded his knife with the skill and speed of a Ninja warrior. Quick chops to chile, herbs and other ingredients had started us salivating.

“We have to go there!” said Fred, a statement that proved the proverbial “Easier said than done.”

Wong’s already prominent reputation skyrocketed after millions watched him on CNN and Netflix. Even before the Bourdain plug, he never needed to promote the restaurant with such marketing tools as a webpage, Facebook or contact information. As a result, getting one of the ten tables in his small room takes Olympic-medal perseverance.

A member of Les Clefs D´Or international, our Miraflores Hilton concierge Juan Roberto had the clout and contacts to make reservations, assuring us a 2 p.m. lunch the day we flew to Lima from Arequipa. It should have worked fine, but the plane left late. Then we hit Lima traffic, which would lose a race with a sloth. Two accidents jammed cars further—though that hadn’t seemed possible. We sat in a taxi next to an ambulance with blaring siren and flashing lights. It couldn’t move either, and I cringed, hoping the patient inside wasn’t in too much pain.

I also cringed as our 2 p.m. deadline drew closer. I e-mailed Juan Roberto, who spotted us the second we walked in the hotel, bedraggled from travel travails. “They can only hold the table until 2:30, so you must leave now,” he advised, saying we could drop our luggage and check in later.

Popping into another cab, we moved as fast as possible—a leisurely pace by most measures but with jaguar speed in Lima. We passed scores of drab, two-story rectangular buildings in tans, beiges and grays. We entered a street full of businesses selling car tires. The cab driver pulled over and asks for specifics about Chez Wong, driving up a block then turning right on yet another dreary looking street.

He pulled over by a small, two story house with a man standing out front—no sign, no letters, no outstanding appearance. As Fred paid the driver, the man in front asked “Holabird?” I nodded as he opened the brown door and led us to a tiny room filled with diners’ happy reverberations bouncing off the walls.

Framed photos, a signed apron and articles lined one white wall. The biggest picture featured Chef Javier in between Bourdain and Eric Ripert, chef at our favorite Manhattan restaurant, Le Bernardin. Articles analyzing and rating ceviche dominate the wall, illustrated by instantly recognizable photos of the chef with his trademark large lensed eye glasses and white cap. To the left of the wall, the chef himself stands behind a counter, whipping out his blades and turning a red chile into wafer thin, see-through slices.

Behind him in a brick-lined kitchen, two assistants worked. The doorman came to tell us our order—there’s no menu so you either say yes or no to the several courses offered.

Yes!” we said to pulpo ceviche. We love octopus and this ranks among the best we’ve ever had, nicely textured with no slime or weirdness. Chef Javier’s marinade balances pungency with smoothness, chile adding tang without overpowering heat.

“Yes!” we said to flounder ceviche. This meant Chef Javier pulled out a flat, elliptically shaped flounder nearly the size of a car steering wheel and began his showcase knife tricks. The dish arrived within minutes, enhanced by papaya pieces among the fish and topped by chopped pecans.”

With faces practically sunk in our food dishes, we failed to notice that everyone else left. Chef Javier sat against the photo wall, talking animatedly with a man his age. We approached and asked for a photo.

“First, Javier has a question for you,” said the other guy, who turned out to be Javier’s boyhood friend visiting from Connecticut, where he sat on a city board. “Can you trust politicians?”

I looked at the politician. “Of course not!”

The two laughed uproariously and patted for us to join them. Conversation swirled from food to places to movies. A stubby cigarette in mouth now that he no longer cooked, Javier offered us beer as talk continued. He could do what he wanted—after all, we sat in the kitchen of his home. Not your typical restaurant.

The afternoon grew late and Javier saw that a taxi came, first proffering us with two souvenir glasses festooned with a caricature of him—cigarette in mouth, big glasses and small cap. We can’t look at those glasses without breaking into big smiles.