From My Son Sanctuary to Angkor Wat

Angkor Wat and the Khmer civilization of Cambodia are known worldwide, but Vietnam also boasts the ruins of an ancient culture – that of the Cham.

Today, the Cham villagers you meet in Hoi An and along the Mekong are just one of Vietnam’s 54 ethnic groups, but a millennium ago, the Cham were the leading denizens of the Kingdom of Champa, “the grand emporium of Southeast Asia.” A marvelous testament to these early Vietnam colonists is the temple complex of My Son.

The My Son ruins were named an UNESCO World Heritage Site in 1999, and they are said to be the historic and artistic equal to the ancient ruins of Angkor Wat, Bagan, Borabudur, or Ayutthaya. 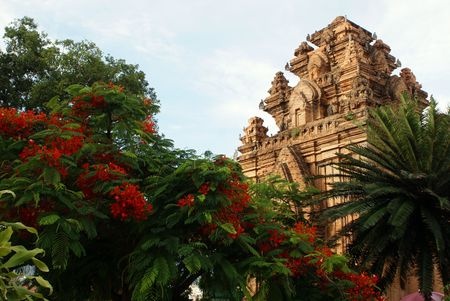 For a thousand years, from 500 to 1500 AD, the coastal Champa Kingdom was a kind of Silk Road of the sea. Traders from India, Java, and China constantly traveled the coastline, bringing with them their religions and myths. Gradually over the centuries, the Cham incorporated Hinduism, Buddhism, and Islam into their culture. As you tour the temple ruins you’ll see how the mixed cultures is expressed through reliefs, sculptures and architecture.

My Son and Cham Culture

My Son, or “beautiful mountain,” is encircled by mountains, which made it a strategic site for the capital of the Champa Kingdom. The My Son Sanctuary is a series of 70 tombs and towers built as temples to the Hindu divinities Krishna, Vishnu and Shiva. Another unique characteristic of the Champa ruins is that the structures are made almost entirely of fired brick.

According to UNESCO, the early Cham were remarkably sophisticated and skilled engineers. They were temple builders and talented artisans. The elaborate reliefs of Hindu mythology at My Son are what remain after centuries of conflict, including the Cham battles with their Khmer 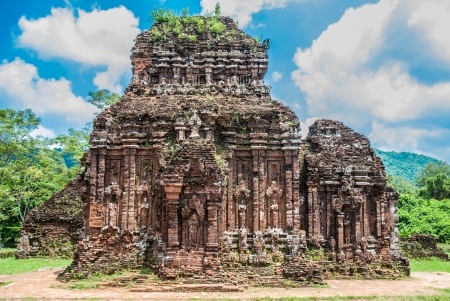 My Son may not be as common on bucket lists as Angkor Wat, but, as the longest inhabited archaeological site in Indochina and one of the foremost Hindu temple complexes in Southeast Asia, the area is well worth a visit.

The Influence of Indian Traders

Indian traders influenced the Khmer people as well as the Cham. But unlike the Cham, the Khmer migrated down the Mekong River from China to Indochina. The greatest period of the Khmer Empire was the Angkor period. It corresponds closely in time to the Cham Kingdom from the early ninth century to the early fifteenth.

At its peak the Khmer Empire extended from today’s Thai-Myanmar border on the west, to Laos in the north and to the central coast of Vietnam on the east. Today surviving remnants of Khmer temples and sculptures are found in all these areas, including Phnomrung in Thailand, Wat Phu in Laos and, of course, Angkor Wat and other temples throughout Cambodia.

The Cham and Khmer were great rivals attacking each other repeatedly over the centuries. In fact, in 1177 the Cham sacked the Khmer capital of Angkor!

The architecture and reliefs that reveal so much about the Angkor period also show that the Khmer, like the Cham, were greatly influenced by Indian art and religions (Hinduism and Buddhism). But Khmer style was constantly evolving over the centuries of Angkor period, from the brick constructions of the 9th century (the Preah Ko style) to the sandstone walls and towers of the 12th century (Angkor Wat and Bayon styles). 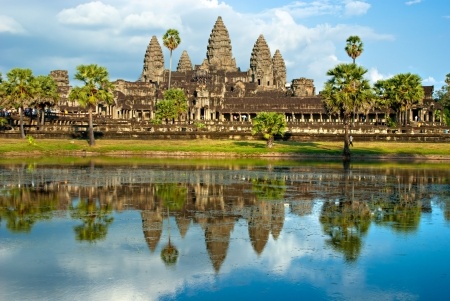 The stars in the crown of the Khmer Empire were the temples scattered along the well-defended plain of Siem Reap, most notably Angkor Wat, the Bayon, Preah Khan, and Ta Prohm.

UNESCO has named Angkor Wat (Khmer for “the City of Temple) a World Heritage Site and considers it one of the largest and most important archaeological sites in the world.

During the Angkor period, the city of Angkor was one of several capital cities the Khmer founded. At its center, surrounded by a moat, which represents the cosmic ocean, is the complex of temples known as Angkor Wat.

Designed to be a physical model of the Hindu and later the Buddhist universe, each of the five towers, or prasats, represent a mountain residence of a deity. In the center is a tower temple representing Mt. Meru, the physical and spiritual center of the universe. Surrounding cloisters and side chapels were homes for the protector deities.

The Khmer were master stonecutters and along the walls of Angkor Wat are carved reliefs of deities, Hindu epics, and historical events of the Khmer Empire.

Ninety percent of Cambodians are Khmer and theirs is the national language. Although most Khmer people are Buddhists, a small percentage is Muslim and Christian.

In the decade since the 40-year war with the Khmer Rouge, the arts are again thriving in Phnom Penh, modern Cambodia’s riverside capital. In the past eight years there have been more than 100 exhibitions of modern Khmer art in the city. So while the focus of most tours is Angkor Wat and other nearby temples, take some time when you’re in the city of Phnom Penh to see the fine art of today’s Khmer artists.

Thinking about trotting the globe?

Explore some of our favorite destinations across Asia and Southeast Asia.