A tour package through southwest Yunnan to Ruili, the border crossing into Myanmar, takes you through what is considered the most exotic part of China. The lush green rice fields provide a verdant contrast to the surrounding mountains. Then, after crossing the border into Myanmar at Muse, you find yourself heading to Yangon on part of the Old Burma Road, built with handmade tools in the late 1930’s.

The Ruili-Muse border crossing is an unusual journey across borders and cultures, and is the only one open to international tourists.

Remarkably in an age of jet travel, electronic communication and repressive regimes, many of the customs and traditions of the disparate ethnic groups persist in these border areas of both China and Myanmar.

Geography plays a major role in preserving these cultures.  For instance, the only way to get to Ruili (pronounced ray-lee), China is by road–planes and trains don’t go there. Then there are the mountains, which for centuries have kept villages of minority groups separated from each other.  Muse, Myanmar, is in Shan State, far from the ruling center of the country, which for centuries governed itself and had it’s own army.

Ruili is where trade happens and Han Chinese and assorted local ethnic groups mingle freely. It’s also a mix of modern Internet centers and an age-old service economy, or, as one journalist put it, “the time-honored currency of female flesh.”

Muse, on the Myanmar side of the border, has it’s own “Trade Camp,” the first one built in the country and is where most of the trade with China occurs.  Muse has its share of cement-block and high-rise apartment buildings, but is years behind the commercialism of Ruili.

Leave either city and you’re soon in landscapes dotted with pagodas and villages with diverse ethnic cultures.  From the Great Jiele Golden Pagoda near Ruili to the Kyaukdawgyi Pagoda at the foot of Mandalay Hill, you meet people who trace their lineages and traditions to ancient India, China and Tibet.

The breathtaking landscape and temperate climate make Yunnan Province a popular holiday spot for the Chinese and those on China Tour packages. But it’s not for relaxing vacationers only: 34 percent of China’s twenty-five ethnic groups call Yunnan home.

Here is a sampling of ethnic groups you will encounter on a Yunnan tour.

The Bai: About 80 percent of the Bai or “white” people in China live in Yunnan Province. Like many ethnic groups in China and Myanmar, they are primarily Buddhists, but they incorporate shamanism or animism or both into their belief systems. The Bai, for instance, worship the god of their particular village and the god of nature.

The Bai value girls as much as boys.  The women are known for their strength, and both men and women work together in the fields.

Throughout Yunnan, you see fine examples of Bai engineering skills and creativity, such as The Three Pagodas in Dali.  Today the Bai are also known for their craftsmanship, especially their lacquer work, so keep an eye out for it when touring villages and markets.

The annual March Fair in Dali is the most important Bai festival. Originally a religious event, today the fair includes sports, music and dancing, and trading goods.

Check out a video of the Bai people in celebration here.

The Naxi Most: Naxi, or “honored” people, live in or near Lijiang, a UNESCO World Heritage site.

Traditionally most Naxi were followers of Dongba Jiao, a form of shamanism in which every living thing, including rocks and mountains, have spirits that never die. 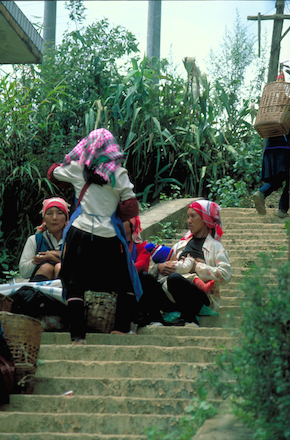 Farmers and stockbreeders famous for breeding the small but powerful Lijiang horses, the Naxi are also talented craftspeople, who specialize in making copper and leather products.

Historically, the Naxi are a matrilineal society: The wife is the head of the family and it’s not unusual for her to work.  When she dies, her property passes on to her children.

One of the liveliest Naxi celebrations is the annual Torch Festival. For three days torches of fire burn outside homes and are carried over hillsides. There are sheep fights and cockfights, horse racing and an abundance of singing and dancing.

The Dai: Sometimes called Tai, this ethnic group developed their own alphabet (as opposed to the Chinese characters or Naxi pictographs), calendar, and books of poetry and legends.

The Dai make their own musical instruments and are famous for their songs and dances, especially the Peacock Dance, one of the most widespread ancient dances in Yunnan. To the Dai, the peacock means everything good–happiness, beauty, honesty and luck–and the dance is important entertainment at the Water-splashing Festival in the New Year.

The patriarchal Dai practice Hinayana Buddhism, but they also believe in some aspects of shamanism. The Dai are famous for their tattoos. In men, the tattoos are a sign of bravery; for women, facial tattoos are symbols of beauty.

The two major ethnic groups you’re likely to meet as you travel from Yunnan to Yangon are the Burman and the Shan, people who historically migrated from different parts of China.

The Burman: About half of the Myanmar population is Burman. They originally migrated from China and have dominated Myanmar’s other ethnic groups since the 9th century, when leaders of the Pagan (Began) Empire attempted to unite the diverse regions of the country.

Most Burmans are Buddhist, but they also revere clever spirits called “Nats” and others called “Nagas,” who live at the bottom of the sea, rivers and oceans.

Young Burman boys are typically sent to a monastery for a few days to a week to practice the life of a monk.  Some never return to their homes but remain and become monks.

The Shan: The largest of Myanmar’s minority ethnic groups along this border route are the Shan. They have lived for more than a thousand years in their own Shan State.

Most Shan people practice Theravada Buddhism, incorporating some of the animist ceremonies into Buddhist holidays. The most important is the Baw-gyo Festival in Hsipaw.  The town’s 12th century Pagoda has four images of the Buddha that are displayed only during this annual festival. It’s also the time the gold leaf on the images is refurbished.  For a week, many Shan make the pilgrimage to view and worship these images.

Today the Shan practice monogamy, and, lacking birth control they often have families of six or more children.

In essence, this trip across the China-Myanmar border is a journey across cultures and along migration routes. This tour package through southwest Yunnan to Yangon is an opportunity to understand how people evolve through time, under different political systems and across distances.