With Myths and Mountains, customizing our Peru itinerary was simple. The chance to go birding in Peru and see condors flying close and free led my husband Fred and me to the southern part of the country, to the Arequipa district and Colca Canyon after we explored Machu Picchu. Set in the Andes where volcanoes rise 20,000 feet, the region features a dramatic landscape with a gorge twice as deep as the Grand Canyon.

Thermal columns of air rising from the depths attract the condors. They especially like a specific rock perch about an hour’s drive from the nearest mountain village. In turn, each morning the birds attract busloads of tourists who arrive hoping for action.

“I e-mailed the condors,” our guide Mauricio Gamboa Rondon told us with a grin, adding, “But you never know with them….”

Nicknamed “Condor Man,” Mauricio said condors have only skunked him twice during his ten-year career as a guide.

“But you never know with them,” he repeated.

Still, experience and instinct told Mauricio that we didn’t need to rush to the site that November morning because spring temperatures were required to create the thermals Condors prefer.

Hoards of people arrived before us at the popular bird-watching site, perching on rocks and leaning on walls and fences.

Mauricio instantly honed in on two condors gliding in the air thousands of feet below us, unnoticed by most of the early risers. Condor spotting is much like whale watching, requiring good eyes and patience. Another important skill comes from observing the people around you.

Sure enough, we heard a group on top of a nearby mound of rocks titter about a half hour later. Some leaned their bodies precariously over the ledge.

Fred and Mauricio stayed in place while I moved slightly further away to a curve in the rock. From there I saw the birds’ favorite perch with ease.

A large brown Condor sat on it, casually scratching her long beak with an intimidating talon. She looked to her left, oblivious to the excitement she inspired. She scratched again and looked right. She stared directly into my camera lens.

Faster than the flick of a light switch, she took off without the usual bird warning (a big dump) to let me change into proper camera mode. Still, my blurry shots capture the speed, motion and size that made condors so inspiring to the region’s ancient civilizations.

“I feel they are the soul of the people, no matter what you look like outside,” Mauricio told us.

As if the curtain on a Broadway show went down, the condor’s audience rose, filled tour vans and cars, and were carried away. The area regained its quiet peace.

Lacking the dramatic orange and reds of the Grand Canyon, Colca’s splendor comes from its towering height and the promise that despite all of humanity’s efforts to conquer, nature rules.

The region’s impressive altitude brings another wildlife-viewing opportunity. Two hours from Colca Canyon on the road to Arequipa and beneath the 16,000-foot summit of Mirador de los Volcanosare, rock piles lay on either side of the road. These are home to the viscacha.

Viscacha spotting lacks the same caché as condor viewing, so no other vehicles pulled to the side of the road for the chance to see these rabbit-like creatures.

We squinted into the rocks as Mauricio described the viscacha as a combination of rabbit, pica, Marmot, and raccoon. They are rodents and are closely related to chinchillas. 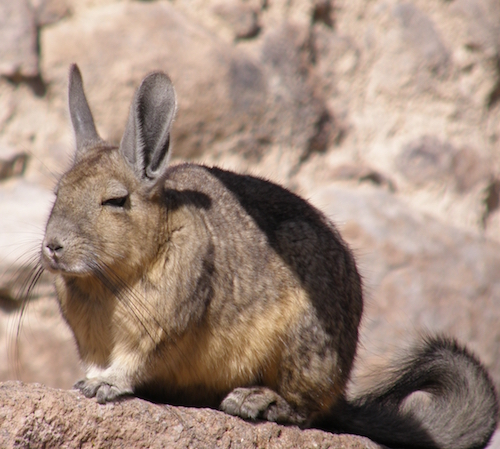 “There’s one!” he pointed as a flash of movement whizzed behind a rock.

We kept scanning the rocks until we saw them. Starting out a pale whitish, their color crisped to a reddish brown. Viscachas have short, bunny-shaped ears and a dog-like tail that is banded by black and white stripes. Cute.

Enthralled, Fred insisted we stop again on our way out of the region. He seemed caught up in a real-life video game, trying to mark the spot where a viscacha would emerge and a chance for “just one more” sighting.

The viscachas, meanwhile, played their competition. They reminded me of a Lumosity brain game called “Eagle Eye,” where you’re supposed to mark the place where a bird just appeared in a flash that is barely discernible to the aging eye.

Popping out from a rock, the viscacha was gone in an instant. He moved so fast we didn’t see him flipping us the bird and giggling “Gotcha!”

You can read more about Robin and Fred’s Peruvian adventures with us here.