Some call the 621-mile, overland journey from Lhasa to Kathmandu “epic,” “the experience of a lifetime,” and “wondrous.” We call it the ultimate road trip, a Himalayan High that ends with an altitude drop of over 12,000 feet from the Tibetan Plateau to the Kathmandu Valley.

Although the journey can be done in two to three days, chances are most travelers won’t come this way again, so we at Myths and Mountains suggest taking at least eight days to allow time for a stop or overnight at North Everest Base Camp, visits to monasteries and cultural monuments, and altitude adjustments. Take time to wander the towns and temples, speak to villagers, and quietly contemplate the vast landscape of the highest mountains in the world. 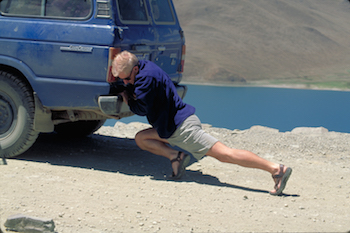 Of the five major roads that connect Lhasa to other areas of the Tibet Autonomous Region, the Friendship Highway (China National Highway 318) opened in 1967 primarily to serve the military. It’s believed to be the easiest, but that’s not to say it is easy!

For the Friendship Highway, you still need nerves of steel, but the road is fairly widely traveled and often better maintained than the other roadways. Today the segment from Lhasa to Kathmandu is considered one of the most spectacular roads in the world, but in no way is it for the faint of heart.

With a good, four-wheel drive vehicle and an experienced driver, the Friendship Highway is fairly safe, and switchbacks with only a railing between the road and a 10,000-foot drop, keep cars and trucks from going as fast as on an American interstate. The highway is mostly paved, and the segments that are gravel and sand are well maintained. Nevertheless, one never knows what one will encounter.

The Friendship Highway extends from Shanghai on the coast to Zhangmu on the China-Nepal Border, but the dramatic part begins in Lhasa.

Views from the Roof of the World

It’s best to begin the journey after a few days of acclimatization in the 1300-year-old city of Lhasa (11,975 feet). While the body adjusts to the altitude for a few days, the traveler can join the pilgrims walking the Barkor around the Jokhang Temple, wander through the Potala Palace, visit Sera Monastery and enjoy other sites. 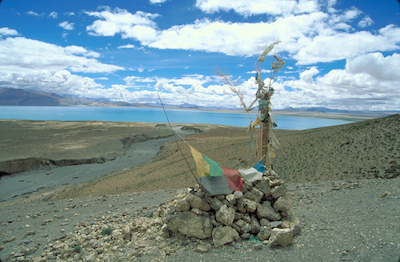 Leaving Lhasa, you are surrounded by mountains as the road snakes along the rushing Kyi Chu River. Soon the winding road through the valley ramps up from lovely to spectacular, as you look down on turquoise Yamdrok Tso, one of the four holy lakes of Tibet and home to what Tibetans deem the “wrathful deities.”

Here you’ll soon encounter one of the journey’s seven heart-stopping passes that take you from high dessert to what really does seem like the roof of the world. None of the passes is less than two miles high. Among the highest are Kamba La (15,420 feet) and the Karo La (16,522 feet), from which you can look down to the brilliant white Karo La Glacier.

The Long and Winding Road

The highway dips and curves, climbs and descends for 162 miles from Lhasa to Gyantse (13,210 feet), which one traveler described as looking like a frontier town. In fact, it’s an agricultural town, encircled by lush orchards and fertile plains of wheat and barley and home to the famous Khumbum Monastery.

The road then goes up to Babar (14,175 feet) and then still higher to Pang La (17,062 feet) with it’s sweeping views of the Himalayan Range. In the distance is the highest mountain on earth, Mt Everest (29,029 feet)–aka Chomolungma or “goddess mother of the world” to Tibetans and Sagarmatha or “Goddess of the sky” to Nepalis. In the distance, too, is the fourth highest mountain, Lhotse (27,890 feet) and the fifth highest, Makalu (27,765 feet). Peak after peak after peak–the magnificent view is unlike any on the planet. 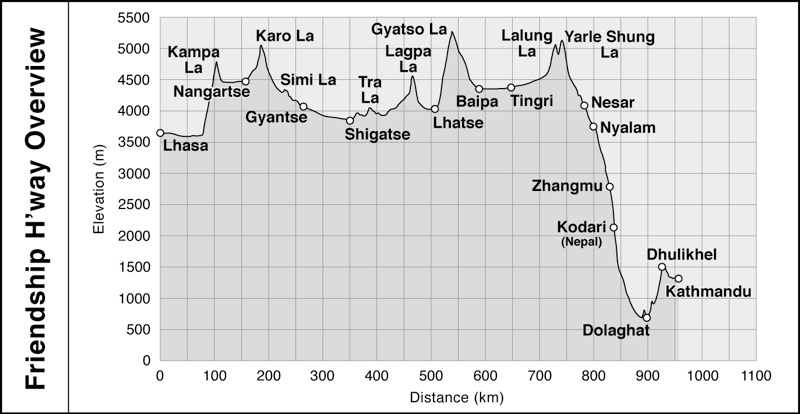 Back on earth, the asphalt highway rolls through the valley to Shigatse, the former capital of the Tsang region and Tibet’s second largest city. Here nestled beneath the treeless, grey-green mountains is the 15th century, red, white and black Tashihunpo Monastery (the “Heap of Glory”), the largest functioning monastery in Tibet.

For many travelers, the next stop along the way to Kathmandu is North Mt. Everest Base Camp, literally the high point of the Friendship Highway. From the Ronbuk monastery (16,404 feet), the highest monastery in the world, the Base Camp (17,060 feet) is a 4 ½ mile trek or bus ride along a dirt road off the highway. 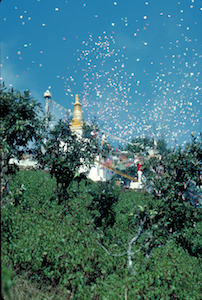 There are still several passes to cross, such as the Tong La Pass (16,828 feet), but then the highway quickly drops some 9,000 feet to the small Tibetan town of Nyalam (12,300 feet) that is about 20 miles from the Nepal border. As the very winding road descends, the topography changes and the rocky Tibetan plateau gives way to evergreen forests.

After crossing the border, the Friendship Highway meets Nepal’s Arniko Highway. For the next 70 miles, you’ll pass through the ruggedly beautiful, green hills of Nepal. By this time, your eyes will welcome the verdant valleys in front of you, while behind, seen through an otherworldly blue haze, is the distant white ridge of the Himalayas.

Most amazing, perhaps, is that you have taken about six days to get to North Everest Base Camp (17,060 feet) from Lhasa, and you have plummeted down in a day or so about 12,460 feet to Kathmandu! The journey may be over, but the memories of the Himalayan vistas will remain in your mind’s eye for a lifetime.