Angkor Wat is just one of 72 Angkor must-see landmarks in Siem Reap. 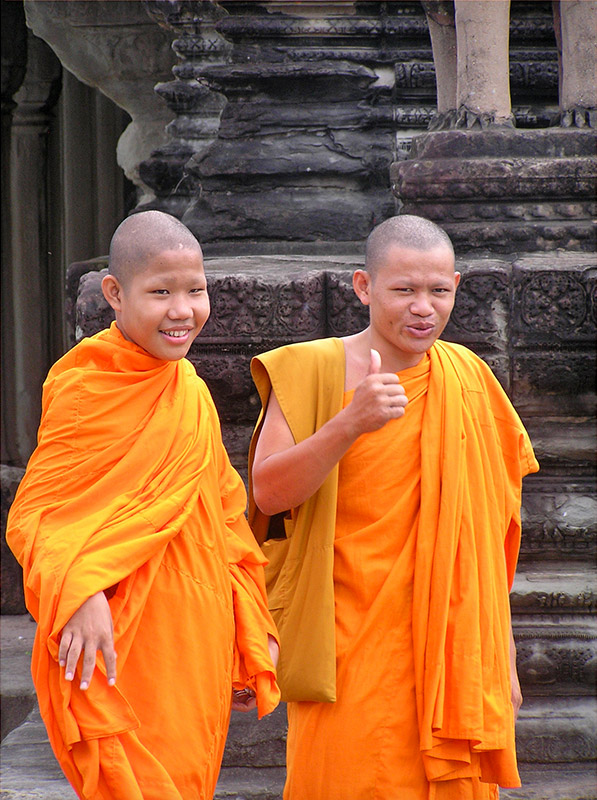 If you think you can cross Angkor off your bucket list in a one-day visit, you don’t know the difference between a temple and a city. And you’re not alone. Many people don’t know that Angkor Wat, the world’s largest temple, located near the gateway city of Siem Reap, is just one of 72 landmark sites scattered across Cambodia’s 154-square-mile Angkor Archeological Park.

Two million travelers a year visit Siem Reap, gateway to the Angkor Archeological Park. Why is it so popular? There are several reasons.

One, Angkor’s a UNESCO World Heritage Site and has the added distinction of being a “living” heritage site, which means there are Cambodian people living there and maintaining their ancestral traditions. And two, Angkor Wat is the largest religious monument in the world.

But to fully answer the question, “Why Angkor?” you have to go back to it’s founding in the 9th century.

Angkor and the Khmer Empire

Angkor, which is Sanskrit for “capital” or “holy” city, was the capital of the Khmer Empire, an enormous Hindu-Buddhist empire that extended from the coast of Vietnam to Bagan, Myanmar and included much of Thailand. By the 12th century, about a million people lived in Angkor, making it the world’s largest pre-industrial city.

The city had a hospital and a university of medicine (medicinal plants are still grown in Angkor). There were opulent shrines, terraces, towers, miles of decorated walls, and about a thousand temples. Crucial to the city’s survival was the intricate and unique hydraulic irrigation system that brought water to the people, their farmland and rice fields.

Although the jungle has intruded upon many of the landmarks, Angkor was never a truly “lost city.” In the 1500’s Portuguese and Spanish occupied it, adding some decorations of their own, and at least one Cambodian ruler attempted to restore Angkor Wat, rebuilding parts of it.

However, as trade with China and other countries became more important, capital cities of agrarian communities like Angkor gave way to newer commercial settlements on the coast. Eventually the city and its rice fields were slowly abandoned and nearly swallowed up by the jungle. Some historians also believe that invading Thai armies sacked Angkor.

In the 1860’s, when what is now Cambodia became a French colonial territory, Westerners “rediscovered” Angkor, and the exploration and restoration effort began.

Without Tonle Sap Lake, There Would Be No Angkor

Some travelers make the journey to Angkor and Siem Reap and never see the natural wonder that gave birth to Angkor–the Tonle Sap Lake, the largest freshwater lake in Southeast Asia.

The Tonle Sap River, a tributary of the Mekong River, floods the Tonle Sap Lake in summer making it as much as five times larger than usual. The Khmer people, utilizing engineering genius and ingenuity, created a complex and unique hydraulic system of reservoirs, water wheels and canals to make use of the dramatic ebb and flow of water with the seasons. The Khmer’s water management skills brought great wealth to the people, especially the royal families of the god-kings.

Saving the Best For Last

How long you stay in Siem Reap depends on your interests. Scholars stay there for months studying the lovely carved apsaras, or nymphs, that appear to be dancing along the ancient stonewalls of Angkor Wat and translating the reliefs depicting Hindu mythology and Buddhist texts.

We can arrange a tour of Cambodia that fits your personal time frame, but we recommend spending no less than three days of your trip in Siem Reap, home to the hotels, restaurants and park entry.

For many, looking at the temples from a historic perspective is most interesting. Since various rulers built these structures, each offers a unique insight into the art and architecture of the different Khmer empire eras.

When possible, we like to end the tour with a visit of the largest temple and bucket-list favorite–Angkor Wat. We agree with the experts: Angkor Wat is truly the masterpiece of the Khmer culture.

A “Temple Safari” is especially fascinating. You camp near a temple such as Kol Ker and see it at sunrise, before many tourists come, and at sunset when they are gone.

Here is a brief cheat sheet of six must-see landmarks you can see in three days. (We list them here in the general order in which they were built.) 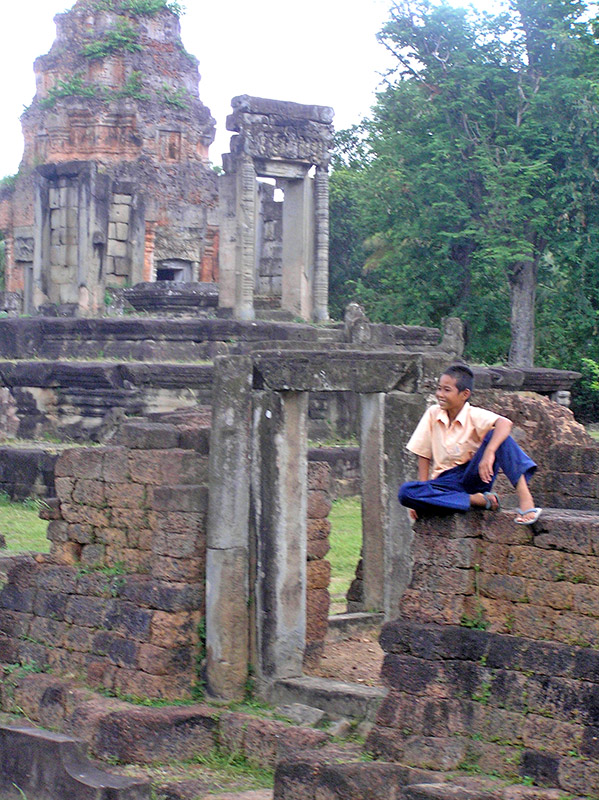 Travel back to one of the earliest capitals of the Khmer Empire, Hariharilaya, or Roluos, a village not far from Siem Reap. You can begin touring this group of pre-Angkor temples with a visit to the brick Lolei temple. It was originally set on an island in the center of the Indratataka baray (reservoir), the first man-made lake in Cambodia. From there, continue to Preah Ko (Sacred Bull), named in honor of the god Shiva’s mount, Nandi. Originally coated in stucco and painted, some of the ancient plaster is still visible on the rear towers. End with Prasat Bakong, the first of the temple mountains that would become the architectural signature of Khmer kings. Giant stone elephants guard the lower levels of this enormous pyramid and mark the cardinal points. 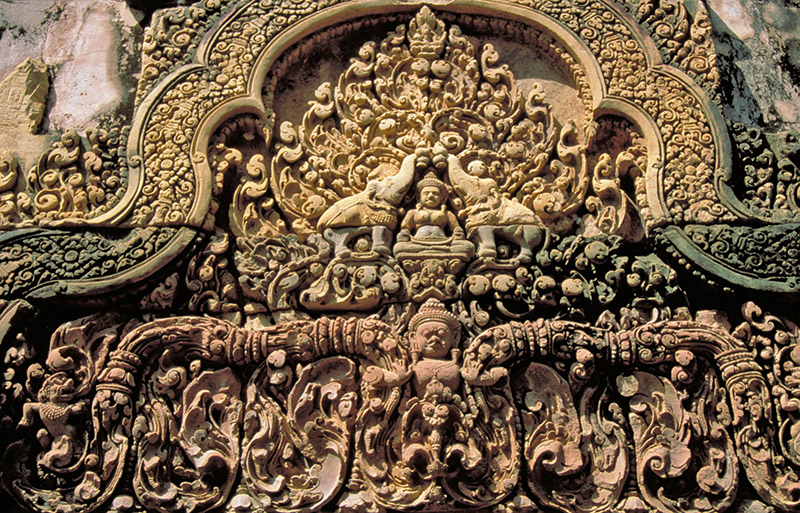 Though much smaller than the Angkor temples, some experts consider Banteay Srei the high point of Angkor art. Instead of military processions, intricately carved Hindu deities and myths, vines and flours, mythical beasts, and scrolls cover every square inch of this rosy-pink sandstone sanctuary. Although the temple is dedicated to the Hindu god, Shiva, you may hear the sanctuary of Banteay Srei referred to as the “Citadel of Women,” because of the voluptuous dancing girls along its walls. (Souvenir copies of these goddesses in all sizes are sold in Siem Reap shops.) 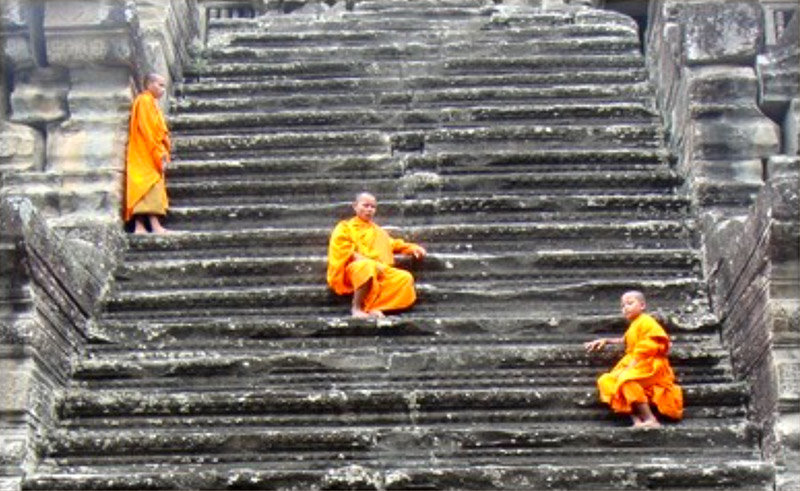 Many of the enormous blocks of sandstone used to build this three-story temple and its five towers still stand. A thousand years ago, the terraces, stairways, and sanctuaries of this first “temple mountain” marked a new era of Khmer architecture. 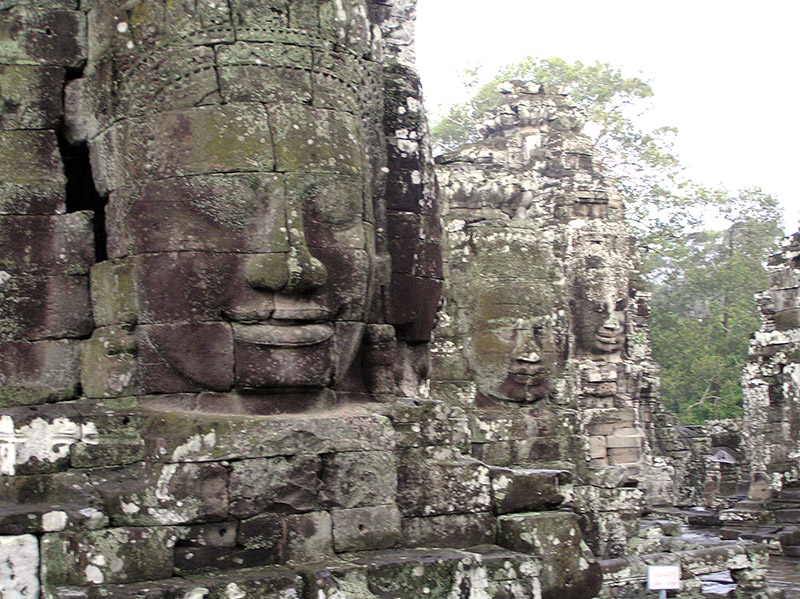 This “new” city, built beyond the walls of Angkor Wat, is a fortress.  On your first step onto its causeway entrance, the 108 giant, somber statues of mythological figures spark your imagination. It’s said that this “rainbow bridge” is meant to link the human world at one end of the causeway to the world of gods within the temple.

The main entry towers or gopura are decorated with enormous enigmatic faces, each one pointed in a cardinal direction. (It’s said that the faces resemble the king who built Angkor Thom.) Inside more towers–and more faces–reach for the sky.

In the center is the Bayon temple that set in stone the “Bayon style” of architecture.

This complex was built over an older complex, and incorporated some of those earlier temples into its own construction. Some experts believe that that the Elephant Terrace from which the king viewed celebrations was also part of the earlier structure. More deities and divinities than you can count decorate the Royal Terrace. Some say this is the site of the royal crematorium and others say that the crematorium was at the Terrace of the Leper King. 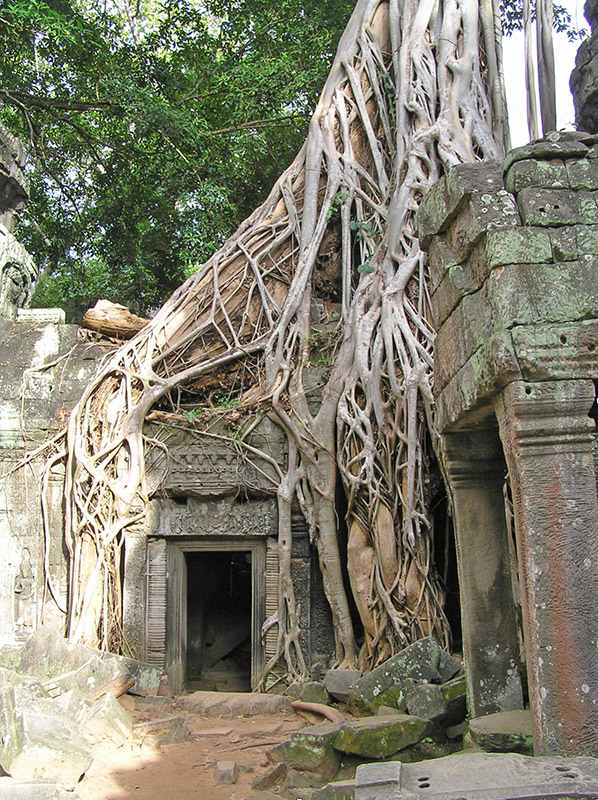 Tell the tuk-tuk driver in Siem Reap to take you to the “Tomb Raider Temple,” and in about 20 minutes you’ll be delivered to the entrance of the Ta Prohm Temple, made famous by Angelina Jolie in the movie Tomb Raider.

Ta Prohm is a royal city and a religious and commercial center, covering about 150 acres. The Ta Prohm Temple lies at it’s heart.

Today, the many stones of the temple lay about like a baby giant’s scattered toys. The few remaining doorways and ceiling-less rooms appear to be partially consumed by giant roots of silk cotton trees covered with tentacles of strangling fig trees.

Other than careful manicuring from time to time, this is one temple that is not slated for reconstruction. Tourists are fascinated by its mysterious aura and feel as if they are encountering a “lost” city.  Few can resist taking a “selfie” in a dark temple doorway being captured by enormous tree roots. 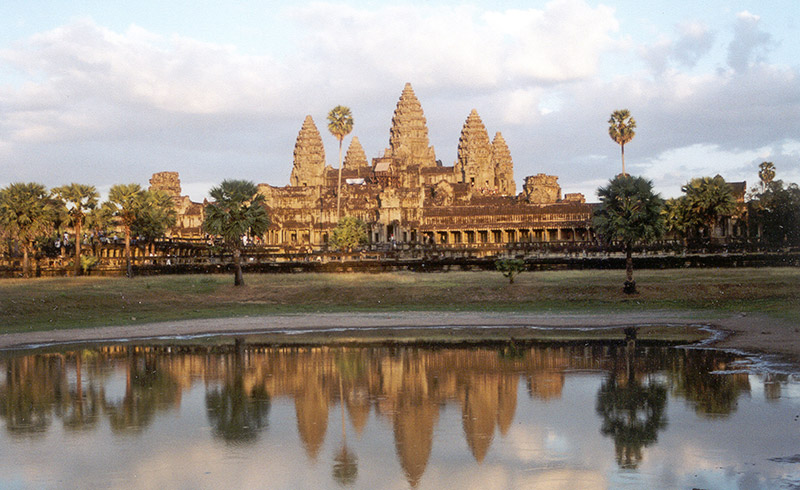 The square, symmetrical layout of the temple is typical of Khmer architecture.

It is so vast that along with the open spaces and covered walkways, there is room for a man-made mountain and a royal palace.

It’s designed to mimic the Hindu universe in miniature, including five towers that represent the five peaks of Mount Meru, the home of the gods.

Over two centuries, sculpted wall reliefs became a Khmer specialty, and they are everywhere you turn in Angkor Wat. Like a Khmer version of a graphic novel, a half-mile long wall may depict a scene from a Hindu epic, document a real-life historical procession, and even convey scenes of the Khmer idea of heaven and hell.