There is far more to India than the Taj Mahal, Rajasthan and Varanasi – the Classic India tour.  Of course, those places are most travelled, but wherever you go in the largest democracy in the world, you’ll encounter a dazzling kaleidoscope of people and activity. To say that India is diverse is an understatement: It’s home to more than 2,000 ethnic groups and all the world’s religions!

India is also one of the world’s most colorful countries. What tourists often don’t know is that some of the richest Indian treasures are in out-of-the-way places like Northeast India, Gujarat, Sikkim and Darjeeling. They simply haven’t been discovered yet by the 200,000 visitors who gawk at the Taj Mahal each year.

All you need to make any of the following trips your own treasured memory is curiosity and a sense of adventure. A knowledgeable guide will be sure you don’t miss a thing. 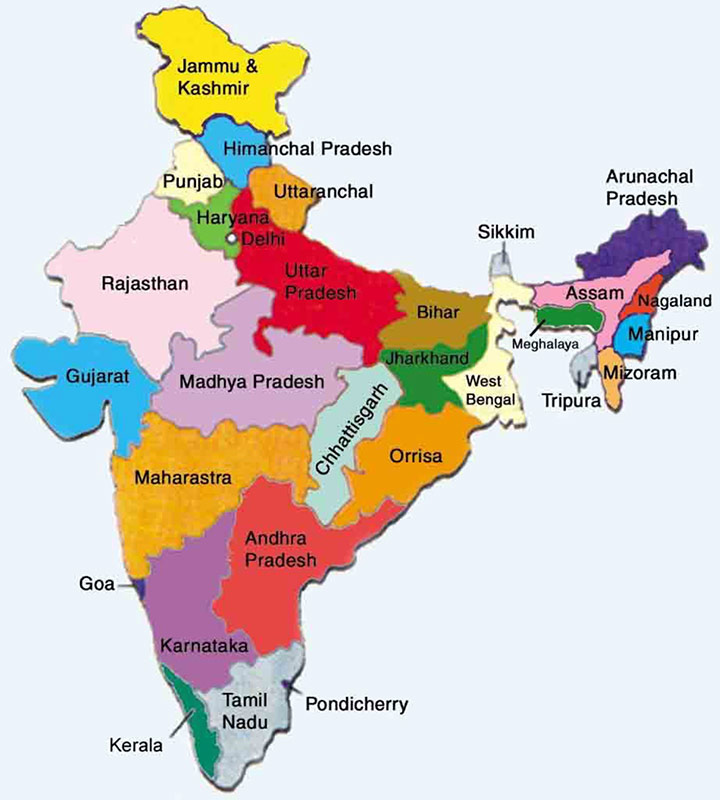 Take a look at a map of India and imagine it’s shaped like the head of a rabbit facing you.

The tall right ear, jutting eastward and attached to the India subcontinent by only a 12-mile-long finger of land, is Northeast India. Its 160 square miles and seven states border four different countries: Bangladesh, Bhutan, China, and Myanmar.

Before there were borders separating India from Southeast Asia, tribal people moved back and forth over many of the same areas. Over the centuries, despite politics and wars establishing separate nations, many of the tribes in India survived more or less intact. That diversity is one reason why visitors find this area so fascinating.

There’s a Western epic here, too. You may have earned an A+ in high school history, but did you know that Northeast India is where Indian and British fighters stopped the invading Japanese in World War II. The five-month-long Battles of Kohima and Imphal (the capital of Manipur) have been cited among the great campaigns of history, and a turning point in Japan’s Burma campaign.

Why travel to Northeast India. This region is filled with a mixed bag of people from varying cultures and backgrounds, villages and small market towns, game drives and even the oldest golf course in Asia. Here a sampling of high points:

• Tribal people. The villages and towns of the Metei, Naga, Khasi and other tribes each have their own personalities and architecture. Travelers can watch indigenous craftspeople at work, visit homes, sample native dishes, attend colorful festivals and just spend time getting to know the locals.

Despite the influence of the west, many ethnic groups have maintained their unique rites and traditions. Most well-known is the Naga Hornbill festival, but one of our favorites is the less-touristed Naga people’s Sekrenyi Festival. Here the sins and misdemeanors of the past year are washed away. You could call it the Naga version of an annual fresh start. 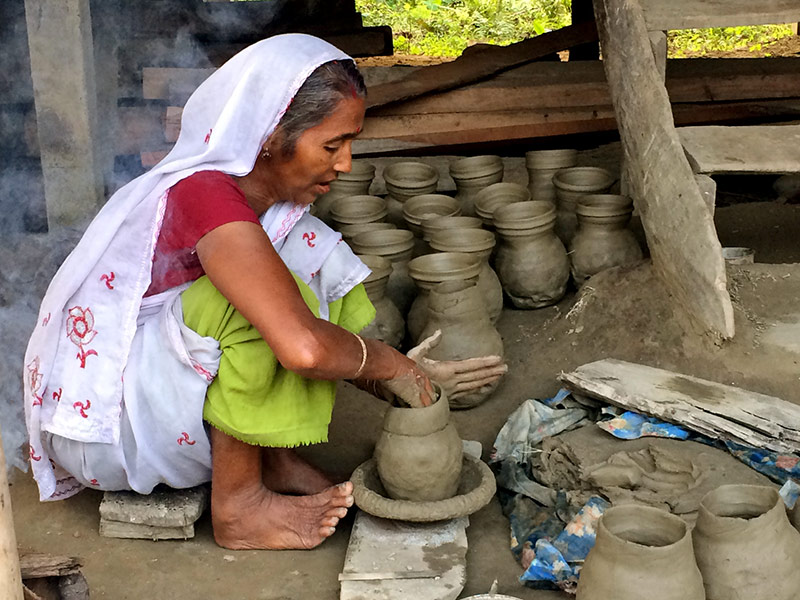 • Majuli Island. Its 136 square-miles make it the largest river island in the world. Dozens of agricultural settlements call this island in the middle of the Brahmaputra River home. Their main crop is rice, so the vibrant green rice paddies stand out in sharp contrast to the sandy shores. There are 22 ancient Hindu monasteries scattered across the island, and you can visit unusual retreats, watch the religious dances and talk with the monks.

The island is also known for its crafts. Some of India’s finest artists fashion ritual masks from clay, bamboo, and cloth. Pottery is another island specialty, and much is still made by beating the clay into shape rather than on a wheel. Hand-loomed cotton and silk weaving is another centuries-old craft that flourishes on Majuli. 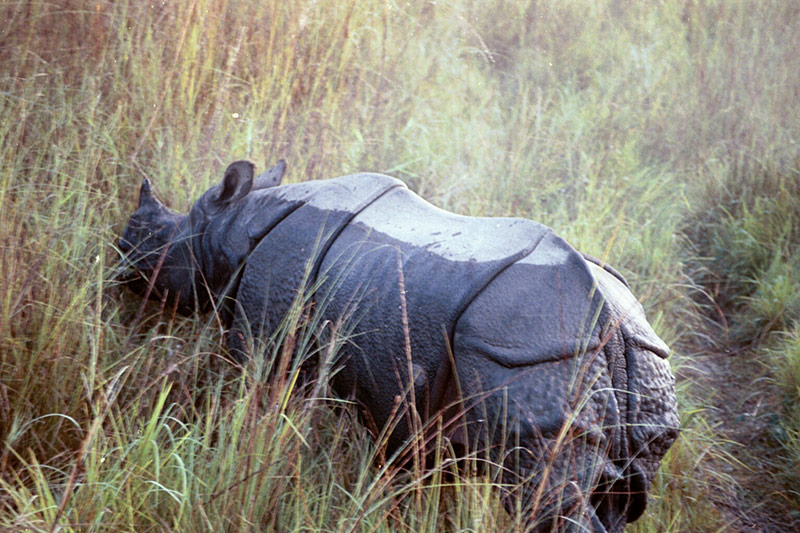 • Kaziranga National Park. The diversity of wildlife in this park is as remarkable as the diversity of India’s people. Interestingly, the park is home to 75 percent of the world’s one-horned rhinos, and has evolved into a haven for these lumbering creatures. Just a few decades ago, this “Indian” rhino was almost extinct. Now, as a result of rigorous conservation efforts, you can see the healthy rhino population from a jeep.

On the west coast of India just below Pakistan, is one of the oldest and fastest growing states of the subcontinent. It’s a land of contrasts, ranging from the bustling city of Ahmedabad, founded in 1411, to the lovely and quiet Portuguese coastal village of Diu, to the vast expanse of the Great and Little Ranns of Khaachh, that is underwater six months of the year! 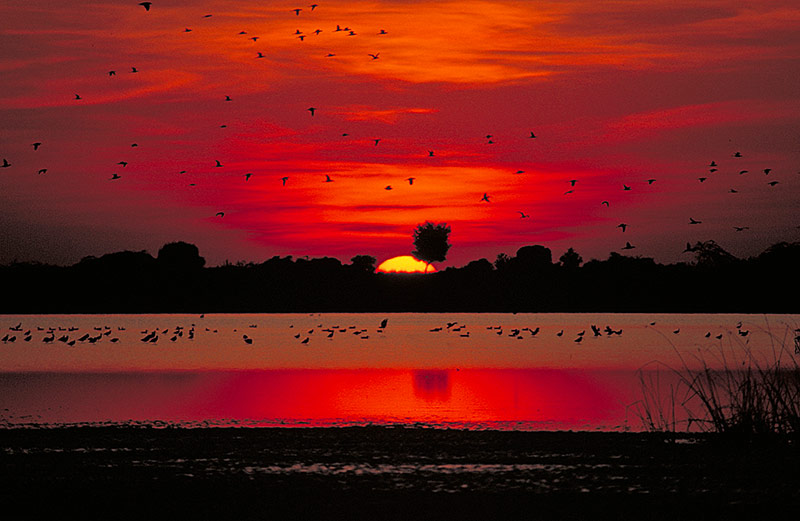 Even the camels are different here – they can swim! Gujarat is also the birthplace of Mahatma Gandhi, and where he started his famous “Salt March to the Sea.”

There are so many “out-of-the-ordinary” aspects of Gujarat, that you can have a new surprise every day; yet it is free of tourists. Most visitors to India go to Rajasthan, so I like to say, “Gujarat is where Rajasthan started!”

Need a reason to tour Gujarat? Here are three of the best we’ve heard:

• You’re fascinated by archeology. Gujarat triggers some serious time travel. The pre-Mohenjo-daro/Harappan ruins of Dholavira, one of the grandest cities of Indus Valley civilization, will take you on a journey to about 2650 BCE. You can also visit the ancient city of Lothal, once a major port and trading city that dates back about 4000 years.

Bet Dwarka a small island off the coast of Gujarat is said to be where the God Krishna ruled as King and the location of some major events his life. 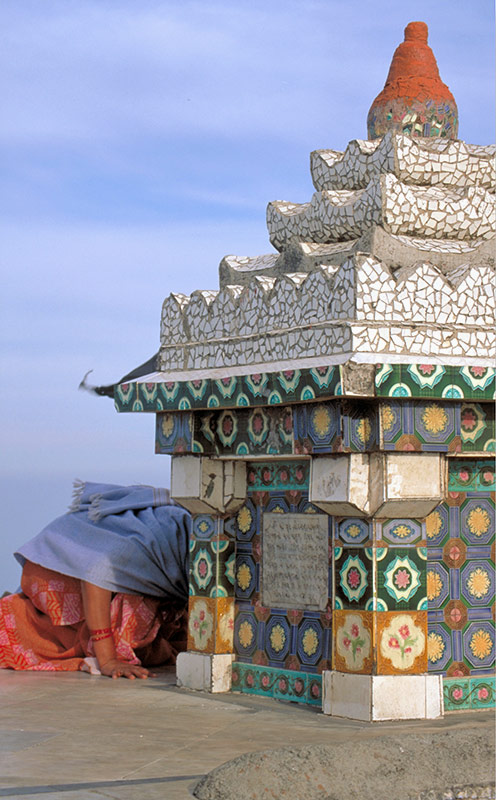 Religious sites, including important Hindu and Jain pilgrimage locations, are scattered throughout Gujarat. If you’re up for testing your fitness level, climb 10,000 steps to top of Girnar, holy to the Hindus and near the ancient city of Junagadh. Less athletic visitors hire porters to take them to the top in a chair-like dholi. Don’t be embarrassed but be prepared to be weighed first!

You can also clamber up the less difficult Jain pilgrimage site of Palitana, a wonderful opportunity to laugh and joke with the locals, share climbing stories and get to know the Jain deities.

Also notable are the 11th century Sun Temple in Modhera; 15th century mausoleums, mosques and forts throughout the state and the Gandhi Ashram in Ahmedabad.

• Animals are your thing. The four national parks of Gujarat are burgeoning with wildlife and even marine life. Plus, there are two dozen animal sanctuaries, some of which are also home to tribal people. More than 200 species of birds thrive here along with the wild ass and the once nearly extinct Asiatic lion. And you thought only Africa had safaris! 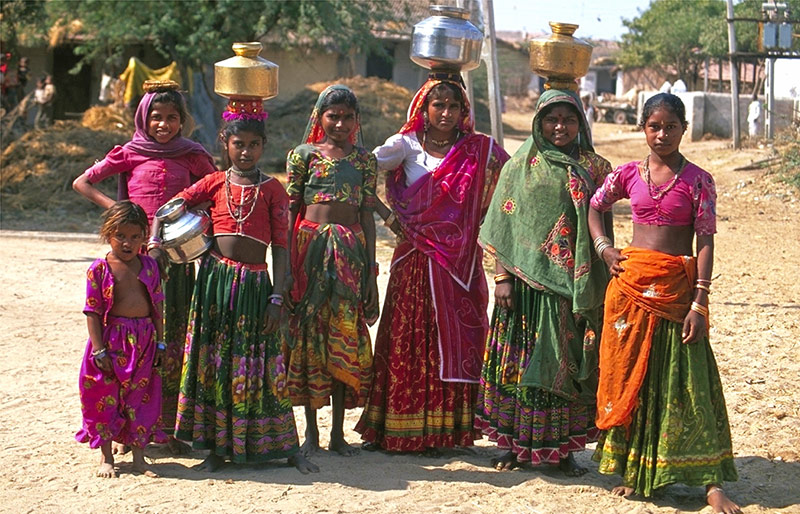 Gujarat is a craft collector’s paradise. The textiles are so unique and beautiful, that Gujarat has been referred to as “the Manchester of the East.” Some of the techniques used today date to the 4th century and are impossible to recreate with machines. An absolute must is a visit to the Calico Textile Museum in Ahmedabad, not to mention time in the Kala Raksha workshops near Bhuj.

You’ll find silver and brass work, carving, beadwork, carpets and pottery. Almost every region of Gujarat has its particular specialty. You can shop for a tangalia (a kind of sarong) in one district, handmade silk ikat fabric in another, and intricate jewelry in another.

Walking the Himalayas: Sikkim and Darjeeling

Centuries ago, the indigenous Lepchas called the lower Himalayas “paradise.”

Certainly the landscape is one of the most beautiful in the world, with wild flower-filled meadows, thick forests of rhododendron and pine, rivers, glaciers, hot springs, waterfalls and mountain peaks, as well as India’s highest mountain–Kangchenjunga.

Today this state is called Sikkim, but it’s often referred to as “the last Shangri-La,” meaning forbidden place. It may have seemed that way until the last ruling Choygyl, married the American socialite, Hope Cooke.

India and China have fought battles along their borders, and Indians feared that China would steal Sikkim from them. To protect the borders and preserve Sikkim as part of India, the monarchy and status of Sikkim as an Indian protectorate were abolished in 1975, and the kingdom became an Indian State.

The area is a joy for both trekkers and those who prefer to tour.

A Trekkers’ Paradise. That’s what trekkers call this northeast India state, and we agree. There is much to love about trekking in this part of the world:

• It’s a place to let your feet and imagination run free. If the talks and exhibits at the Mountaineering Institute in Darjeeling, don’t light a fire under your feet, the sunset walk to Sandakphu will.

On a clear day you can see several of the highest peaks in the Himalayas from Sandakphu and other places along the path. And if you miss sunset, there’s always sunrise! A local proverb avers, “If one does not wake up to see the sunrise at Sandakphu, the visit will remain incomplete.” 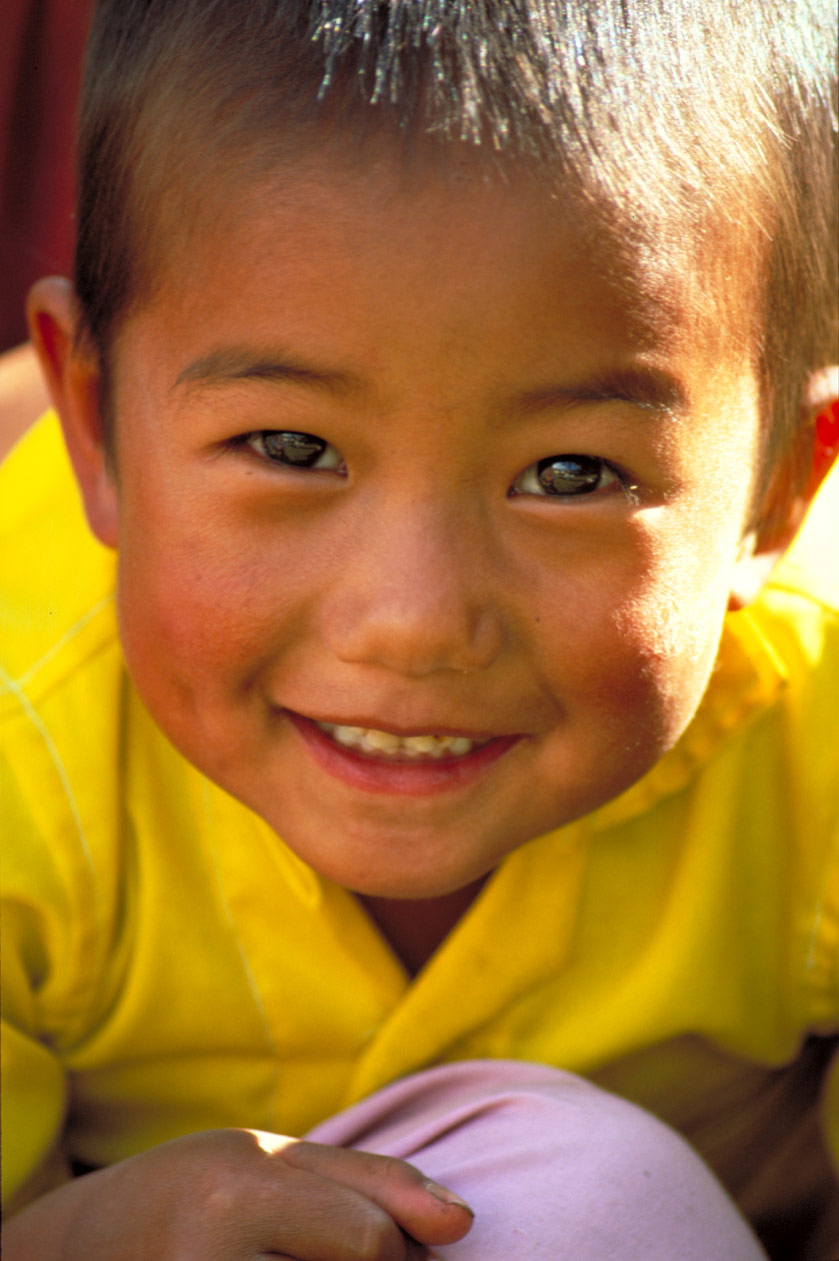 It’s home to a cross-section of people and religions. Sikkim shares borders with Bhutan, Nepal, and Tibet, and its people include indigenous tribes, such as the Lepchas, and other people who are descended from the population of all three countries, such as the Bhotias from Tibet.

Gompas galore, ashrams, and even mosques decorate the country. By one estimate, there are about 200 monasteries in Sikkim, representing the different Buddhist schools. There is even a music school founded by a Jesuit priest.

• It’s a safe haven for wildlife. There are many parks and wildlife sanctuaries throughout Sikkim, where blue sheep, red pandas, Himalayan bears, Himalayan tahr and the rare snow leopard are protected.

• It is not over-touristed. Nepal, Bhutan, Ladakh and Tibet are all rife with tourists and trekkers, but somehow Sikkim has escaped the crowds. It is not overloaded with teashops, trails are for meditation, and charming villages are still untouched by the 21st century rush. 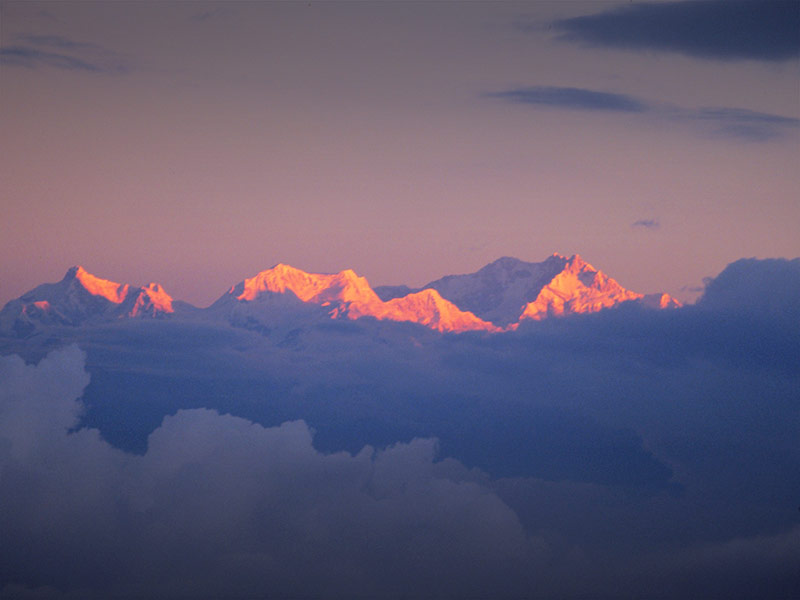 On the way to Sikkim, it is rewarding to schedule a day or two in the tea town of Darjeeling (6700 feet) in the Himalayan foothills. Long ago, officers of the British Raj came to this area to escape the heat of the plains, turning it into a popular health resort. Today, it remains a favorite summer retreat for Bengalis.

Darjeeling has a great Mountaineering Museum, tea plantations, a wildlife park (home to India’s only Siberian tigers), a Tibetan Refugee Center, and Yiga Choling Gompa, the famous Yellow hat Buddhist monastery. The town is a fascinating gateway to the more remote natural wonders of Sikkim and, for those who wish to go farther, not too distant from the border crossing at Phuntsoling, into Bhutan.