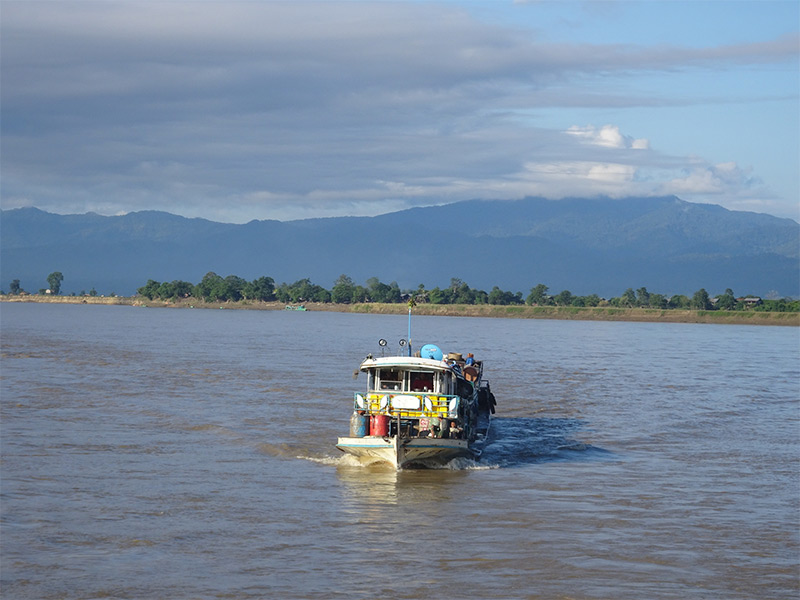 Myanmar’s rivers – the Ayerwaddy, the Salween, the Kaladan, the Sitaung and others – are interstate highways in Myanmar.  The Chindwin is no exception.  Myths and Mountains President, Dr. Antonia Neubauer just returned from an exploratory trip up the Chindwin between the towns of Monywa and Homalin, an ideal trip for the traveler who wants to get off the beaten track and yet spend the night in elegant comfort.

Bordering on Northeast India and the largest tributary of the Ayerwaddy, the Chindwin rises in Kachin State and flows 750 miles generally south through Myanmar passing through forests and mountain ranges, as well as a 2,500 square mile sanctuary for the tiger in the Hukawng Valley. Along the Chindwin flourish fabulous teak forests, and locals discover amber, jade and even gold in drainage areas and surrounding mountain ranges.

Despite the punishing mountainous jungle terrain to the west, the Chindwin has seen several invasions crossing back and forth over its waters, including an incursion in 1758 by King Alaungpaya of Burma to occupy the states of Manipur and Assam in India. The river was the graveyard for many of the boats from the famous Irawaddy Flotilla Company that were sunk during WW 2 to keep them from the Japanese.  Field Marshall Viscount Slim and the British Army fled across the river to escape the Japanese onslaught and regroup their forces. Then, 1945, they re-crossed the Chindwin again to drive the Japanese from the country. 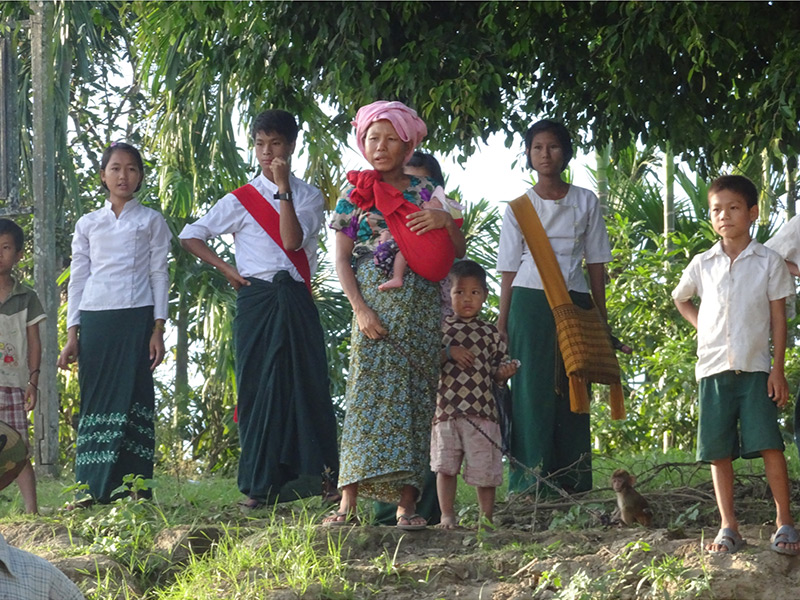 re still few real roads that are passable in the area, to take an adventure cruise up the Chindwin on a small boat from Monywa to Homalin, such as the one offered by Myths and Mountains on the RV Zawgyi Pandaw is a real insight into rural, untouristed Myanmar life. A trip such as this is ideal for the traveler who wants to truly get off the beaten track, and yet have a gourmet meal and a comfortable bed at night.

Although one can take local commuter boats on the Chindwin, the only luxury tour boat traveling between Monywa and Homalin is the RV Zawgyi Pandaw, and these cruises only began very recently in 2016. The RV Zawgyi was refurbished in 2015 and has only 10 staterooms. As Pandaw’s smallest riverboat, it has the shallowest draught, enabling it to negotiate the shallow waters in the Chindwin River. 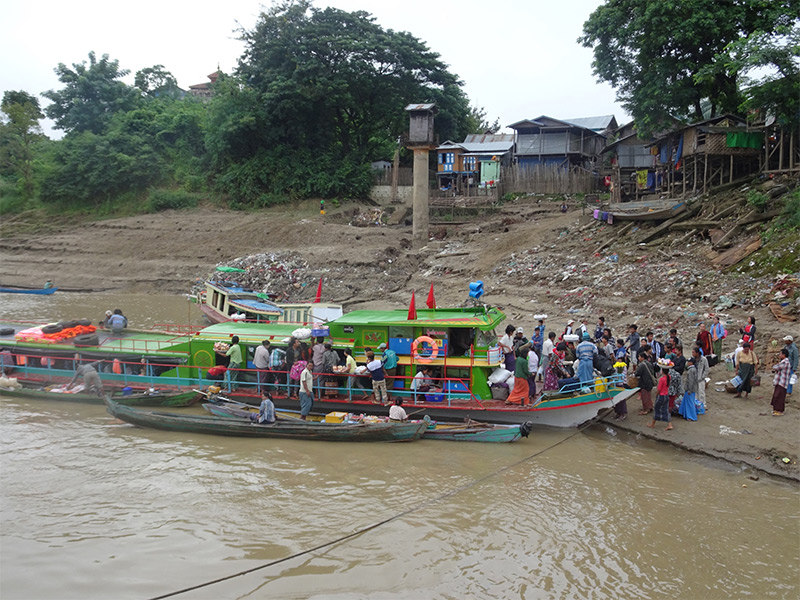 Small villages and towns line the banks of the river, and pagodas dot the countryside. Although some of the towns and villages in the area, such as Homalin or Mawlaik, have seen a few western tourists passing through on the local commuter boats or the few trips the RV Zawgyi has made to date along the river, there are still many that have not been visited by tourists at all. Thus, the arrival of the Zawgyi generates much excitement when it docks, smiles are ubiquitous, and everyone says “hello,” or “Mingalaba.”

Every morning bright and early, the river bank comes alive. Local commuter boats pull up to the shore to take women, men, children or monks up or downriver with goods for market, on a trip to visit friends or family, or simply to shop at towns downriver.  As people crowd onto the boats, hawkers are selling snacks or drinks for the journey and kids and dogs of uncertain parentage are running along the shoreline. 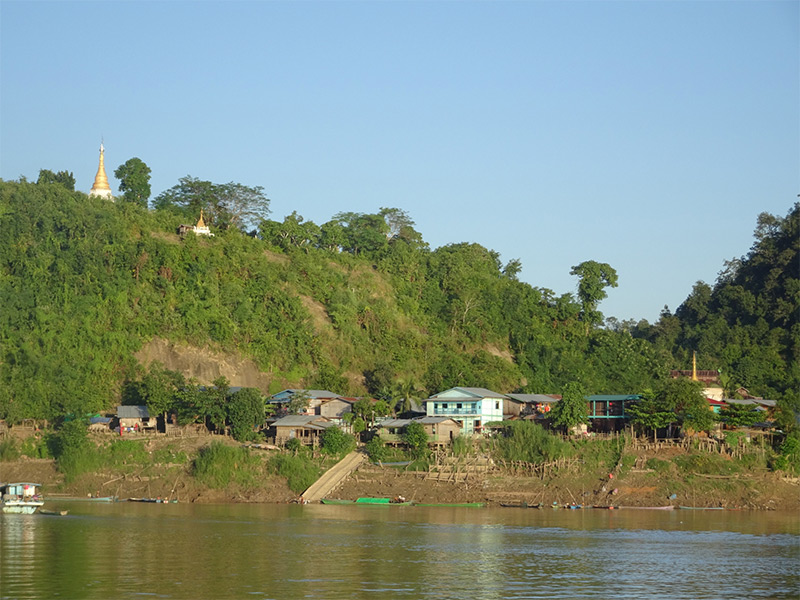 Other boats pull up along shore with logs, fish or other products destined for the local market and fishermen head out into the river to chase down the day’s catch.

Generally, the boat makes two stops a day to visit local towns and villages. In villages, houses are frequently built on stilts to protect from possible flooding. Some of the homes consist of woven palm mat and thatched roofs. Others are made of teak, boast interesting designs and are topped by tin roofs. The houses are open to the air, but beds often have mosquito netting for protection.

Major crops are rice, beans, chickpeas and lentils. Floating along the river, you can see farmers guiding their water buffalo or brahma bulls as they plow the furrows.  Villagers keep chickens, pigs and an occasional’ goat, and all wander freely in and out of the homes.  Some communities grow thanaka, a cream made from the bark of trees, that acts as sunscreen and is worn by almost all Burmese men, women and children. 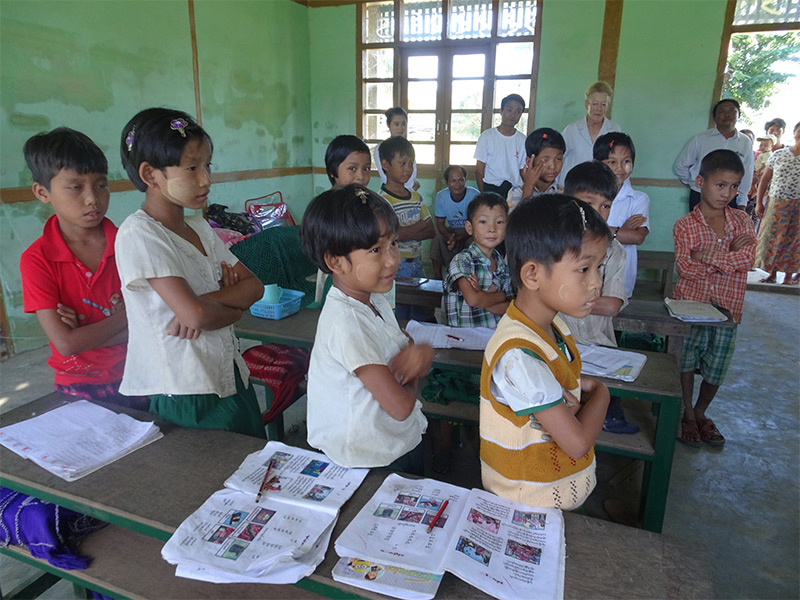 Most villages boast at least an elementary school, although books, notebooks and pens and pencils are sparse.  Wall decoration is rare, multiple grades occupy the same room, the teacher is frequently only a high school graduate and learning is by rote.

There are also a few larger towns along the river, such as Mawlaik, the administrative capital of Chin State and home to the third oldest golf course in Myanmar. In the center of town you see new, larger, multi-story apartment buildings blended with smaller old houses. Bullock carts, bikes and motor cycles compete with cars and trucks, even though the roads for the cars and trucks are limited and frequently impassible.

The trip ends in Homalin, the farthest navigable point on the Chindwin for vessels the 41-meter size of the Pandaw. At one point the town was a major stop for the Irawaddy Flotilla Company during the British occupation. Then, in 1944, until their defeat, the Japanese occupied the town. Nearby the Uyu River flows into the Chindwin, and townspeople have found gold powder and nuggets in the sands of the Uyu. The people of the area include the Nagas and other tribal groups.

Even though the concept of a cruise seems simple, there is plenty of adventure and unexpected changes in the program. The Chindwin is one of the hardest rivers to navigate, with a fast- flowing current, many whirlpools and numerous shallows and sandbars along the way. Logs and other obstacles flow by, the rudder can get caught in fishing nets, and other delays can occur. 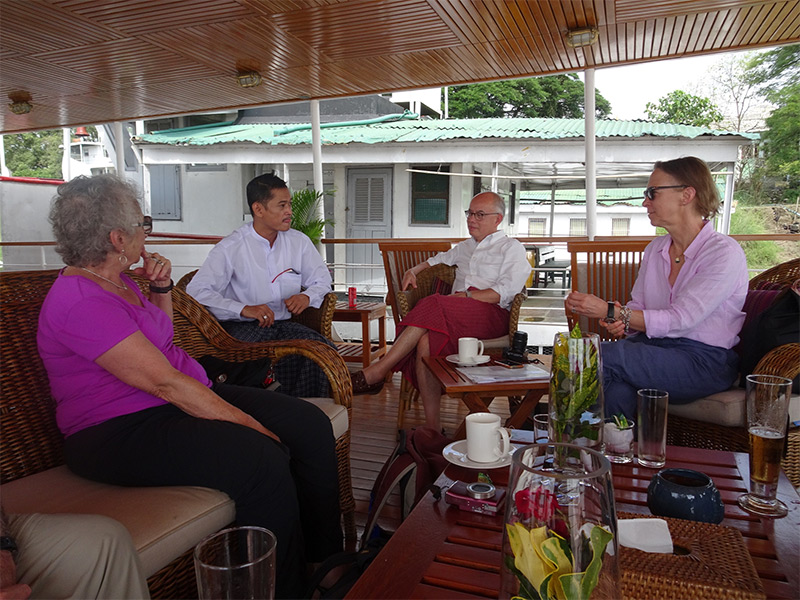 Thus, the itinerary can vary slightly with each trip, and passengers need to be flexible and laugh along the way. Nevertheless, this is adventure travel at its best – an opportunity to wander a countryside that has seen few tourists (if any), sleep in a comfortable, air-conditioned room with showers, eat gourmet food, and sip excellent wine over dinner!

Have Questions? Reach Out Today.
3 shares