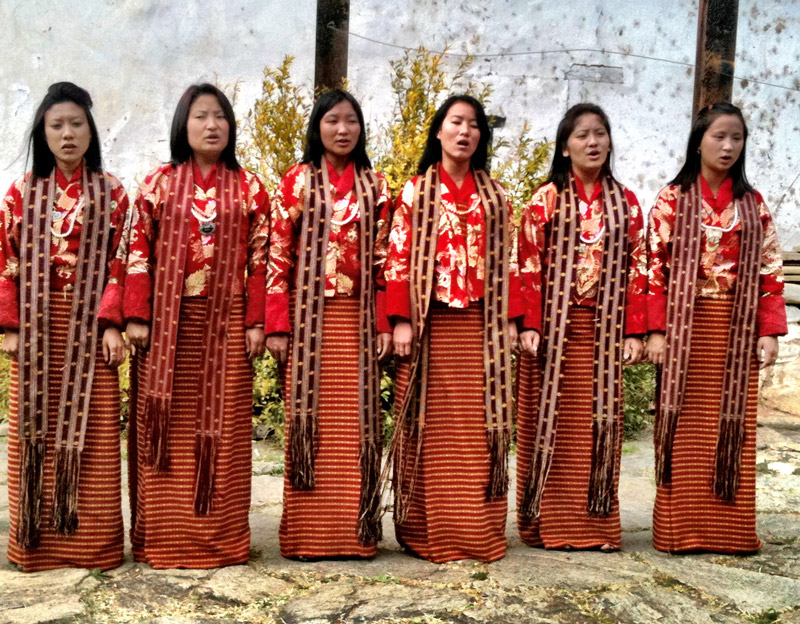 For Bhutan, being a tiny, isolated, never-colonized country has had advantages: A united people, a common religion, an appreciation of happiness, and centuries of cultural continuity. Luckily for today’s travelers, change came late to Bhutan, so many of its traditions have survived. Today, for example, those who travel Bhutan see an abundance of evidence of the country’s thirteen traditional crafts. Especially ubiquitous are examples of the well-preserved art of textile weaving.

Throughout Bhutan, in private homes, weaving villages, schools, museums, markets, festivals, and on the streets, you will see glorious examples of textiles with patterns that have remained unchanged for centuries. Two reasons for their survival are that traditional clothing is required for official and public events, and they are integral to the country’s celebrations and festivals.

Western clothes may be making inroads, but look closely at the street fashion: A young woman may be wearing a t-shirt under her kira, but that traditional dress is the same as the one her grandmother wore. Its threads may be handspun silk, cotton, or yak hair, and the pattern represents the region where it was woven. Today, weaving in Bhutan is more than a craft; it’s an art that tells a story. 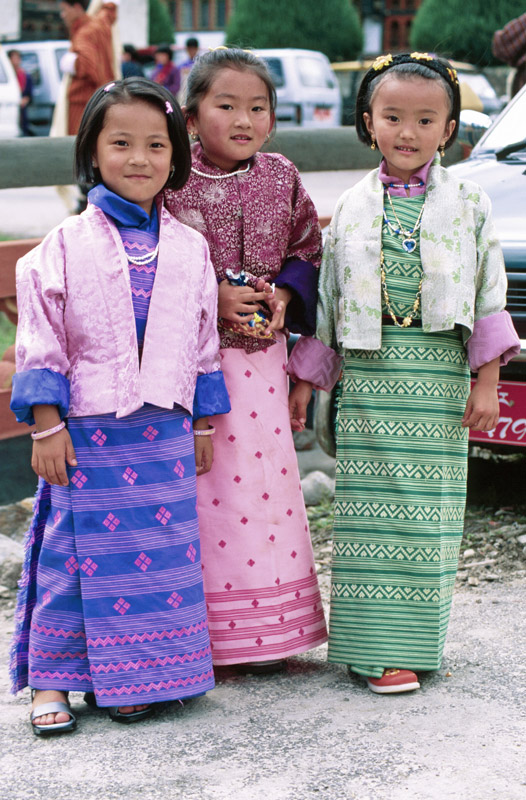 The colorful textiles of Bhutan are often festooned with symbols of Tantric Buddhism, the state religion. Some textiles, like the cloth of thangka hangings, are religious objects, but even the fabric of a scarf or a coat is likely to have some spiritual significance.

The motifs and patterns also convey much about the weaver’s life–the village where she lived (Yes, most weaving is done by women.) and the natural environment that surrounds her. The color alone may be symbolic, revealing the wearer’s birth month or rank in society.

It wasn’t so long ago that every woman learned how to weave, usually by watching the other women in her household. Some still do, beginning to learn their craft when they are as young as seven. In this way, techniques, designs, and materials for dying and weaving have been passed down from one generation to the next. Today, most women and some men continue to learn from their family members, but now there are also schools and workshops that teach the ancient ways as well as inspire creativity.

We have Shabdrung Ngawang Namgyel, the Tibetan lama who unified Bhutan in 1634, to thank for today’s textile treasures. He established rules that covered everything, including how people should dress. At one time, even farmers in the field were required to wear traditional garments when they plowed.

The rules have loosened a bit since the 1970’s when tourists began to travel Bhutan. The state requires that Bhutanese men and women wear traditional dress at all official functions and when in public places, government offices and schools. They are also expected to wear traditional clothing when near monasteries and temples. Festivals are the place to go to see the finest and most colorful clothing and costumes.

Women’s Wear. The basics for women and girls are a wonju, or blouse; an ankle-length kira, or dress; and a tego, or a short, open jacket. A long, fringed kera, or woven belt, holds the kira in place at the waist. Regardless of social status, these are the three essential garments most woman wear in public. 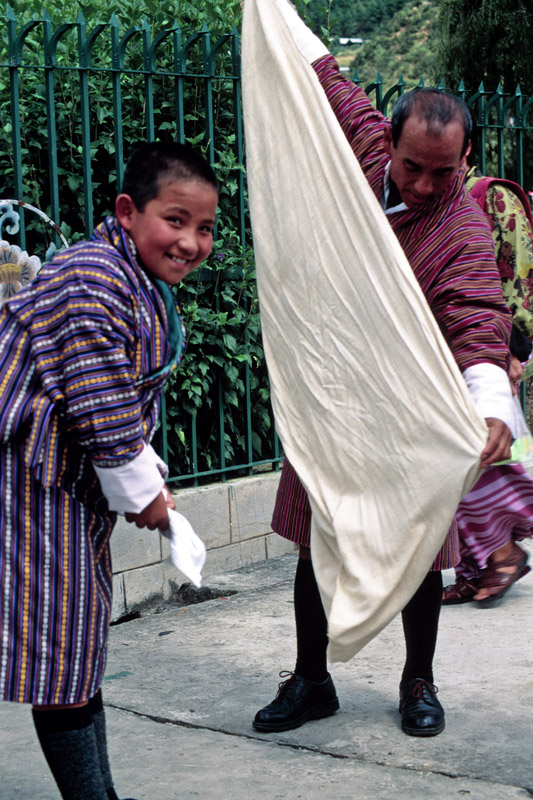 Men’s Wear. The basics for men and boys are quite simple: a gho, a knee-length, kimono-like garment tied at the waist with a kera. (Shabdrung Ngawang Namgyel himself invented the gho to distinguish a Bhutanese man from a Tibetan.) Underneath the gho, a man sometimes wears a shirt, or tego, with long sleeves and turned up cuffs. Above his belt is tied a pouch, which today is more likely to carry a cell phone than betel nut or a dagger. When it’s cold, a man may also wear domtha, or traditional cotton or silk trousers. Knee socks are worn on the legs, although some men now wear modern pants beneath the gho.

Accessories. Although the classic elements for men and women were established by decree in 1989, the uniformity stops there. The designs and textures of these garments speak colorfully of the wearer’s position–geographic and official. So do the high boots and red and turquoise beads and silver pins and buckles.

For a finishing touch, both men and women drape long, ceremonial scarves over one shoulder. For men, the color of this kabney indicates his rank. A commoner, for instance, wears a white kabney; blue scarves are for members of the National Assembly or Parliament, and only a head abbot or the king wears yellow.

For women, the scarf, or rachu, can be almost any color. Typically dark red is reserved for royalty or the very rich, Members of the National Counsel wear blue. For ceremonies and other major events, a rachu is usually silk and embroidered with intricate designs. Women members of the royal family might wear a rachu woven in an especially elaborate pattern.
For everyday, a rachu is not just decorative. A mother, for example, can tie the long scarf in a certain way to carry a baby or packages. 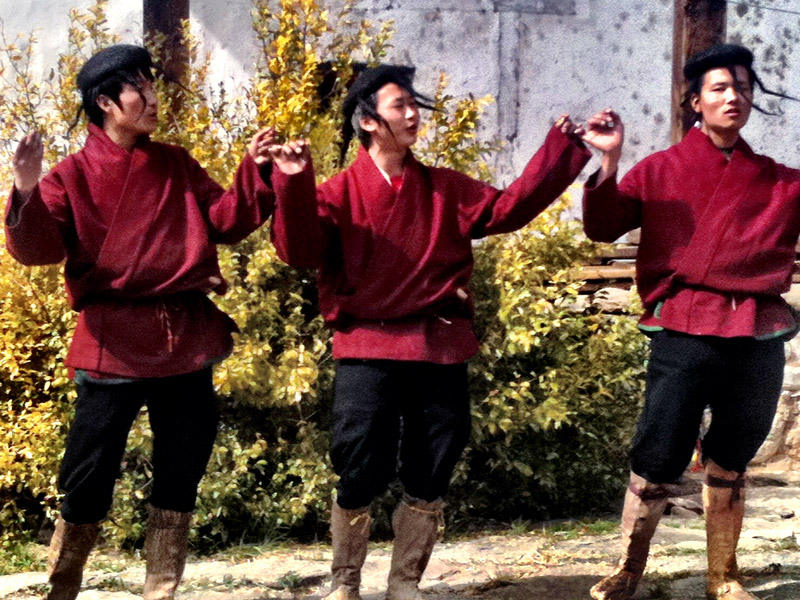 Bhutan has many diverse ethnic groups that wear their own unique traditional clothing. For instance, Doya men and women wear a pokhi, a wrap-around dress of woven nettle fibers. Brokpa men wear white wool trousers very similar to Western culottes. Red and green wool jackets make the locals from Merak and Sakteng in the east easy to spot at a festival. Men in southern Bhutan wear a garment similar to the required gho, but it is made by precisely folding a large square of fabric.

A Land of Valleys and Weavers

The mountainous terrain, and more importantly, the deep valleys in between allowed various ethnic tribes to remain isolated from each other until modern times. Consequently, their textiles reflect the weavers’ environments.

As climates vary, so does the cloth. Silk and cotton clothing might have been de rigueur in the warm, dry east, while heavy wool fabric is worn in central Bhutan.

The aboriginal Tshanglas, or Sharchops, in the east continue to work with raw silk. The Bumthaps of central Bhutan raise yaks and sheep, so they weave with wool and yak hair. The nomadic Brokpa of far eastern Bhutan spin and weave with wool to make their traditional thembas, the heavy and warm capes worn by women.

Each of Bhutan’s twenty regions has its own patterns. 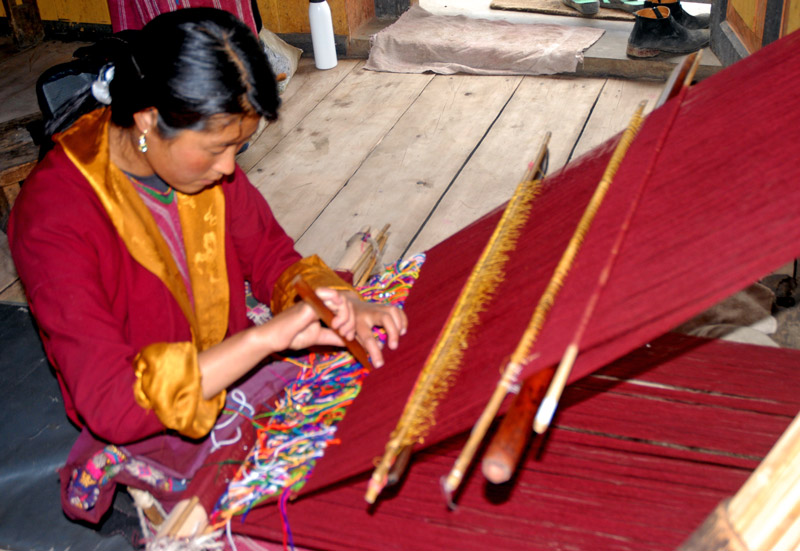 For instance, the textiles made in the “Valley of the Weavers” in the Lhuentse district of eastern Bhutan are especially beautiful. Kurtoep women of Lhuentse villages weave pure silk in intricately patterned fabric mostly on back strap looms, just as their ancestors did. The Kurtoep weaving process is quite difficult and requires years of training. Not surprisingly, the royal weavers, who have the luxury of time to devote to their craft, are the most expert at creating these textiles.

The technique involves a kind of embroidery on the weft to create an elaborate and complex design on a blue, black, or white background. This highly prized kushuthara makes an elegant–and expensive– kira to be worn on very special occasions. Keep an eye out for weavers selling them at festivals in Thimphu and Paro. You may also find kushuthara at upscale shops catering to tourists.

The Art of Necessity

Obviously weaving fabric for clothing was an essential craft in ancient times, but in turning this necessity into an art, the Bhutanese weaver tapped into the spiritual aspect of her life. 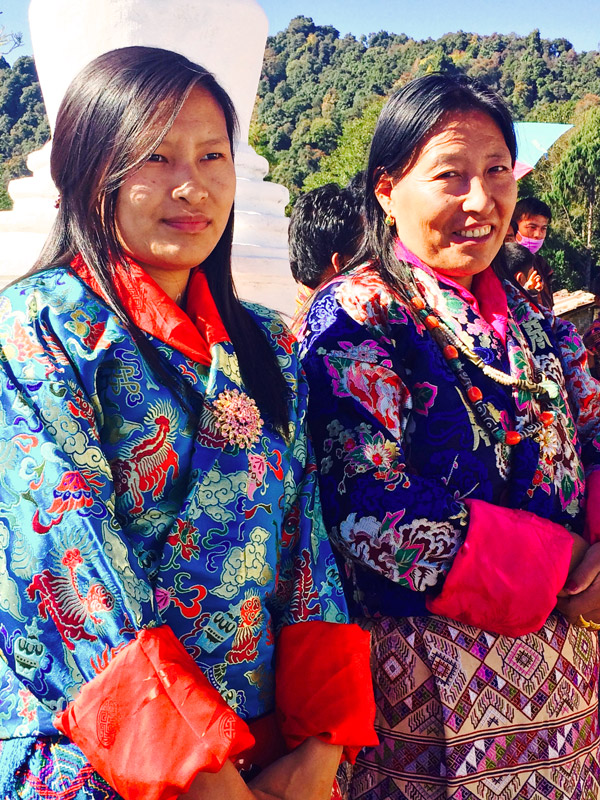 In fact, art and life continue to be inseparable in Bhutan. For example, the Bhutanese consider contemplation of color a spiritual exercise. No wonder that they are so expert at natural dying and combining varied hues.

Metallic and acrylic threads, synthetic colors, and modern mass production are making inroads in Bhutan’s textile market. Many of them are quite beautiful and affordable. But the most valuable and authentic textiles are those that have survived for centuries in a temple or in a special chest in a Bhutanese home. If you go shopping for textiles–antique or newly woven–enjoy the experience of contemplating the colors and patterns as the person who wove them did.

Have Questions? Reach Out Today.
29 shares

Does the peaceful culture and rich history of Bhutan entice you to consider traveling Bhutan?