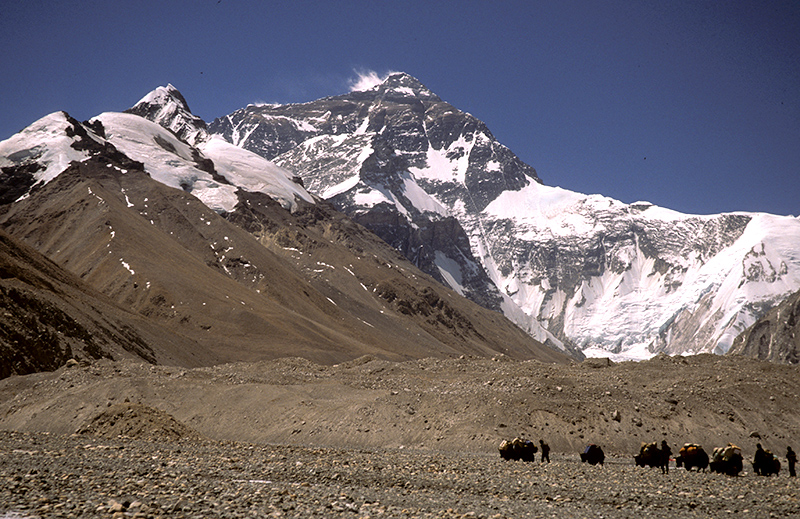 The body, carried by the Tibetans up the hill from the monastery, is wrapped in white cloth and tightly tied.  I follow this bundle, walking with my two companions in the crisp, clear, early morning air. We walk up along the kora, or pilgrimage path, which is lined with prayer flags, to the funeral site.  The top of the hill is not far; but at an altitude of more than 15,000 feet, we pace ourselves, breathing deeply.  Each of us wonders about the ceremony we will witness, a rite whose viewing is usually forbidden to tourists who travel to Tibet. The family in whose footsteps we are presently walking, however, has invited us.

A Reason for a Tibet Ritual 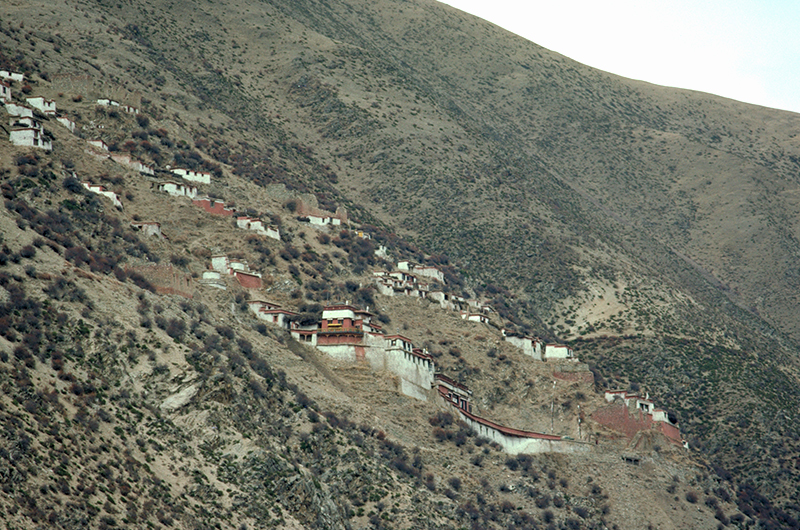 I have heard of sky burial. It’s a necessity in this very high land, where there is insufficient wood for cremation and burial is impossible in earth frozen for most of the year.  This monastery, Drigung, is one of the two most auspicious sites in Tibet for future reincarnation.  To the Tibetans, a rainbow to Sitavana in India, near Bodhgaya, binds the monastery with a rainbow  to the site where Buddha attained enlightenment.  Sitavana is the most famous of the eight Indian charnel grounds. 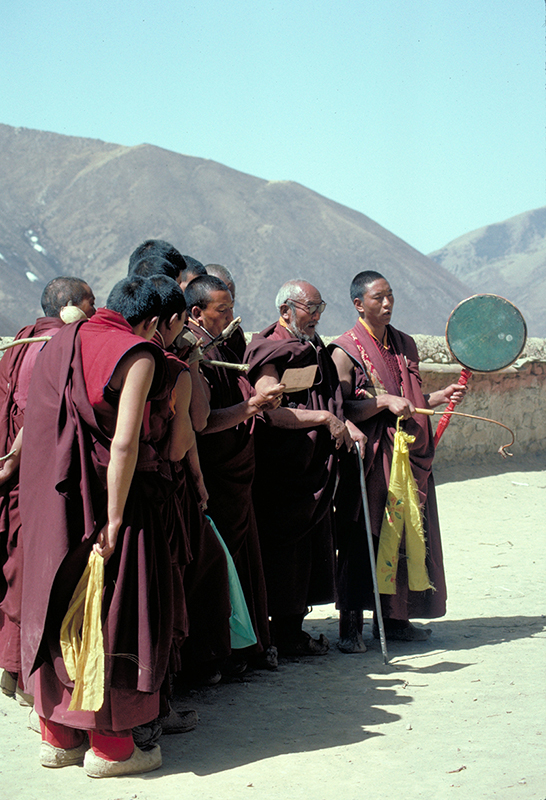 Near the top of the hill a low, white, single-story building with a large circle of rocks in front comes into view.  The rocks, I learn, represent the mandala of Demchok, and symbolize the moment of attainment, the breaking through of perfection.  The Tibetans lay their white bundle on the edge of the rocks and walk over to a house.

Some red-robed monks, curious about why we are here, greet us on the path.  They are part of the Kagyu school, founded in the 12th century by Rinchen Pel, a charismatic leader in the lineage of the great poet and philosopher, Milarepa.  Our travel guide is Tibetan, allays their concerns, and the monks become very friendly.  Talking, we notice several large–no huge–Himalayan vultures flying overhead and landing nearby. 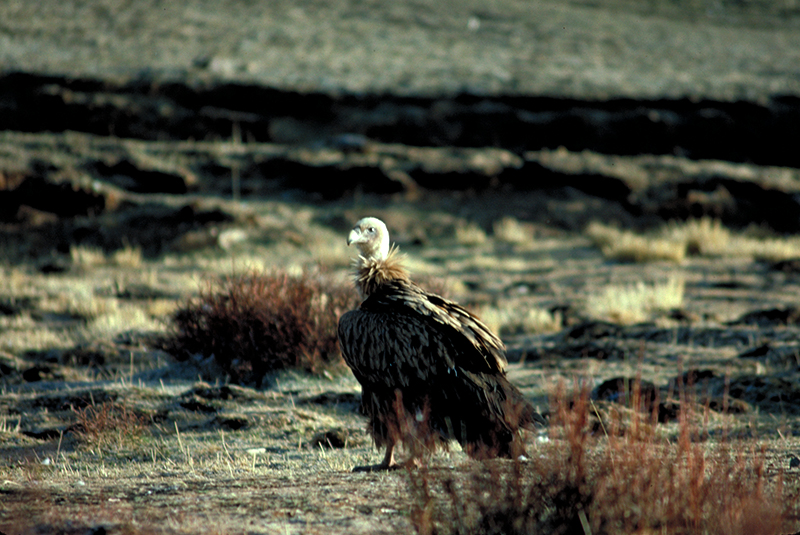 We cannot photograph the burial, but we can take pictures of the birds.  I use the opportunity of a vulture close-up to photograph the house and body, hoping the picture will come out.

As we talk with the monks, more and more vultures descend on the scene. They, at least, seem to know what to expect.  I think of a crowd gathering for a rock concert where seats are on a “first come, first serve” basis.  Soon there are several hundred huge birds jostling each other for space on the hillock overlooking the rock circle below.

Other people have arrived; and now there are two large bundles and one small one on the perimeter of the rock circle.  Behind the rocks and to the left of the white house, people are putting juniper branches and tsampa, or barley flower, into a large, stone incense burner.  The mixture of tsampa and juniper releases a wonderful fragrance.  On the other side of the building, before a small outdoor altar, kataks or white prayer scarves hang.

Symbols for the Living 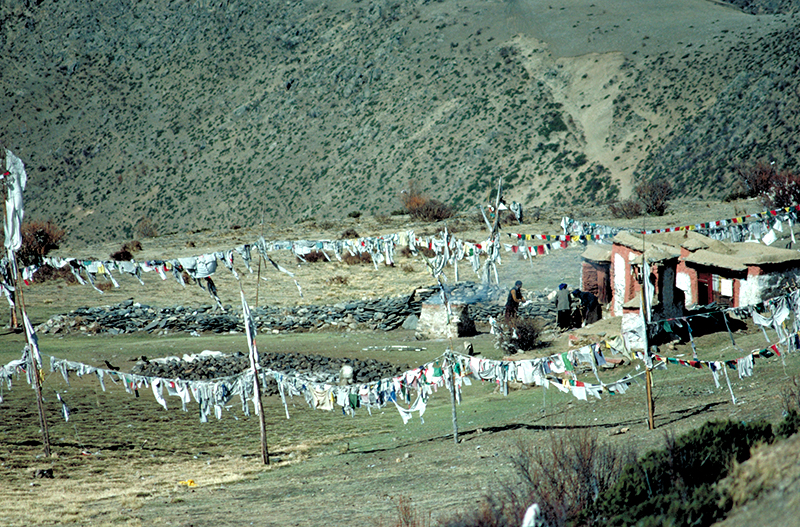 The circle of black, smooth rocks is quite large. Most are hardly unusual. To the left are some large flat stones and fairly centered in the circle, a tall prayer stone rises above the others. It points towards the clear blue sky. Legend has it that this is a self-manifest mani stone, a special rock that magically appeared aimed at the heavens, without any human assistance. 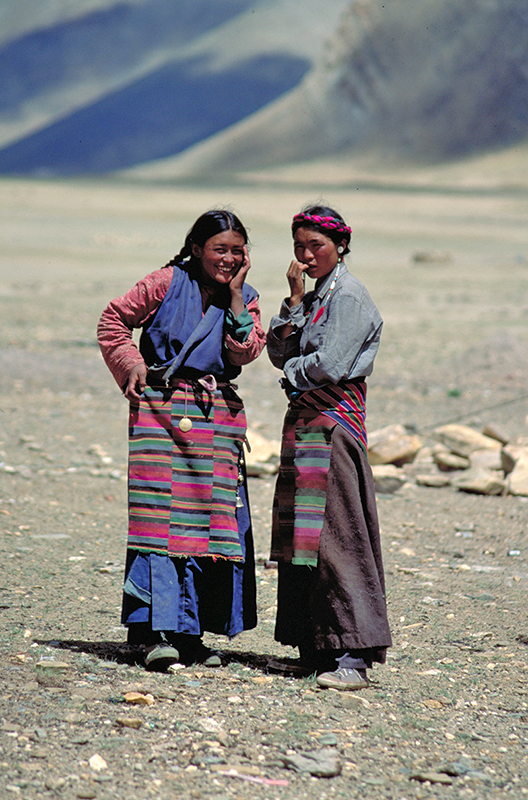 We walk to the house with the monks, who show us two small inside chapels.  One contains hair shaven from the dead.  The other, they say, contains a footprint of Padmasambhava, the great teacher who brought Buddhism to Tibet, subduing the fierce, ancient Bon-Po gods.  Our guide slips a photo of the Dalai Lama onto one chapel’s altar, and I regret his warning to leave all photos of the Dalai Lama at home in America. It would have pleased me to leave a piece of myself in this distant Tibetan holy place.  But perhaps this thought is only pride. I try to let it go.

More and more vultures have assembled on the hillside. There are so many that several monks and family members move in front of them with whips and sticks to keep the birds from the bodies. The morning’s “rock stars” aren’t easily deterred, I think wryly!

Caring for the Dead

Four rogyapas, or butchers, finally go over to the two large bodies, haul them out into the center of the rocks by a large standing stone and a low flat one, unwrap the corpses, and nonchalantly flip the grayish white contents onto the stones.  An acrid stench of rotten meat fills the air. I gag and move closer to the incense burner where the family is rapidly adding more brush and tsampa.

“These are dead people,” I think, curious both about what they look like and what I am feeling.  A piece of me is watching the events around me.  Another piece, detached, watches me. I feel no real emotion, only wonder at what is happening.  I remember seeing a dead body on one of my treks. It was a porter who fell into a river and drowned.  “To see a dead body is good luck,” said one of the Sherpas at the time. “It reminds us of our mortality.”

The four rogyapas lay the bodies on their stomachs. I’m told they are the bodies of a seventy-year-old man and an eighty-year-old woman.  The small bundle, a six-month old baby, rests wrapped off to the side.  Taking a large knife, the men score the backs of the bodies, from the buttocks up, and begin cutting from the head.  Then they start to skin the bodies, tossing the flesh over the stones, sharpening their knives again and again to facilitate their work.

The monks and families have formed a phalanx in front of the vultures, who are pressing to get at their dinner.  Whips snap, sticks crack the ground. This is serious crowd control! 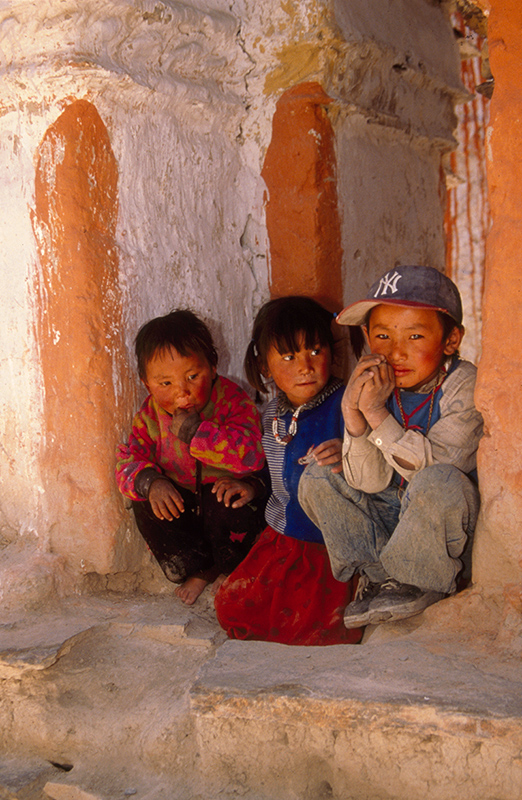 Suddenly, two vultures break through the “police line,” and the guards give chase.  The break signals a stampede as the birds push past their guards onto the rocks. Hundreds of birds are fighting and growling like dogs over meat. I’m watching a vulture tug of war over human flesh.

At last the rogyapas go to the small bundle and unwrap it.  A nun approaches chanting, “Om mani padme hum”  (The jewel in the heart of the lotus) and beats off the vultures.  They snarl menacingly, but retreat. I think of Hitchcock’s, The Birds.

The men skin the baby, as they did the old people, and the vultures taste tender meat.  “What,” I wonder, “will remain when the birds leave?”

The rogyapas take the now bloody white cloths that covered the bodies, run down the hill, and heave the material over the side. More tsampa is added to the incense burner, and the men clean and sharpen their knives.

The vulture crowd has thinned a bit. The rogyapas resume their work, scraping more flesh off the bones.  A vulture grabs a head and tries to run off.  A man gives chase and reclaims the booty. 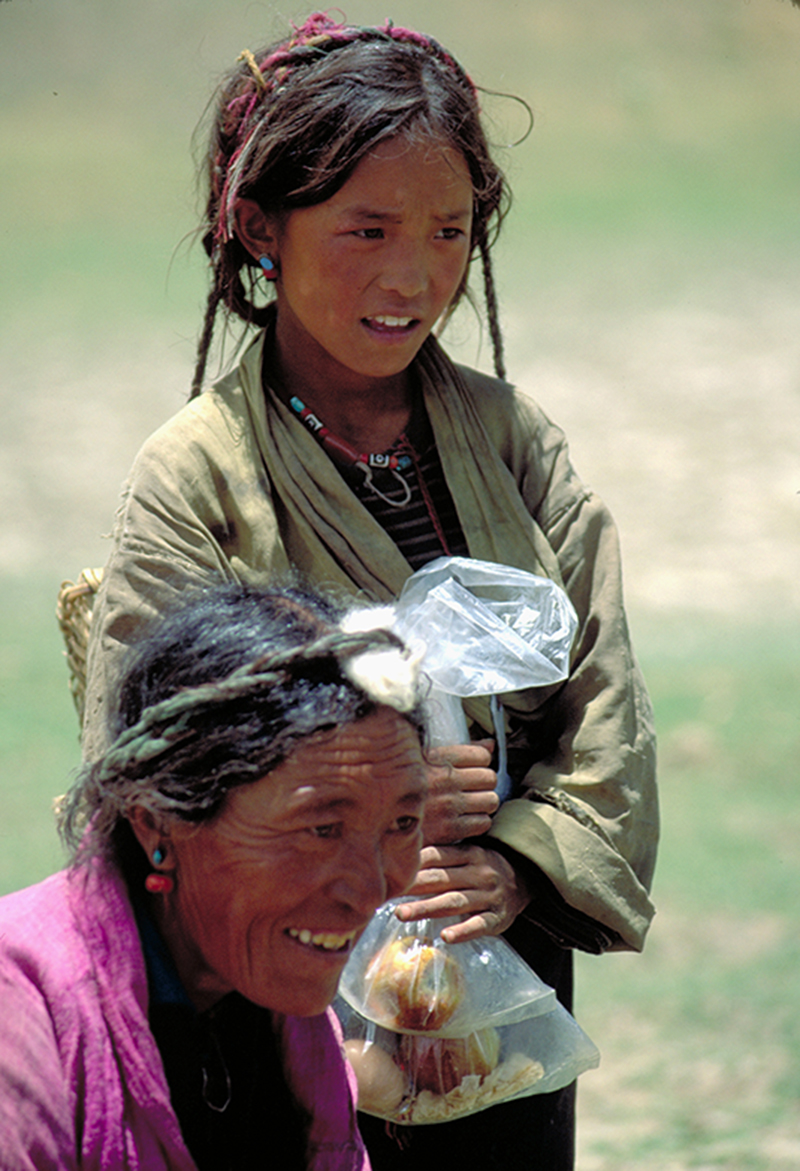 The monks and family members once again crack whips to drive off the vultures, leaving only skeletons on the rocks.  The men collect the bones.  This time they have brought a large hammer wrapped in cloth and a large pail of tsampa.  They cut the heads off the skeletons, setting the skulls aside. They begin to smash the other bones, mix the shards and flesh with tsampa, and spread the flattened mixture over the rocks. I think of veal scaloppini. The travel guide is cracking jokes, perhaps to alleviate the tension we all feel.

The rogyapas turn finally to the heads, scraping off the remaining hair.  Then, for the first time, they, too, say prayers before smashing the skulls.  Hammers are raised, there is the crunch of bone, and the broken skulls with their contents are mixed with tsampa and spread over the rocks.

Returning to the Living 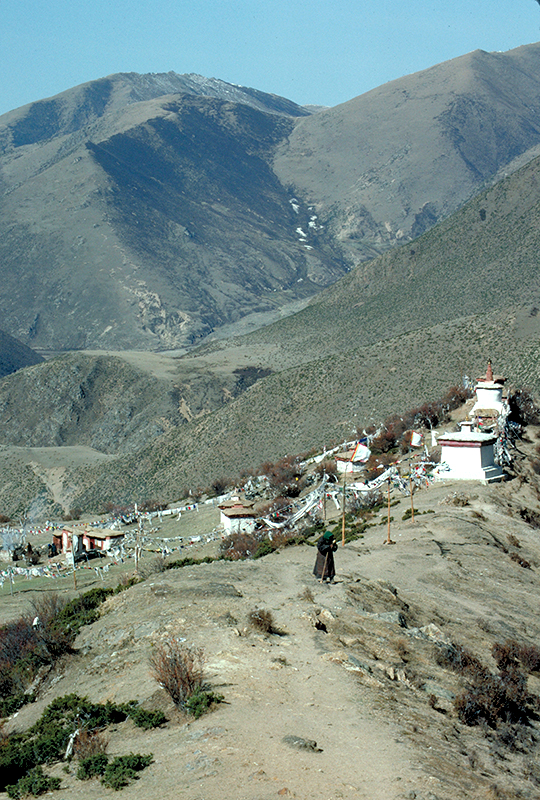 By this time the hilltop is filled with men, women, and children praying, playing, or simply watching the spectacle.  The rogyapas wash their tools and hands, and fold their bloodied outer clothes into a neat pile.  The families pass out a snack of salt tea and barley flour to the burial detail and family friends. One, a Khampa, a Tibetan from Kham, wears a red band in his hair, turquoise earrings, a black wool robe, and Tibetan boots. He hands each of the burial detail some money.  I recognize him as the man who squatted outside my tent last night as I played my guitar.  He smiles at me. A last clean up of the area is done.

Then, together with the entourage, we head up the hill to finish walking the kora around the monastery. This kora has tasks along the way for each pilgrim to complete.  Each time there is a chorten or religious monument, we stop and circle around it three times.  At one point we run up a steep hill, holding our breath until we reach the top.  Now we are all laughing and joking. What did we witness just a few moments ago? 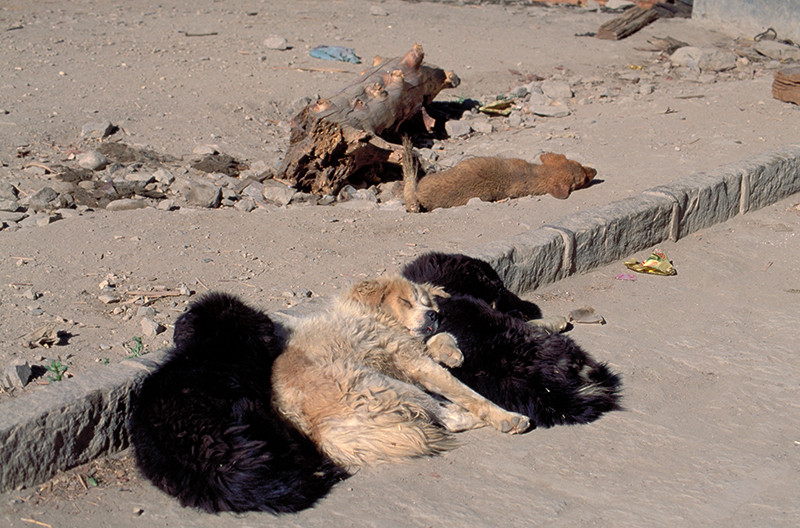 The old nun walks with us, giggling, praying, and twirling her prayer wheel.  (Between turns of these prayer wheels, prayer flags and sheets of paper that are thrown to the wind, Buddha receives more daily prayers than any other god.) We come to a small cave and, hearing muffled noises, peer inside.  Squealing, rolling fuzzy bundles of puppy fur come tumbling out to be picked up and cuddled. Life, after what we have just witnessed, goes on. We witness the miracle of birth…and death.  All of us smile and play for a long time with the puppies before finishing the kora.

A short distance away the rogyapas are washing themselves and their clothes in a small natural waterfall, decorated with yak horns and red ribbons.  This fountain has been made holy by the blood of a female yak that came here to drink, and the people believe that the waters wash away bad luck.

I wait until they are done, and then thoroughly scrub myself.