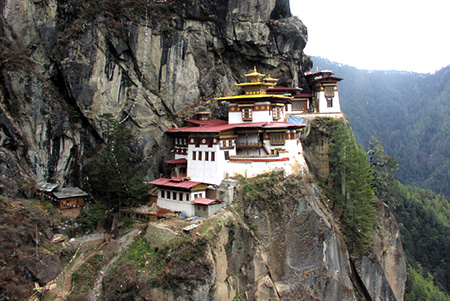 Clinging precariously to a sheer rock cliff overlooking the Paro Valley approximately 3000 feet below is a cluster of four temples, eight caves, and several buildings that make up Bhutan’s most famous monastery, Paro Taktsang, or Tiger’s Nest Monastery. For tourists, no tour or visit to Bhutan is truly complete without a trip to this iconic religious site.

Legend has it Guru Rimpoche, flew to Taktsang back in the 8th Century AD on the back of a pregnant tigress, the manifestation of the guru’s consort, Yeshe Tsogyal. For three months, three days, and three hours, Guru Rimpoche meditated in what is today called the Taktsang Senge Samdup Cave, before emerging in eight different incarnations. A statue of Dorje Droloe guards the entrance to the cave. 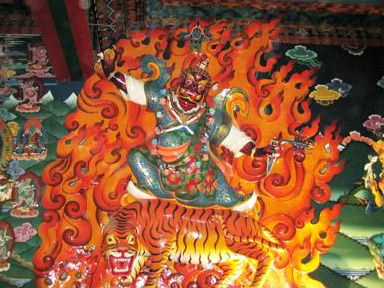 Over the centuries, famous Tibetan saints came to meditate at Tiger’s Nest Monastery, including Milarepa, Thangton Gyalpo (Bhutan’s Iron Bridge Builder), and the Terton Pema Lingpa. Construction of the monastery began in the 1630s. During the 1644-46 war with Tibet, the Shabdrung prayed to Guru Rimpoche for success. Upon victory, he wanted to build a temple to honor the Guru at Taktsang. The monastery was finally completed in 1692.

The walk to Taktsang is not easy, particularly for those unaccustomed to its altitude of close to 10,000 feet. For the most part, the path is a continuous uphill march, interrupted by rest stops to catch one’s breath, admire and photograph the astonishing views of the Paro Valley, listen to the sound of tinkling bells and waterfalls cascading down the sheer rock walls (some 200 feet high), and taste tea or enjoy a meal at a cafeteria. 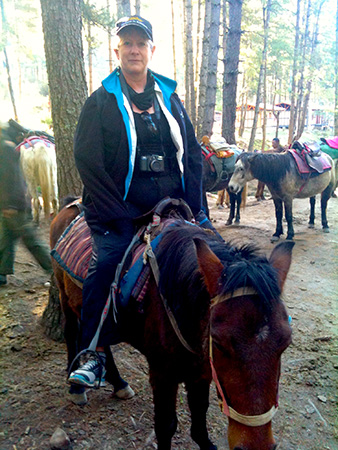 Unable to fly like Guru Rimpoche, pilgrims and tourists have a choice. The distance to the main buildings of Taktsang Monastery from the trailhead is about 2.6 miles with an altitude gain of about 1700 feet. The ambitious traveler can hike all the way up and down on foot. The less energetic can take a horse part way up as far as the cafeteria. At that point, riders need to walk down and then up about 1000 steps to the monastery. Too steep for horses, both groups must walk down.

For most, the Tiger’s Nest Monastery, called Taktsang Palphug, is the end of the journey. Pilgrims and ambitious hikers can continue to some of the other holy sites that are part of the Taktsang complex. Eventually arriving at Taktsang Zangdopelri, named after Guru Rimpoche’s heavenly paradise.

Far more than a walk, the climb must be made to reach the monastery. It is a meditation on the essence of Taktsang and the concept of the “Tiger’s Lair.”

Trekking with the Tiger

The tiger has always been a symbol of strength and force in tantric Buddhism.  In the Eastern Tibetan traditions, the tiger’s skin represents the transmutation of anger into wisdom and insight. As T. Sangay Wangchuk wrote, the tigress here embodies the anger and aggression with which all human beings are pregnant. That the tigress is in flight implies that anger and aggression have no borders.

Bhutanese mythology attests that Guru Rimpoche arrived in Taktsang on the back of a pregnant tigress and spent his time in a cave meditating and rehearsing the Phurbu or Vajrakila teachings. The Phurbu is a three-sided dagger, where each side represents one of the three “poisons” of Buddhism – anger, greed, and ignorance. Left on unchecked, these poisons eat away at the human spirit and tie mankind to the wheel of life. When the blade itself is in the hands of the right person, however, it has the power to transform and control these negative energies or poisons.

Thus by “riding” the tigress and mastering Vajrakila teachings, Rimpoche kept harmful forces from breaking out into the world. 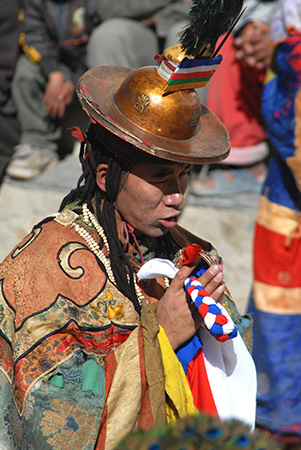 The Climb for Us

The walk to Tiger’s Nest Monastery is more than just a slog up a mountain. Each person climbing up the trail should ask, “Why is this mountain here? What do I have to learn from it?” From a Buddhist perspective, the climb is a meditation on anger and how to control it.

As Sangay Wangchuk writes, “Like the Guru, we are all riding the AA [anger and aggression] bomb.  “Subdue these forces and live a happy life, or let them exist untamed within us and create unhappiness.” For us, as for the world, the forces of anger and aggression need taming if we are to harvest happiness.