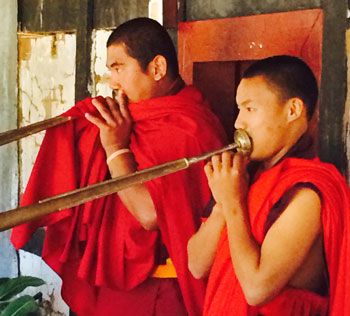 Centering Your Travel to Bhutan Around Festival Time

It’s always festival season in Bhutan, but fall wins the prize for the most celebrations. Between September and November, some 50 festivals take place throughout this sparsely populated country, only about half the size of Indiana. Some of the festivities last a day and others continue for a week. These festivals make fall the ideal time to travel to Bhutan .

Here are five fall festivals well worth witnessing. (Remember – festival dates are based on the lunar calendar and change from year to year. The dates below are for Bhutan travel this fall, 2017.)

Caution: If you want to see Bhutan in all its fall glory, book ASAP. Airline tickets and hotel rooms at festival time sell out fast. 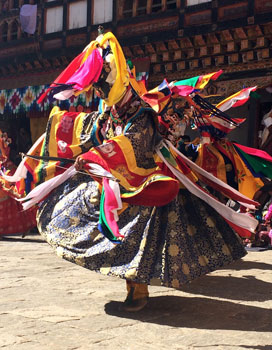 Tshechus are religious festivals that primarily honor Guru Rimpoche, who brought Buddhism to Bhutan. They depict the story of how good conquers evil. The Thimphu Tshechu is one of the two most popular Bhutanese celebrations of the year, with more than 3000 visitors arriving to participate in the rituals.

For days, horns blare and drums beat. Monks invoke the gods and reenact ancient events and myths dancing in wildly colored costumes while wearing masks. The audience witnesses a theatrical performance complete with skits – the Bhutanese version of public announcements – and songs and dances by school children and others. There are even clowns (the protective Atsaras) to entertain the crowds and keep away evil spirits.

Don’t miss the Black Hat Dance, done to dispel demons, and the Dance of the Terrifying Deities, both of which have been performed since the 1860’s. 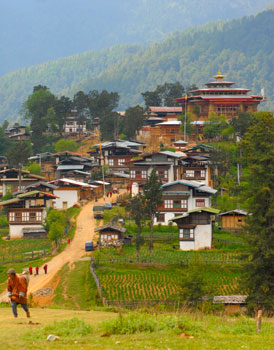 The Phobjika valley is the winter home of the Black-necked cranes of the Tibetan plateau. Every fall about three hundred of the rare birds begin arriving here from their summer home in China, to be welcomed with a festival in the courtyard of the 17th century Gangtey Monastery.

Throughout the day monks, government officials, school children and people of the valley participate in crane-themed dances and conservation-oriented songs and skits. When not watching the show, festival-goers wander the stalls to buy locally made handicrafts and food.

This festival is relatively new and has evolved as a local attraction and symbol of eco-tourism for travel to Bhutan. For nearly 20 years, a local environmental group has sponsored the daylong party, stressing the importance of conservation in this beautiful glacial valley.
Festival proceeds are deposited in a community bank account to encourage local sustainable development. 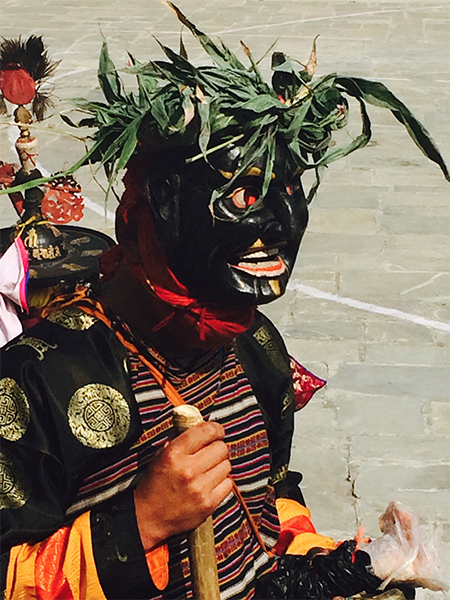 In the 7th Century, a Tibetan king built more than a hundred temples; two of them in what is now Bhutan. One of those temples is Jambay Lhakham (the Temple of Maitreya) in Bumthang in central Bhutan.

The Jambay Lhakham Tshechu is one of the most spectacular, celebrating both the founding of the temple and the visit of Guru Rimpoche. The first night’s kick-off is the fire ceremony (Jambay Lhakham Drup) and the ritualistic naked dance (tercham), where dancers wear only masks of various tantric deities.

The party continues for three days with historic and sacred performances by monks and locals. And, of course, what would a Bhutanese festival be without the clowns, yummy food stands, and handicraft stalls! 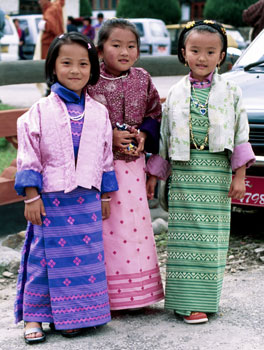 Mongar is one of the 20 dzongkhags (districts) in Bhutan and the fastest growing district in the East. Each district’s fortress-like dzong – a blend of administration building and monastery – has its own rituals, blessings, and sacred dances that are performed each year. The Mongar Tshechu takes place in the relatively new Mongar dzong built in the 1950’s.

The event provides villagers from Mongar and neighboring districts an opportunity to gather together, perhaps the only time they meet each year. Everyone looks forward to leaving their work clothes behind and dressing in their finest, often hand-woven, costumes. Masked dancers, twirling monks, singing students, and, yes, those clowns, are truly resplendent in their brilliant colors. 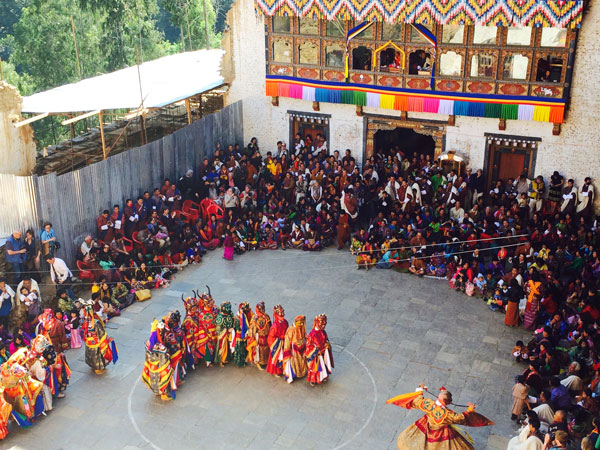 This festival, located in the courtyard of the dzong in Trashigang, Bhutan’s easternmost district, is a rare opportunity to see a meet-up of people from Merak, Sakten, and Assam in India and locals from the town and countryside. Visitors not only see the traditional tshechu performances, but enjoy songs and folk dances by entertainers from the different ethnic groups wearing costumes unique to them. Since Trashigang borders on Mongar and their tshechus overlap, you can enjoy both festivals while traveling to Bhutan.

Travel to Bhutan During Party Time

Harvest season is the time for fall festivals, but the Bhutanese celebrate important religious events and other holidays throughout the year, particularly during spring planting season. So, when planning your travel to Bhutan, time it for a festival. Without a doubt, the Bhutanese know how to party!