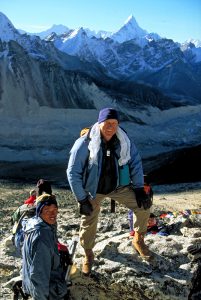 Just because you can’t be out of the office for more than two weeks, doesn’t mean you can’t tick “Himalayan trek” off your bucket list. In fact, it’s possible to hike in the Everest region and bag Everest Base Camp and Annapurna Base Camp from the sky!

On the other hand, if time permits you to travel leisurely and visit Nepal and the Khumbu region for nearly a month, there’s an astonishing, “off the beaten track” Everest trek that’s perfect for slow travel.

Got only a bit more than two weeks? Try a Himalayan trek that takes you past four of the world’s tallest, sky-touching mountains to Base Camp and back to your office in time to please the boss.

Here are three “trips of a lifetime” to match your vacation time, each with different perspectives of Chomolungma, the “Mother Goddess of the World,” as the Sherpas call Everest. 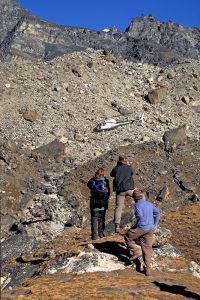 So much to see, so little time? Helicoptering allows the traveler to pack in the best of Nepal in just nine days. You can trek part way to Everest Base Camp and then take your own private helicopter to overfly it. As if that is not enough. The next day, you can helicopter up to a Langtang monastery for breakfast, and then fly over Annapurna Base Camp. There’s even time for some temple touring in Kathmandu, a helicopter trip to Chitwan National Park for a canoe ride, wildlife viewing in the jungle, and a visit to a Tharu village, home to some of the Terai’s native people.

Granted. This is a whirlwind tour. But, in addition to Everest and Annapurna Base Camps and Chitwan, local rest stops in the Khumbu region allow you to acclimatize to the altitude. Often you luxuriate for the next day’s journey in 5-star Nepali hotels and lodges, including the heritage Dwarikas Hotel in Kathmandu, the eco-aware Dwarikas Himalayan Resort in Dhulikhel, and the Barahi Jungle Lodge, a series of freestanding cottages facing Chitwan’s Rapti river. 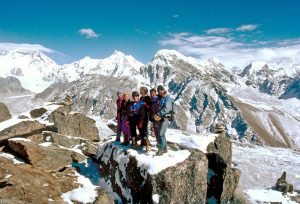 Can’t get enough of trekking in the Everest region? Try spending 20 days of this 25-day Khumbu saga wandering the trail from Gokyo to Everest Base Camp (the first star of the journey) over to the rarely visited Tawache Towers (the second star) and on to Ama Dablam Base Camp (the third star). Yes, there’s more than one way to go to Everest, and this is the ultimate!

As you hike the trails of Sagarmatha National Park up toward Everest, you encounter the local Sherpas, visit monasteries, and explore meadows and forests. Past farms, across rivers, and through villages, travelers have time to absorb and truly experience Nepal. You stay in a lodge in Machherma, where a yeti is said to have kidnapped a Sherpa girl to marry; climb up Gokyo Ri to gaze at Cho Oyu and other peaks; cross over and trek up to the Tawache Towers for an unusual perspective on Mt. Everest, hike through Phalang Karpo to Dugla, Lobuche, and finally Kalapatar and Everest Basecamp.

But the journey does not end at Everest. Make a side trip up to Chhukung, on to Pangboche and then climb along the Cholungche Kharka to Ama Dablam Base Camp, with views of Lhotse, Nuptse, Lobuche peak, Thamserku, Kanteigha, Tawache Peak, and, of course, “The Mother Goddess of the World, Mt. Everest. 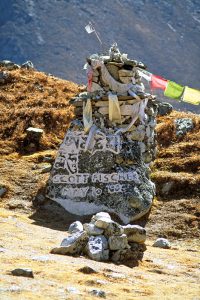 There’s time to shop in the bazaars of Namche, watch the sunset over Thamserku, keep an eye out for the Himalayan tahr and assorted wildlife, and have tea with other trave lers and mountaineers in cozy tea houses along the trail.

Two weeks into the trip is a reality check…. Along the edge of the Khumbu Glacier are stone chortens dedicated to Sherpas who died in an avalanche and three monuments to climbers who perished on Everest. Travelers pause here to pay homage to those brave ones and prepare for the next, most demanding day —the climb to Kalapatar. At 18,514 feet, it’s almost 1000 feet higher than Everest Base Camp (17,600 feet)!

This nearly month-long trip is an intimate visit to one of the most awe-inspiring parts of Nepal, a tiny country boasting eight of the world’s ten highest peaks.

NEPAL: EVEREST BASE CAMP AND KALAPATAR 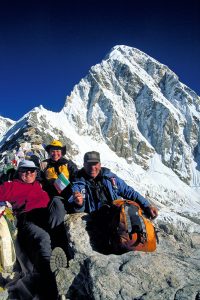 When nine days is too few days and 25 too many, this mid-range, 19-day trip, with 14 days of trekking to and from Everest Base Camp trek is just right. On the trek from Lukla to Kalapatar (18,514 feet), Ama Dablam can be seen in the distance. Poking through mountain villages, there’s time to visit with the locals and other travelers, and, perhaps have a cup of yak butter tea. The chorten-strewn trail passes through forests of blue pines and rhododendrons, across roaring rivers, by waterfalls, and eventually meets the rocky moraine of the Khumbu Glacier. In two more days—and more glacial moraines—there is the well-known, jagged terrain of the Khumbu icefall, the climb to Kalapatar with its 360-view of the snow-covered Himalayas, and the final destination: Everest Base Camp!

Along the way, there are rest days for acclimatization and a relaxing stay near the Thyangboche Monastery. These are days trekkers relish, because they can give their tired legs a break, visit with the locals or simply do nothing but take in the amazing scenery. With nothing to do and nowhere to go, one’s mind is free to meander aimlessly over the surrounding, sky-touching peaks.

The 14 days of trekking up and back to Lukla and the time in Kathmandu blend together into one life-changing experience. Travelers have often done something harder than anything they have ever done in life, bonded with people whose customs and lives are totally different, and returned to their world very different from how they left.