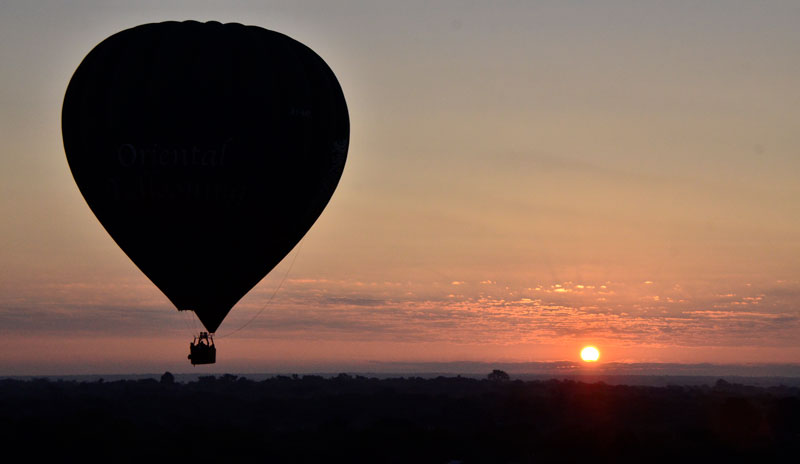 Burma (now Myanmar) is a survivor. Once the largest empire in Southeast Asia, today it’s one of the poorest nations in the region. Yet, despite sackings, Mongol invasions, dynastic wars, colonial rule, Japanese invasion, and one of the longest civil wars on earth, Myanmar’s heritage—and many of its ancient monuments–have endured. Traveling to Myanmar offers many lessons in survival, and the most beautiful and telling are the more than 2,000 Buddhist shrines in and around Bagan.

Throughout the turmoil of history, Buddhism has survived in Bagan (once called Pagan), since the 4th century. All across the 26-square mile plain of Bagan is a landscape dotted with golden spires and brick and plaster towers of ancient Buddhist temples and pagodas. If Angkor Wat and Borobudur amaze the visitor with their size, Bagan, once one of the most important Buddhist pilgrimage sites in Southeast Asia, will stun with the extent of its buildings.

Where to Start When Traveling to Myanmar

Although the complex of temples and pagodas represents only a fifth of the 10,000 that stood in Bagan before Kublai Khan’s visit in 1287, there are still far too many sites to visit in one day trip to Myanmar. Consider making yourself a schedule of no more than three shrines a day. In two days, you can visit the most important and unusual ones without succumbing to Stendhal syndrome—a kind of “art attack” brought on by seeing large amounts of art in a single place.

A good beginning is a balloon tour of the Bagan plain. The arial view reveals the breathtaking sight of temples and pagodas that dot the landscape.  Book your balloon ride well in advance. The sky-high ride is extremely popular when traveling to Myanmar, despite the cost of nearly $300 or more a person.

An Expert’s Guide to Temple Hopping in Bagan

Here’s a guide to the 6 must-see temples. (If you have only a day, pick 3.) Save the best of the remaining 1,994 for future visits to the Bagan Archaeological Zone and nearby regions. 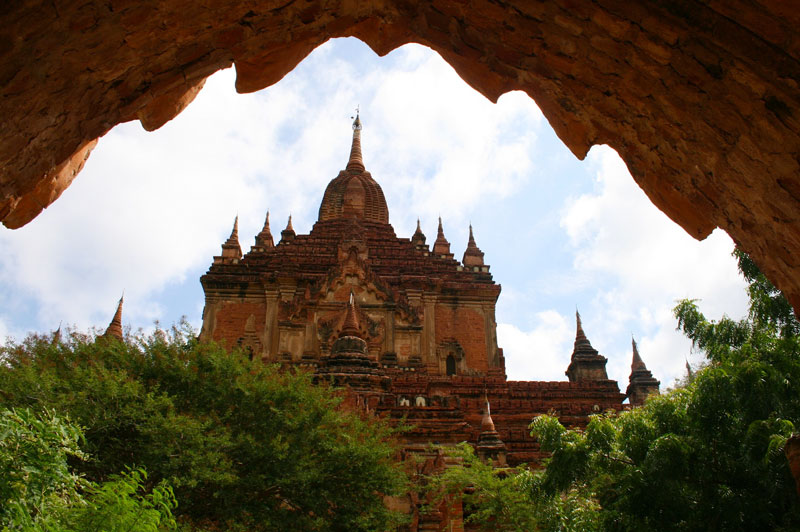 End to end, Ananda Temple, the largest temple, measures 290 feet (a bit shorter than a football field) and its topmost, pyramid-like terraces reach 167 feet. Four towering golden Buddhas look out from the central cube in the four opposing directions.  Doors of carved leak guard small Buddha statues that reside in niches of the four entrance halls.  Wall paintings, stone carvings, and elaborately decorated tiles cover each tier of the temple.  Built in 1105, Ananda is one of the oldest temples.

Fine frescos and paintings dominate the walls of Kyanzittha Umin, a low, brick temple built into a stone cliff near Shwesandaw Pagoda. No doubt some of the frescos were created by the 12th century monks who lived there, but Mongol invaders in 1287 left their marks, too. You’ll notice paintings of Mongol nobles and warriors along the long, dark corridors. Although Kyanzittha Umin lies both within the cliff and outside, it is representative of Bagan’s characteristic cave temples. 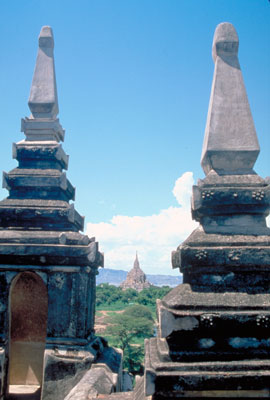 The bell-shaped stupa of Shwesandaw Pagoda sits on five receding terraces and towers 328 feet above the Bagan plain, making it even more imposing than the Shwedagon Pagoda in Yangon. King Anawrahta, founder of the Bagan Kingdom, built the pagoda in 1057.  Like most pagodas, this contains a religious relic—a hair of the Buddha—that was a gift to the King. Shwesandaw is sometimes called the Ganesh Pagoda for the stone statues of the Hindu elephant god, Ganesh that once guarded it.

Built in 1150, the tall spire atop Thatbyinnyu Pahto makes it the tallest temple in Bagan. Climb up the three receding terraces of the 200-foot high temple to see the Bagan plain in all directions. More than 500 depictions of the Jatakas (stories of the Buddha’s life) decorate Thatbyinnyu’s walls; and the intricate, tightly sealed brickwork is a temple hallmark. 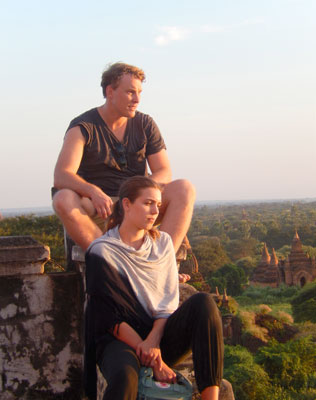 Built in 1218, the Htilominlo Pahto marks the spot where King Htilominlo was chosen to be the crown prince. Four large, golden Buddhas are ensconced on the upper floors of the massive 150-foot high structure, and the temple is topped with an ornamental spire from India.  Some wall paintings, carved reliefs, and intricate plaster carvings that once covered the brick structure have survived earthquakes. Try to see it again from a distance at sunrise.

In nearby Myinkaba is one of several of the region’s cave temples, Gubyaukgyi Temple (Myinkaba). It was built in the 12th century, around the time of the Ananda Temple and most others in Bagan. Like Ananda, Indian-style architecture influenced the Gubyaukgyi Temple. What’s different are the straight walls that distinguish it from most other monuments. Strategically placed windows light the inner walls and ceiling with sunlight. Many of these windows contain depictions of the Jatakas. 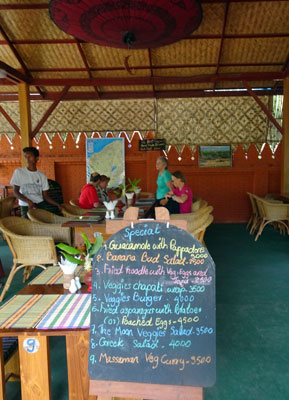 Whether you tour the Bagan plain on foot, by bike, or in a horse-drawn carriage, you will become hungry. A favorite spot for rejuvenation and nourishment is the Moon Vegetarian Restaurant (also known as Be Kind to Animals restaurant).  Chill out in the garden and enjoy a flavorful curry and a glass of beer or fresh mint tea. Many visitors claim it’s the best food in Myanmar!  Moon is off the main road (look for the sign), north of the Ananda Temple.

Explore Myanmar with Myths and Mountains

Explore our Myanmar trips and request a more detailed itinerary!