The Best States to Visit While Traveling to India

Most first-timers traveling to India head straight for the Golden Triangle for good reason.  Delhi, Agra, and Jaipur are the epitome of “Classic India.”  They are accessible to each other easily by car or train. Furthermore all three cities are repositories of ancient Indian treasures and iconic monuments. But to say one has traveled India and only made this circuit is like foreign tourists who say they’ve been to America but have only seen New York and San Francisco.

There’s a lot more to India, and visitors traveling to India who want to go beyond the tried and true should consider states such as Manipur, Assam, Gujarat, Sikkim or Jammu and Kashmir.  A visit to any one of them will give you a different view of India’s diverse geography, rich culture and diverse history.

Here are 6 of our favorite states to visit in northern India:

At about 8,600 square miles, Manipur is about the size of New Jersey.

Two million people call it home, many of them representing 33 different tribes. The majority of indigenous people here are the Meiteis.

Games! The game of polo originated here, but today Manipuri Polo is a bit different than that played on the manicured green fields of Argentina. For one thing, riders decorate their ponies.

Manipur Rugby is popular, and a great game to watch. Instead of a ball, the players play keep away with a coconut.  The name of the game Yubi Lakpi, Yubi is “coconut,” and Lakpi is ‘snatching,’ which gives you a good idea of how aggressive the players are.

The Manipuri-style Wrestling—called Murkna—is played for at certain, religiously set times. And if the Manipuri fighters don’t follow the rules, they may succumb to evil spirits.

The festivals that occur nearly every month have given the state the nickname “The Land of Festivities”. Traditional deities may be honored one month, a harvest festival the next, and always a 10-day celebration of the New Year. These festivities are a great incentive for those who are thinking of traveling to India again.

Just south of the eastern Himalayas, Assam is called the “Gateway to the East,” and is the largest of the northeastern 8 states.

At about 30,000 square miles, Assam is twice as big as its neighbor Manipur, and the size of South Carolina. About 16 percent of its 26.6 million people are indigenous, representing more tribes than any other Indian state. About 40% of the population are migrants from neighboring countries.

Tea!  Assamese Tea is famous throughout the world, and visiting the tea plantations may make you rethink coffee drinking!

Rhinos! Kaziranga National Park is a must if you want to see some two thousand one-horned Indian rhinos in one place. That’s more than two-thirds of the world’s rhino population.  The park is a living testament to wildlife conservation.

The mix of tribes and immigrants means there are dozens of reasons to party every month. Everyone celebrates Bihu, an Assam festival centered around farming.  It’s actually three festivals, corresponding to planting and harvesting seasons: April, January, and October. Bihu is truly a unique festival. 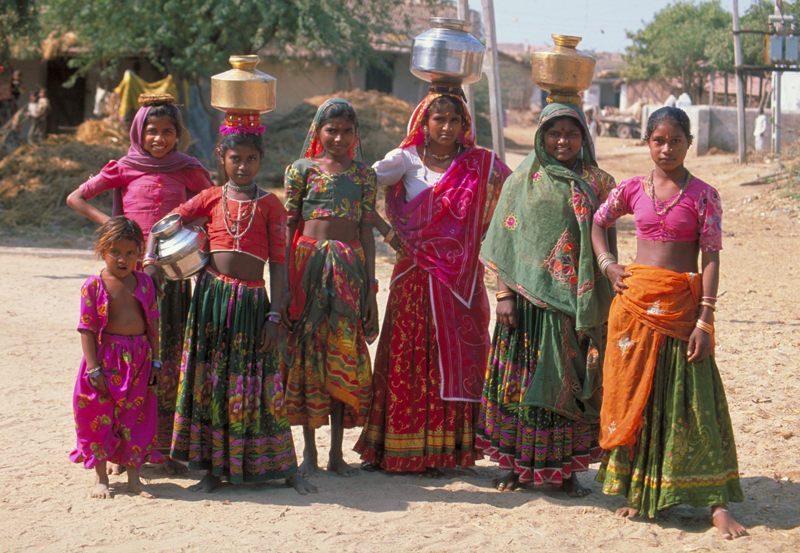 This “Land of Legends,” is home to one of the oldest civilizations in India.  Ruins from the stone age have been found there. It is where Gandhi was born and started his salt march to the sea, has camels that swim and areas that are underwater 6 months of the year. Those traveling to India with a passion for history should not pass up Gujarat.

At 75,685 square miles, Gujarat is nearly as big as Nebraska and has twenty-five times more people. The last population count was nearly 51 million people.

Architecture. Recently UNESCO named Ahmedabad a World Heritage Site – the first Indian city to be awarded the honor.  Temples, fortresses, and palaces scattered over the landscape are carved stone symbols of Gujarat’s long history and many religions. There are ruins pre-dating the Mohenjo-Daro-Harappa Civilization.  Jain temples predominate, but 11th and 13th century Hindu temples are said to be the most important examples of Gujarati design.  Next came the Muslim invasion and mosques–the iconic example is the Mosque in Ahmedabad.

Crafts in Gujarat are unequalled. In fact, the Gujaratis were the teachers for many of the craftspeople of Rajasthan.

Gujarat has 3,500 of them, so no matter when you go you will probably enjoy at least one. The three-to-four day Rannutsav festival near the beach in Kutch is one of the most popular. Held on the full moon in December, Rannutsav celebrates the region’s indigenous culture with folk music, performances and dances and, most significantly, traditional arts and crafts.  Also, a delight is the January Kite Festival in Ahmedabad and the Vautha Animal Fair in November..

Considering that Sikkim, a Himalayan mountain kingdom, borders China, Bhutan, Nepal, and India’s West Bengal, it’s not surprising that so many different languages are spoken here—11 official ones at last count. The population is mostly of Nepali descent, but many others have immigrated from nearby countries. 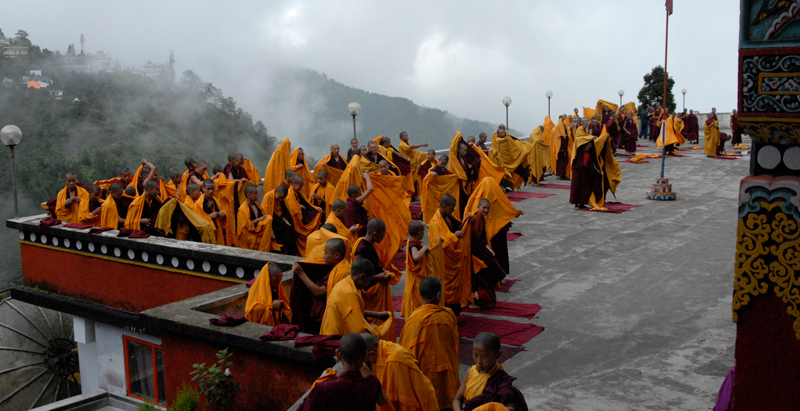 Not very.  Sikkim is the fastest growing state in India, with about 610,000 people, but its 2,740 square miles make it one of India’s smallest. Plus, a third of Sikkim is covered by Kanchenjunga National Park, a UNESCO World Heritage site and home to the snow leopard and other rare animals.

Mountains and valleys. Traveling to India has never looked so beautiful! To nature-lovers Sikkim is a paradise with an incredible diverse topography, flora, and fauna. It’s one of India’s three biodiversity hotspots, meaning it’s a region of exceptional biodiversity that is in danger of destruction. Yumthang Valley, the lush “Valley of Flowers” at 11,800 feet is one of the world’s highest valleys. Tsomgo Lake reigns at 12,400 feet.  And Kanchenjunga (28,169 feet), which means “The Five Treasures of Snows,” is the third highest peak in the world and the highest in India.

Religious festivals are mostly those of the Hindus and Buddhist and occur quite frequently. The holiest of the holy Buddhist celebrations is Saga Dawa, held on the full moon day of the 4th month of the Tibetan Lunar Calendar around the end of May. In fact, the holy festivities last the entire month.  Tibetan Buddhists take full advantage of this month-long opportunity. Saga Dawa honors the day of Buddha’s birth, enlightenment, and death and is an important holiday. In Sikkim, as elsewhere, a tradition is for masked lamas to perform ritualistic dances, while costumed clowns keep the spectators in high spirits. 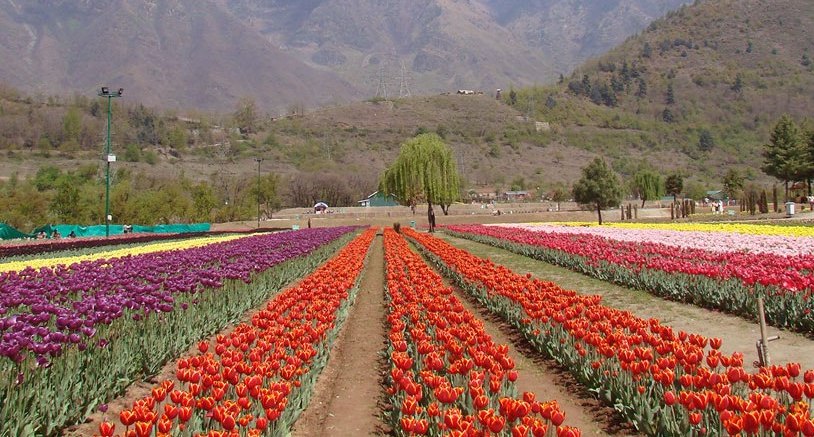 It’s the only state with two names and a state capital that changes with the seasons: Srinagar is the summer capital and Jammu in winter.  In fact, it’s the only state in which followers of Islam are the majority of the population.

About the size of Kentucky. The region has been fought over by India, Pakistan, and China since the end of WWII, but the 39,000-square mile state of Jammu and Kashmir has been an Indian state since 1947.  Nearly 13 million people live in this land of lush valleys and sky-touching Himalayan peaks. 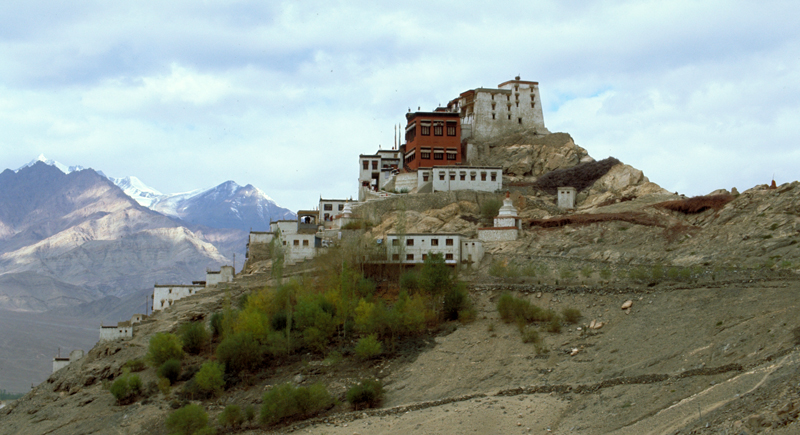 Religious diversity. Hindu’s are a majority, Muslims predominate in Kashmir, and the remote region of Ladakh—the “Land of High Passes”—is Buddhist. Ladakh has been home to Buddhists since the 8th century, is often where the Dalai Lama goes to teach and is the western part of the territory that encompassed Tibet.  Today’s Ladakh is a refuge for those fleeing the Chinese portion of Tibet, and boasts a Buddhist culture more intact and authentically Tibetan than that found on the Chinese side.

Each religious group, including Christian and Sikh, has its own holidays but the people tend to celebrate all of them with equal fervor. One of the most popular is the Hemis Festival in Ladakh celebrating the birthday of the Guru Padmasambhava.  Masked dancers perform the story of the Guru fighting off evil demons.  Horns blare and drums beat, creating a cacophony of sound that lasts for hours. Those traveling to India should not miss out on this incredible event.  Also, well worth seeing is the September Ladakh Festival, celebrating the diversity and culture of the area.

Looking for a way to experience more of India? Travel with a local Myths and Mountains guide to be immersed into the culture and traditions of each Indian state. If you’re interested in crafting a custom trip to India, you’ve come to the right place!