It took me 36 hours and three flights to get to Dawei.  Although it’s just some 1200 miles from Kathmandu, my point of departure, the cheapest and best connection took me from Nepal to Doha, Qatar; to Yangon and finally to Dawei, the gateway to Myanmar’s Mergui Archipelago. Sometimes traveling from one place to another in Southeast Asia is an exercise in “You can’t get there from here!” Trust me, it is easier to travel to Dawei from San Francisco, Los Angeles or New York.

The long journey gave me time to think about how far Dawei had come from a 9th century village to be Myanmar’s first Special Zone (SEZ). My goal for this trip to Dawei and other mainland towns on the Mergui Peninsula, was to scout out possible new trips to Myanmar. I fell in love with Dawei.

Only recently have roads and trains reached Dawei, and few Western tourists venture to this southeastern peninsula of Myanmar that touches Thailand on the east. Most tours to Myanmar focus on some of the 2000 pagodas and temples far north of Dawei.  But this fourth largest country in Asia with its warm, friendly people has far more to offer than those ancient shrines, and Dawei is just one of many magical places.

A Brief Look Back at Dawei

Dawei wasn’t always a backwater. In the 11th century, this region along Myanmar’s Tenasserim coast had already evolved from a small village in a Dawei River estuary to a bustling sea port and home to several tribes of fisherman, including the Mon, Kayin, and Dawei people.

Until 1974, Dawei’s history was like the ball in a ping pong match, bouncing from one ruling kingdom to another. Every time Thailand invaded Myanmar, the Thais had to go through Dawei and capture the town along the way.  Then, when Myanmar attacked Thailand, the Burmese traversed and attacked the Kingdom of Dawei once more.

Finally, the town passed back to Burma until the British took over in 1826. They named the town Tavoy and some still call it that. Independence came after World War II, and in 1974, after Thailand claimed a chunk of the Tenasserim coast, Dawei became the principal town of the Dawei District of the Tanintharyi Division of Myanmar.

Needless to say, the historical tug of war between Siam, Burma (today’s Myanmar) and the Brits, plus the influence of other ethnic groups, has created a fascinating cross current of cultural influences. I saw traces of all those influences in the crafts, the food, and the personality of the people who live along the Dawei coast. 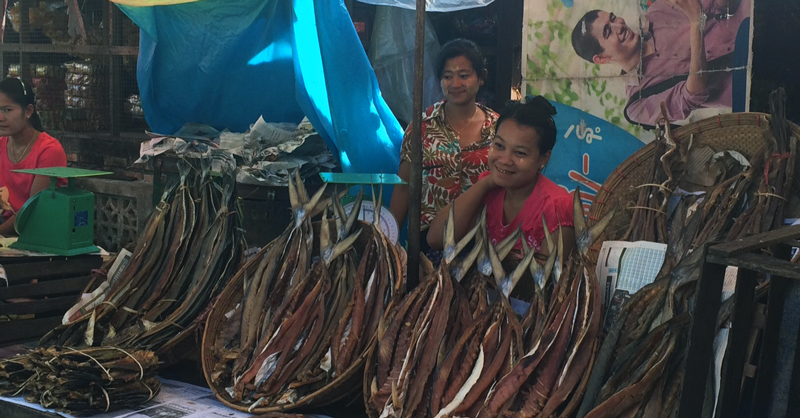 At one point, Burma was the largest, richest, and most powerful country in Southeast Asia, and Dawei was a port-of-call for traders and fishermen, though a largely undeveloped one. Today, it’s been called a “sleepy” or “laidback” tropical town. With its wooden houses and colonial-style stucco buildings, lovely beaches, polite people, and absence of traffic jams, I can see how visitors might get that impression. For me, it was a welcome escape from the bustling shops and noisy streets of Yangon.

The town is amazingly clean, and the residents are very proud of that. They employ three private waste collectors and one government one!

There are about 90,000 people, 100 monasteries, 7 churches (the first Baptist conversion in Myanmar happened here) and 4 mosques.   Buddhists, Muslims, and Christians live peacefully together with no problems.

Dawei and the entire Mergui Archipelago of over 800 islands is endowed with one phenomenal, white sand beach after another.  On one day at the beach, I watched the fisher folk sorting, drying, and cooking fish, mending nets, and just relaxing.  Kids were playing, some newly born puppies were toddling off on shaky legs, mothers were nursing babies. It was a whole happening on the shoreline of the Andaman Sea. 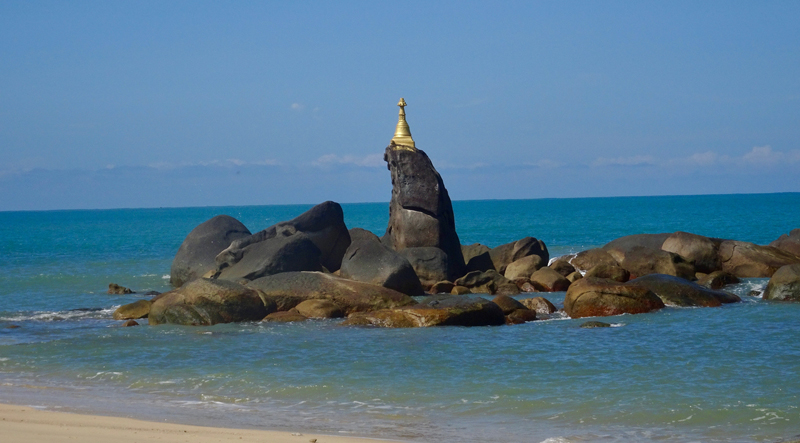 When to Go to Dawei

Be prepared for heat and humidity. Dawei is tropical and has a tropical monsoon climate.  The temperature is fairly constant but the region is one of the wettest in Myanmar during the May to October monsoon season.  I toured the region in late October, and the weather was in the low nineties, but so was the humidity!

November until March is the best time to visit, and a perfect time for holiday travel.  April – June are the hottest months when 90 degrees can feel like 100.

What to Eat in Dawei

Okay, I admit it, the shrimp are not as big as my forearm. But, trust me, they are BIG. And fresh. And delicious.  In fact, seafood is Dawei’s best culinary offering. It’s typically broiled, grilled, or deep fried.

The markets offer a variety of dried fish, as well as a wide diversity of fruits and vegetables. Some of the food comes from Thailand, India, China and other countries where pesticides are used. Because those imported foods cost less than the locally grown organic fruits and vegetables, the locals buy them not knowing the difference.  This cuts back on income for Dawei farmers and drives many from the business. 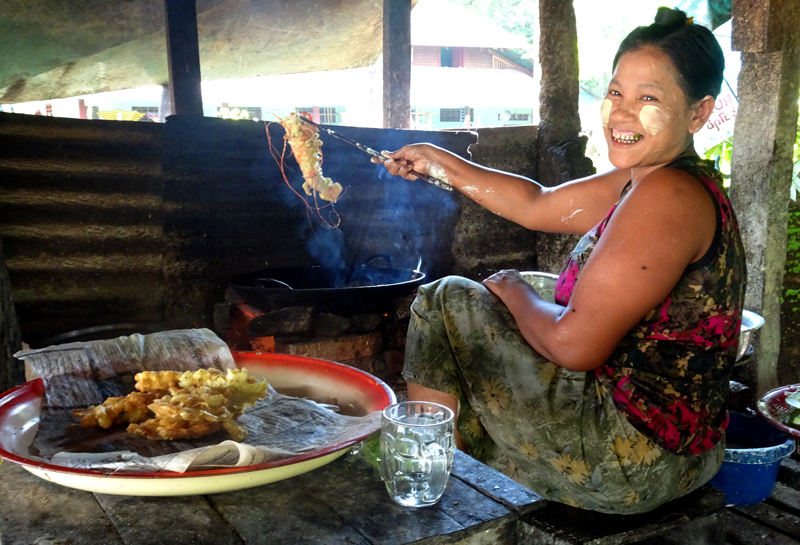 Imports have also affect the market for hard goods.  India used to be the major provider of clothing, batteries, toys, and other products.  Now much is made in China – of course it was cheaper.

Myanmar is well-known for its crafts, many of which have achieved the status of art and are highly valued by collectors.  Each region seems to have its specialty from bronze work to embroidery, and it’s still possible to buy directly from the artisan throughout the country.

The town of Dawei is known for broom making, local pottery, and textiles, especially the intricately patterned longyis that men wear like a full-length skirt.

By strict definition a cheroot may not be a craft item, but don’t tell that to the women who make the local cigars by hand.  This lady is adding the filter, made from a corn husk, to the cheroot. There are no chemical additives and the women boast that the cheroots are all natural. 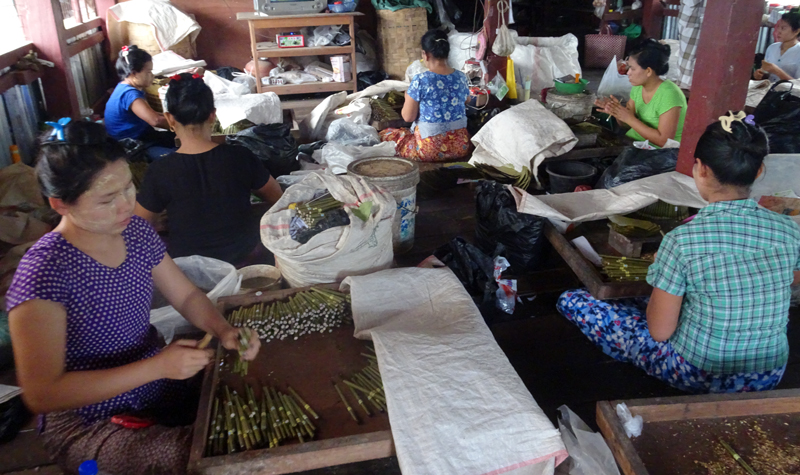 And About Those Pagodas 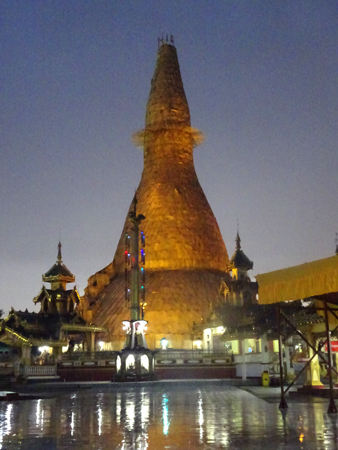 Temples and pagodas are not limited to Bagan and Yangon. Dawei has its share.  Shin Moe Thi a 15th century pagoda is the oldest. Most important, however, is the Shwe Taung Zar Pagoda, which also boasts a small museum.

Yes, you do have to remove your shoes to walk around or climb up pagodas and yes, you are expected to do so…not necessarily because of the architecture, but because it is important in this world, to pay respect to the Gods.

Thinking About Traveling in Dawei?