No one knows for sure when mandalas were first created, but both ancient and modern cultures use them as objects of meditation. Wherever they appear across the globe, mandalas take a similar form: a circle containing a symbolic geometric design. To the Aztecs, a mandala also served as a calendar with symbols representing the gods. Another depicted the weather. Celtic mandalas often represented the holy trinity. In Hindu tradition, the deities often hold the center of the mandala (Sanskrit for circle) until it is destroyed at the end of a ritual. The astrological zodiac still in use today is a mandala. To Buddhists, mandala designs often were—and continue to be—sacred depictions of the universe and its many deities.

In Nepal, Tibet, Bhutan, Ladakh and other Himalayan Buddhist countries, a mandala can be two or three dimensional and even take the form of religious dance. Some mandalas are paintings or scrolls and others are made of sand. Scrolls can be carried along when traveling, so the Gods are never left at home.

Colored sand, blended with dust or precious stones and sprinkled on a flat surface by specially trained and initiated monks can replace canvas and paints for a festival mandala. At the end of the festival, after the viewing, the mandala is destroyed, the sand swept up into a jar and then emptied into a body of water as a blessing for the earth and all sentient beings.

Stupas or temples are basically three-dimensional mandalas and homes of the gods. When you explore Swayambunath Stupa in Nepal and look at the design under the large thunderbolt or dorje at the top of the main staircase, you will see the mandala for the entire temple complex etched below in bronze. Every Buddhist temple has its own mandala – basically its architectural plan.

Monks can even dance a mandala, an example being the Kalachakra dance done at many festivals throughout the Himalayas. 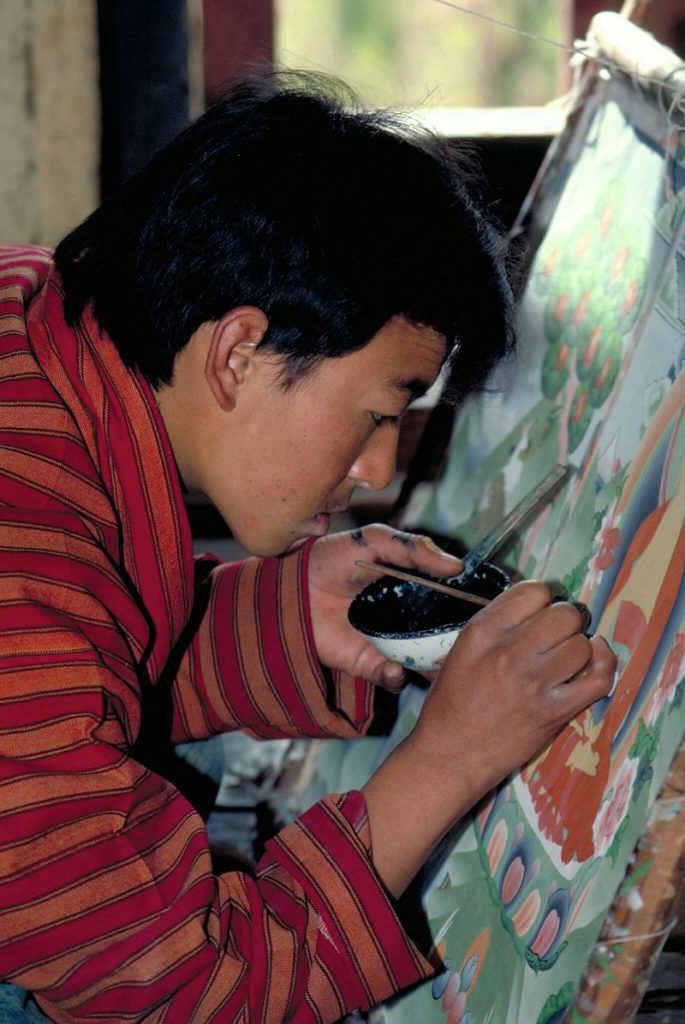 During a journey through the mountains, the wanderer often sees thangka paintings of classic Tibetan Buddhist mandalas hanging in temples, painted on the walls of religious institutions or above the altar in local homes. Common is a circle within a square within another circle or a special deity surrounded by other deities or symbols. In the case of the Kalachakra mandala, as many as 700 deities crowd the thangka, with the Kalachakra deity, a symbol of time, at the center.

Transforming our normal, everyday minds into enlightened minds that benefit all sentient beings is the goal of meditating on a mandala. In some cases, as with the Cosmic Mandala, the purpose of meditation is to acquire knowledge of the essence of the universe and its very creation.

In others, where you meditate on a mandala with a deity, one does not worship the deity in the western religious sense of “worshipping God.“ Rather you meditate in order to become that deity and embody the principal that the deity represents – wisdom, compassion or perhaps the ability to heal others or yourself.

And a Mandala Can Be Just for You

On a final night in the countryside with a group I was with in Bhutan, Sangay, our guide, taught everyone how, using the ancient tradition of making a sand mandala, we could delve deep into our own psyche to resolve a modern-day need or problem.

Sangay used the colored sand to represent different human emotions. By contemplating each color’s meaning, we could uncover our true feelings about something bothering us, and transform the colorful sand mandala into a tool for self-awareness.

The qualities he attributed to the colors were:

As we placed the grains of sand of each color in our own mandala space, we questioned ourselves about the color’s attribute, starting at the center to make our design and moving outward. For instance, if we were angry, we would put blue at the center. Then, ask what is the cause of this anger? Is it desire (red)? Are we jealous of another person’s success (green)? Is our own pride/ego (yellow) getting in our way? When done making our mandala, we would be not only calmer, but have an understanding of where our dominant emotion, in this case anger, came from. The sand and the design are transformed into a prompt for self-awareness.

In the end, you toss the sand away, and so goes your problem. I couldn’t help but wonder as Sangay brushed the sand into a bag if he knew that the famous psychiatrist Carl Jung painted mandalas.

My mandalas were cryptograms concerning the state of the self which were presented to me anew each day. In them I saw the self – that is, my whole being. –Carl Jung

Enter your details to receive travel ideas, trending destinations, and travel tips in your inbox!