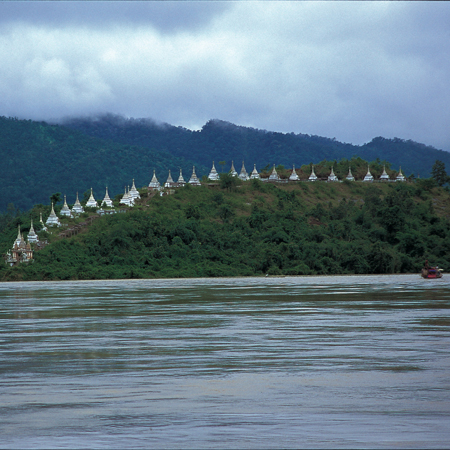 Myanmar is still a mysterious country, with remote rivers, jungles and mountains that are almost untouched by travel and tourism. The Chindwin River, the largest tributary of the Irrawaddy, flows through one such remote part of Myanmar, inhabited by many tribal communities. The river itself rises in Kachin State at the confluence of 4 rivers – the Tanai, the Tabye, the Tawan, and the Taron. High mountain ranges and dense jungle forests make access to the remote Chindwin area extremely difficult and the river serves as the best highway.

This Chindwin area also forms one of the borderlands between India and Myanmar, and played an important role during the World War I and II. The towns along the Chindwin were caught up in the warfare between the Japanese Army and the Indian Assam Rifles, as well as soldiers from India fighting for Indian independence from the British.

You will travel upriver from Mandalay, visiting small villages, markets, areas occupied by the Japanese during World War 11, villages where jade is mined and people panned for gold, as well as parts of Nagaland that have gone back and forth between Myanmar and India over the years. The trip will end in the remote village of Homalin, where you will catch a flight back to Yangon.

Arrive in Yangon. Spirit of Myanmar sunset at Shwedagon. Dinner at House of Memory.

Fly to Bagan and explore the area, including cave temple and sunset boat ride on the Irawaddy.

Fly to Mandalay and enjoy a city tour, particularly of the local home handicraft workshops Sunset at Mandalay Hill.

AM bathing of Buddha at Mahamuni Paya. Head out to Amarapura, Sagaing Hills, to see nunnery and Buddhist Academy. Sunset at Ubein Bridge.

Transfer to dock at Monywa. Board boat

Dock in Homalin. Transfer to airport and fly back to Yangon. Met and taken to hotel.

Transfer for your flight home.