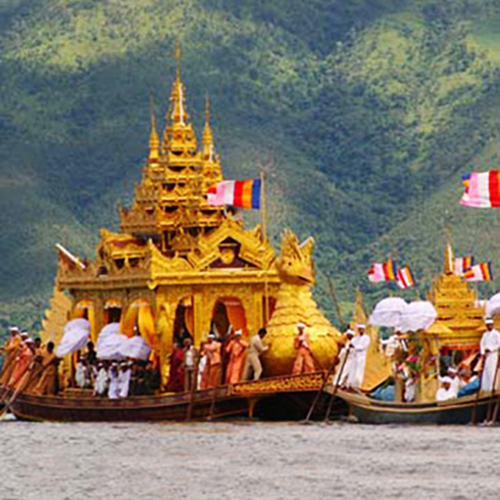 Myanmar is a magical country where people kiss by sniffing, there are eight days in a week, and the major unit of currency has been determined by astrology! Fairytale pagodas in cotton candy colors of pink and blue dot the landscape, people cover their face with white powder from the bark of a tree, and clouds and mist cast a romantic tropical haze over the country. It is a country caught in a time warp, isolated from the rest of the world for more than 30 years, and is leaping precipitously into modernity. Each day new shops spring up. Modern hotels are under construction in every city. Restaurants are catering to a rapidly growing tourist market.

Myanmar is the largest country in Southeast Asia – twice as large as Vietnam and approximately the size of Great Britain and France combined. Within the borders are as many as 135 nationalities each with their own languages and dialects. The history of Myanmar predates the time of Buddha in the fifth century BC. In the early 1800s after a series of wars, Myanmar became a British Colony, and only on January 4, 1948 it became a sovereign independent nation. During World War II, Myanmar suffered terribly and was occupied by the Japanese from 1942 until the return of the Allied forces in 1945.

This trip covers some of the highlights of Myanmar, traveling from Yangon, at the mouth of the Irrawaddy River, up to Inle Lake in Shan State, east to Pindaya; northeast to Mandalay and the ancient kingdom of Amarapura; across the Chindwin River to Monywa and the south to Pagan, city of 5000 pagodas; and back down to Yangon.

Then, from Yangon, there is an extension to Ngapali, for those who wish to enjoy a bit of beach time.

Drive to Pindaya and visit caves. Enjoy the festival.

4AM visit to Mahamuni Temple to wash Buddha. Head out to Amarapura, Sagaing Hills and Inwa.

Drive Pakkoku, visiting villages along the way. Take a 2-hour boat ride down the Irawaddy to Bagan.

Excursion to Mt. Popa And Salay.

More touring in Bagan including market and laquerware. Lunch at Moon Restaurant. PM flight to Yangon.

Depart Yangon with free day with car available until departure.