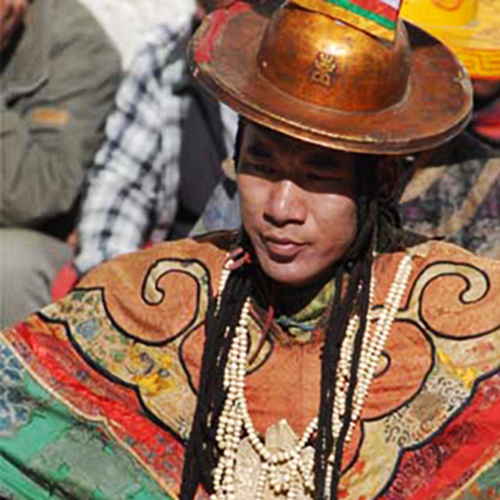 Every spring, at the palace in Lo Manthang (Upper Mustang), there is a colorful Buddhist festival called Tiji, hosted by the Crown Prince of Mustang. Then, in late summer, when other parts of Nepal are suffering from summer rains, Mustang is host to the Yartung Horse Festival, with all its gaiety, dancing and incredible athletic prowess.

Join Myths and Mountains for these marvelous celebrations in a medieval kingdom like no other. Unlike many festival trips to Lo Manthang, you will attend the entire 3-day festival, not leaving early to rush back. In this way, you can get a sense of the full meaning of each festival day, as they are different yet do form a whole.

A strip of territory where everything is Tibetan, as Tucci wrote, “from the landscape to the language, from the people to the monasteries,” the area of Lo Mustang projects out from Nepal into the Tibetan Plateau north of Dhaulagiri and Annapurna, encompassing the entire upper drainage of the Kali Gandaki. Used as a staging point in the early 70’s for CIA-trained Tibetan a guerrilla to infiltrate into their homeland, the area was closed to tourists by the Nepali government until recently. Unlike the rest of Nepal, the area more closely resembles Tibet, its northern neighbor. The arid hills are bathed in pastel hues, medieval forts and palaces protect the trails from invaders, and isolated villagers live as they have for centuries.

Note that this itinerary allows for two options:

Fly to Jomsom and trek to Kagbeni

Hike through Tangbe on your way to the village of Chele

Hike to Ghiling with lunch in Syangbochen

Trek to Ghami and then on to Tsarang

First day of Festival – Tiji in June and the Yartung Horse Festival in September.

Gar Gompa and on to Dakmar* (or charter helicopter to Kathmandu, jump to Day 18)

Visit cave temple and lunch in Samar. Overnight in Chele or Tangbe

Depart Nepal (Day 14 if you helicoptered out of Lo)