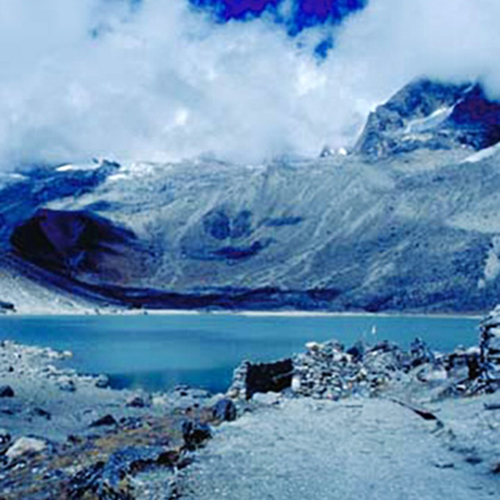 The Solu area of Nepal boasts beautiful views of Everest, Shorung Yu La, Kanteiga, other snow-capped mountains; some of Nepal’s most interesting monasteries; friendly Sherpas; and trekking routes with few tourists. You begin with a drive to Phaplu. Then, with views of Shorung Yu La, the holiest mountain to the Solu Sherpas, you will climb to Junbesi, site of the first of Rural Education and Development’s libraries. After visiting the town, you walk to Tuptencholing, the most important monastery in the area and one of the most famous in all Nepal. From Tuptencholing your trek takes us up over the ridge, with spectacular views of the Himalayan range, down to the banks of the Beni Khola, and then up to Dudh Kund, a 16,000-foot glacial lake at the base of Shorung Yu La, and one of the most important pilgrimage lakes for both Hindus and Buddhists. After visiting the lake, we will descend to the charming monastery of Tragshindu and then on to Chiwong, with its beautiful frescoes, before returning to Phaplu and flying back to Kathmandu.

In the spring, you can enjoy the Dumje Festival in Junbesi; and, in the fall, Mani Rimdu in Chiwong.

Tour the Swayambunath, Pashupatinath and Bodhanath.

Hike to the monastery of Tuptencholing, visit monastery and camp beyond.

Head to an abandoned cheese factory and enjoy sights of Shorung Yu La.

Contour over to the Beni Khola River.

Hike up to Dudh Kund.

Hike down to Chiwong Monastery.

AM in Chiwong. Mid-afternoon downhill to Phaplu.